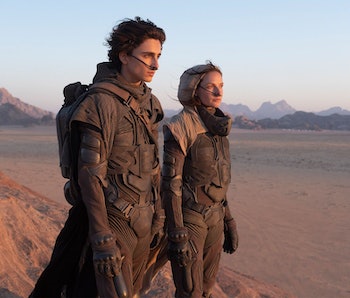 The relationship between Paul Atreides and his mother Lady Jessica is one of the most pivotal aspects of the first third of the novel Dune. Lady Jessica is part of the ancient order of Bene Gesserit, essentially warrior nuns or sneaky all-female Jedi. They can read minds. They can make people do things. So since Paul has some of their powers, his destiny is a very big deal. A new rumor about the first trailer for the 2020 adaptation of the sci-fi classic, claims a pivotal scene involving Paul and the Bene Gesserit Reverend Mother has changed. But, after digging in the sands of Arrakis, it turns out this scene is actually totally faithful to the book.

Here's why the first Dune trailer is (probably) honoring something from the Frank Herbert book, and why the internet previously thought very differently. Spoilers ahead.

While rumors about the Dune 2020 trailer have swirled in the sand for months, it now seems that by September 9, 2020, US audiences will be able to see the Dune trailer. Total Film says the trailer is already playing with U.K. and Canadian screenings of Tenet, and it opens with a scene like this:

"The teaser starts with Timothée Chalamet's Paul Atreides standing in a large room, followed by a look at a box. Cut to Rebecca Ferguson's Lady Jessica, Paul's mother, who's holding a needle to Paul's neck...Dune readers will recognize this as 'the box,' a nerve induction device that causes the victim to feel intense pain and is used to test self-control. "'What's in the box?' asks Chalamet's Paul. The response from a veiled Lady Jessica? 'Pain.'"

If this description is accurate — but we've got the Reverend Mother holding the poison, not Lady Jessica —then the first scene in the trailer faithfully recreates an early moment in the novel. And, based on our independent source, the veiled woman is not Lady Jessica (Paul's mom) but instead, the Bene Gesserit Reverand Mother, so we're good. Basically, this is as it should be. It sounds like the scene in the trailer, in the film, will play out exactly as it did in the book. Total Film's description seems to be correct, to a point, but the veiled woman is very much not Rebecca Ferguson as Lady Jessica, but instead, Charlotte Rampling as the Reverand Mother.

While the Dune (2020) trailer is still not available for online and Warner Bros. is going to great efforts to keep leaked videos and screenshots from spreading online, Inverse was shown several images from the trailer that confirm the character in the scene is indeed Reverand Mother, effectively proving Total Film got that one detail wrong.

In the source material, Jessica is not happy about the Reverend Mother testing Paul with "the box." Basically, the Reverend Mother wants to see if Paul can control his animal impulses. The needle is there as a punishment if he does. The Bene Gesserit tests to see if you are truly "human," more than just your automatic reactions.

So, even though — for a hot second — it seemed like Lady Jessica had been swapped for the Reverend Mother, that's not the case. The Reverend Mother giving this test makes sense and sticks with the book. It's literally her job to come and see what is going on with Paul's maybe-messiah status. If Pauls' mother gave him this test, it's a little bit more hardcore, and would slightly undermine Jessica's role as Paul's mom. I mean, we know she loves him, and she lets the Reverend Mother do the test, but putting the poison in her hand would have been weird. Thankfully, it seems like that's not the case.

Lady Jessica is a pretty big badass in the first Dune book. If there are changes to her character in the new film, it seems like they won't be at the beginning. And frankly, there probably doesn't need to be many changes. The big takeaway from this leaked trailer footage is simple: It sounded like something was being changed, but it turns out this movie, and this trailer sound faithful as hell.

CORRECTION: This story has been updated in light of new information. A previous version of this story speculated that if Lady Jessica had taken the place of Reverend Mother in this scene, it would be a big deal. Inverse has verified from an independent source that the Total Film description is inaccurate. Lady Jessica is not holding the poison needle (called Gom Jabbar) to Paul's neck. We regret the error.