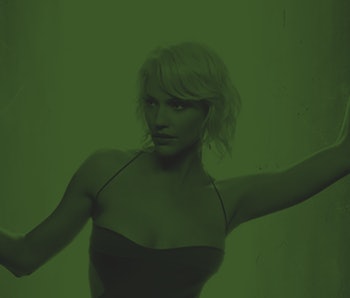 At the beginning of most episodes of the rebooted version of Battlestar Galactica, we were told that the robotic Cylons had a mysterious and hidden "plan." Like the Hosts on Westworld, the humanoid looking Cylon "Skinjobs" blurred the narrative line between the definition of who was truly "alive" and whether or not an organic human had more or less free will than a synthetic one. Also, just like the Hosts of Westworld, the Cylons on Battlestar were often super hot and liked shooting people with guns.

But as Westworld Season 3 makes its complicated Host mythology even more confusing, it's time for science fiction fans who remember the aughts to ask a serious question: Isn't Westworld just Battlestar for dummies? And if so, could we at least get sweet spaceships back in the mix?

Spoilers ahead for Westworld Season 3 Episodes 1-6 (and all four seasons of the rebooted Battlestar Galactica.)

As a longtime fan of science fiction, there's something kind of retro about Westworld Season 3 that makes me want to like it. After two seasons of dodging the "real world," Westworld has moved out of the robot theme parks, and in doing so, theoretically, raised the stakes.

The promise of Westworld Season 3, from the outset anyway, was to do something the show had never really attempted before: Tell a straightforward story in which the stakes (not a timeline twist) were what mattered. This would have been a change from what Westworld did in Season 1 and Season 2: make you keep watching with the hope that something about present events would be explained through complicated backstory and flashback that you originally thought was happening in the present. (See: William's story in Season 1 and Bernard's "scrambled memory" in Season 2.)

In other words, the real test of Westworld Season 3 was whether its characters and concepts were good enough to work without a bunch of narrative lies and tricks. Are we invested enough in the story of Dolores leaving Delos and entering the real world to stick with a slightly more straight forward Westworld?

The answer, for the most part, is no.

Like in the seasons before, Westworld doesn't have much going for it beyond presenting some confusing questions and then answering those questions in a half-assed way. If you strip away the arbitrary mystery box-building (What's up with Caleb? The Man in Black? Dolores' clones?) all you're really left with is a story about humanoid robots who are in open rebellion, but occasionally, pause to play some head games with human beings.

And if that's the only reason why we're watching, then the hard truth is Battlestar Galactica did this so much better, and it also did it in space.

Battlestar Galactica did it better

In Battlestar Galactica, the humanoid Cylons slaughter the vast majority of humanity in the pilot episode. Obviously, Dolores doesn't have the resources of the Cylons, but from a narrative point of view, this allowed the audience to start with the assumption that all the Cylons were terrible, and then work backward.

Westworld has kind of done the reverse, which left little room for any kind of dramatic grey area. Human beings have so obviously mistreated the Hosts that we're basically just rooting for Dolores to kill everyone. Westworld's viewpoints are so nihilistic that it removes the moral grey area from any kind of thought experiment you might in terms of who's "side" you might want to take.

In Battlestar, you're told to take the side of the humans, at first. Then, as the humans start to torture and abuse any Cylons they capture, things get dicier and more interesting. Season 4 culminates in some of the Cylons and some humans joining forces against different Cylons, asserting that the difference between a strictly organic human and a Cylon is totally moot.

Westworld Season 3 has been toying with this idea, too, but because all the characters are so angsty, violent and pissed-off, it's hard for the audience to care. Even though Battlestar Galactica was a super-dark show about humans hunkering down in spaceships and hiding from murderous robots, there were also nice things that those characters wanted. Whenever Battlestar got too dark, you'd then get a moment where Adama would read books to President Roslin while she was sick in bed. Or maybe a few characters who liked each other would make out.

This may sound cheesy, but it's actually smart. Mixed into all the questions about "Who is a Cylon?" Battlestar gave its characters something to do other than just wait to be revealed to be not-human. Sure, when Torri, Galen, Col. Tigh, and Sam all listened to Bob Dylan in Season 3 and found out they were Cylons, it was a big deal, but it wasn't the entire show. In Season 4, the series basically shrugged and said, yeah, sure, they are Cylons, but all of these people have bigger problems than to worry about if they are secret robots or not.

Westworld is incapable of doing this

Time after time, Westworld defaults to plot twists over character work, and shocking violence is always the quickest way to get there. In Episode 6 of Season 3, the Man in Black has a therapy session with all of his past selves. This ends with him brutally murdering them. We're meant to think this shows he's changed because he's killing his past. But because a squeamish scene of violence is the default storytelling mechanism for Westworld, this scans as more of the same. The Man in Black can't murder any real people, so now he's just murdering himself.

Compare this against the Man in Black's closest analogy on Battlestar: Col. Tigh, a hard-drinking jerk who hates Cylons who ends up falling in love with a Cylon (well, more than one) and overcoming his terrible drinking problem. In Battlestar, characters who were total assholes didn't become "good" by looking at the camera and saying "I'm the good guy." They actually changed and grew, mostly because they wanted things and had feelings.

Everyone on Westworld is so cold and bitter, it's hard to really figure out who to root for. Which, is sort of what the show wants. The only reason you're watching is to have the puzzle solved for you, but as is proven time and time again, Westworld has utter contempt for its characters because they really are just pieces of a puzzle and nothing more.

By the end of Battlestar Galactica, most of the series' biggest questions were never answered in any kind of way that was remotely satisfying. And yet, Battlestar remains the gold standard for how you do contemporary sexy robot revolution in a sci-fi TV show. The writers of that show — including Ronald D. Moore — knew that complicated mystery plots only get you so far. The audience has to invest in the characters, and actually not care if those characters turn out to be secret Hosts or Cylons.

Westworld doesn't do this. Instead, it puts all of its eggs (or pearls) into the mystery box/violent twist basket week after week.

The problem with Westworld's twists

These twists might get us to the next episode or season, but they won't encourage rewatchings anytime soon. The reason why people still debate about the (maybe bad?) ending of Battlestar is that people actually cared about the Starbuck. Even though Dolores has made copies of herself — like literally all the Cylons on Battlestar — those copies aren't treated as real characters. When they approach something that resembles change — like when Charlotte/Dolores starts to care for her "family" recently — those things are taken away to make sure these robot Hosts can get back to their factory settings of killing everyone and being super nihilistic.

Of course, Westworld blew-up the car with the little kid and the husband. God forbid they actually explore the stakes — Battlestar style — of what it would be like for a Host to take care of a human baby. Boomer did it on Battlestar and so did Number Six.

In fact, the first episode of Battlestar, Cylon Number 6 murders a baby in the first hour. By the end of the series, she's one of the most sympathetic characters in the series and is actually in favor of making peace with human beings. Like Dolores, Six — and her various copies — went through a lot of hell. But throughout it all, the character changed and became more interesting.

Battlestar started as nihilistic and worked its way toward something more complex. Westworld began its journey by talking about "violent delights having violent ends." Three seasons later, it's just gotten more violent and far less delightful.

Westworld likes to make a big deal about people and Hosts being stuck in their loops, but when it comes to great robot fiction, breaking that cycle is what makes us care.