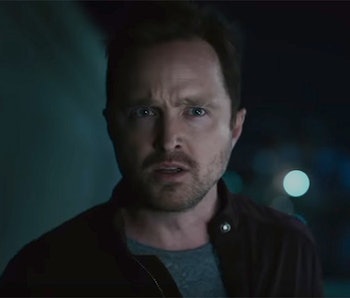 Other than computer-brain mastermind Serac, the biggest mystery box character of Westworld Season 3 is easily Aaron Pauls' seemingly blue-collar goody guy Caleb. Like William in Season 1, Caleb's motivations are as confusing as his loyalty to Dolores. Before the end of Westworld Season 3, some kind of huge twist about Caleb's murky past is bound to come up, and it will almost certainly impact the show's future.

In Season 3 Episode 5, "Genre," we're given a few new clues about Caleb's past, but what does it actually all mean? Here are three theories that could explain Caleb's past and help us answer the biggest Westworld WTF this season: What is Caleb's whole deal?

Early in the episode, at the very beginning, when Liam pathetically tries to buy-off Caleb's loyalty, Caleb prompts Liam to check out his Incite file. "Tell me who I am!"

At this point, Caleb expected this to make Liam shut-up, a kind of slam-dunk on why the Incite system is so cruel. But it backfires. Liam sees something in this file that makes him afraid of Caleb, which indicates he knows more about Caleb's background than Caleb does.

Then, toward the end of the episode, Liam tells Caleb, "You don't even know who you are. You're the worst of them." This opens up into a bunch of flashbacks in which we see Caleb leading a hooded prisoner into a room, seemingly for execution.

After Liam is shot, Caleb's flashbacks intensify, and we again see the death of Caleb's army buddy, Francis. This scene then gives us new footage of Caleb with some kind of googles on, thrashing around in a bed, being observed by someone who could be a doctor. As Liam dies, and Caleb asks him "Who do you think I am!!?" Liam simply says, "You did it."

So, what did Caleb do? Who is he, really? And how much does Dolores know?

Elsewhere in the episode, it's also revealed that Serac sent his brother to a weird looney bin in which patients were observed and put through a series of behavioral experiments. What if this happened to Caleb, too?

But the twist is, he was brainwashed in a virtual reality simulation that made him believe he'd been in the military and was forced to kill people in combat. The flashbacks we see in "Genre" strongly suggest Caleb was not in the actual military. Instead, he looks more like a plainclothes assassin than someone in the Army.

So here's the theory: Serac's organization brainwashed a handful of people who were outliers to the system (like Serac's brother) and then, after reconditioning them with VR simulations, used them as hitmen to take out Serac's enemies.

In Episode 1, Caleb strongly implies he's actually aware that he was "observed" by doctors during his time in the military, which seems to imply that on some level, he might suspect that some of those memories were fabricated, or at the very least, manipulated.

Westworld theory 2: Caleb is in a simulation

Earlier in Westworld Season 3, Polygon floated the idea that RICO — the "get money mother fucker" phone app that Caleb uses — is actually proof that Caleb lives part of his life in a virtual simulation. This is a fun theory, but what if it doesn't go far enough?

What if the "real world" as it has been presented to us so far, is actually not the real world. Put it another way" What if what we're seeing is some kind of practice run for Dolores?

In Westworld Season 3 Episode 3, Dolores made a big deal about the concept of "the Mirror World," the notion that INCITE and the super-computer Rehoboam were constantly running simulations of everyone's life, to get an idea of how the future history of the entire world would play out, but what if Caleb has been inside a simulation since the beginning of the first episode?

Even that far back, one of Liam's shitty friends at a party seemed to tip us in that direction, saying "The contents of this glass contain three-times what my father made in a year. That’s how you know for sure that none of this is real. We’re living in a simulation."

Assuming Liam is hip to this kind of duality (which feels iffy) this could explain why he fears Caleb: He's opened the door to let Dolores run a simulation on how to take over the world, and because of Caleb's cooperation, she's learning quite a bit.

Either way, if Caleb is living in a simulation, that means, a huge portion of what we've seen so far in Westworld Season 3 far hasn't been "real." This theory would also explain why Dolores was unharmed by those bullets in this episode, despite being nearly killed by lethal drugs and bullets in Season 3 Episode 1.

Theory 3: Caleb is a Host

The philosophical principle, Occam's razor is one we generally accept to mean that when given a variety of options, the true answer is almost always the one in which we can make the fewest assumptions. In other words: the simplest explanation tends to be the truest.

With Westworld theories, we'll call this "William's Razor" in honor of the straight razor used by the Man in Black. And we can make the following Westworld fan theory rule: When given a lot of confusing information, it's a good bet somebody is probably just a secret Host.

If Caleb is a host, it simplifies the entire arc of Season 3. The theory would go like this: Serac has been replacing certain kinds of people with Hosts for years in order to create better outcomes for "real humans." This would have been done under the assumption that Hosts can't go rogue, but everything that happened at Delos proved that wrong.

Bizarrely, if Caleb is a Host, it actually gives his character something he doesn't have if he's merely human. If he's a robot Host, and more like Dolores, that means Caleb has free will. And in the universe of Westworld, that's the name of the game.