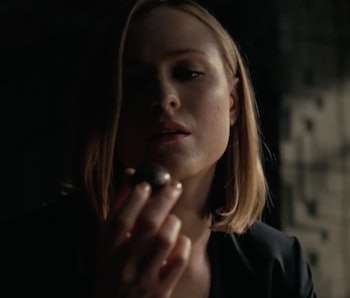 For the first four episodes of Westworld Season 3, one mystery has been lurking around in plain sight: Which other Hosts did Dolores smuggle out of the park in Season 2, and who's really inside the Host body that looks like Charlotte Hale? Well, we know for sure now, but in some ways, that's just led to even more questions.

In Episode 4, "The Mother of Exiles," this mystery has been made clear, but if you were paying close attention in Season 2, you could argue we already knew this was coming — and now that it's confirmed, it could reveal how Season 3 will end.

Freeze all motor functions! Spoilers ahead for Westworld Season 3, Episode 4, "The Mother of Exiles."

Since the beginning of the season, the mystery of which Host was really inside the faux-body of Charlotte Hale has been pretty confusing. At certain points — like in Episode 3 — it seemed like Charlotte's actual personality was starting to reassert itself. At other times, we were reminded that Dolores initially used a copy of Charlotte to smuggle herself out of Westworld at the end of season 2.

And then, there's been the mystery of which control unit is inside Dolores' Host copy of Liam's bodyguard, Martin Connells, with a few fans in the camp that Dolores' old buddy Teddy could secretly be inside.

In Episode 4, Maeve meets a copy of Musashi, a Host she originally encountered in Shogun World in Season 2. Very quickly, Maeve realizes that it's not really Musashi in there. In fact, it's not Charlotte or Connells either. And none of them have been replaced with long-lost Hosts we used to know like Teddy or Clementine. That's because, as it turns out, they're just all copies of Dolores.

Maeve puts it like this when she realizes Musashi isn't himself: "The other pearls, I assume you brought someone else — but you just made copies of yourself!"

The "pearls" Maeve is talking about are the round control units that house the basic essence of each Host. We know Dolores took several of those from Delos' island at the end of Season 2, but what we didn't know until now is that the majority of those Control units were just duplications of Dolores' code. She literally made tiny robot brain copies of herself, and then stuck those duplicate robot brains in new robot bodies that look like different people.

While badass, and certainly a move worthy of Agent Smith from The Matrix, it still makes one wonder: Are all the pearls accounted for?

The short answer seems to be yes. In the short flashback after the credits, we see Dolores talking to Bernard after she brought him back to life at the end of season 2. She's looking at four separate pearls, all while in her new Dolores body.

This seems to be the three Dolores Hosts we're aware of now:

So, who is that fourth one that Dolores is holding? The easy answer is Bernard, and this scene is meant to show us the moment she decides to bring Bernard back to life. This would also seem to explain why the fourth pearl she holds looks slightly different than the other three; it's literally the only one in that row that isn't just a Dolores brain copy.

And yet, what if that fourth control unit/pearl wasn't Bernard? In at least one shot, it looks like it has a little bit of red in it. In Season 2, we learned that all-red control units belonged to "hybrids." A hybrid is a Host like James Delos: someone who used to be human but had their memories transplanted. Bernard isn't exactly based on a real person, but he was loosely based on "Arnold," who was human. So again, the red-tinge on this mostly-black control unit could just imply this was definitely Bernard.

Unless it doesn't. What if in this scene, Dolores had already brought Benard back? Who, then, would that weirdly reddish control until belong to? Thanks to Season 2's post-credits scene, we know that at some point, the Man in Black will be revealed to either have been a Host or have become a Host. Could Dolores have brought a hybrid control unit for William? Is she directly responsible for bringing the Man in Black back into the world?

And if so, why? The end of the episode finds the Man in Black committed to a mental institution, haunted by the memories of his daughter and Dolores. If Dolores did bring him back, it seems clear his story is far from over.

Either way, if Dolores can duplicate her brain into several Host pearls, that means other Hosts can do so too. In Westworld Seasons 1 and 2, it was all about wondering who was secretly a Host. Now, it seems like all we're really wondering is who is secretly... Dolores.