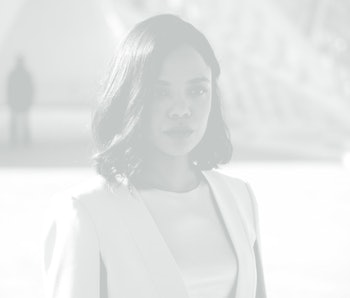 Who's controlling Charlotte Hale's Host body in Westworld Season 3? In a show full of questions, this is one of the biggest after Sunday's premiere, but one subtle Easter egg spotted by a Westworld fan on Reddit could reveal that a character we thought was gone is actually sticking around and controlling Hale as part of Dolores' master plan.

Could Teddy be controlling Charlotte Hale in Westworld Season 3? That might sound ridiculous — especially if you remember how Teddy's story ended back in Season 2 — but it's not totally impossible. And one clue, in particular, makes us think that's exactly what's happening.

First, a quick refresher, because Westworld Season 2 was a long time ago. A big portion of the previous season focused on Dolores and Teddy's adventure through the park as Dolores helped Teddy "wake up" and see the real world beyond his robot programming. Ultimately, this caused Teddy to have a total breakdown, shooting himself in the head after blaming Dolores for turning him into a monster.

Of course, this is Westworld so no Host is ever truly dead. Dolores simply salvaged Teddy's Pearl (Westworld speak for robot brain) and uploaded it to the Valley Beyond (the digital afterlife many of the Hosts escape to at the end of Season 2). So that means Teddy is of the picture in Westworld Season 3, right? Think again.

When Dolores comforts Charlotte Hale (who, again, is a Host whose true identity remains a mystery) in Season 3, the way their bodies are positioned feels eerily reminiscent of how Dolores held Teddy's "dead" body back in Westworld Season 2.

Redditor u/Nigel_Rigel pointed this out in a recent post, speculating that it could mean Teddy's AI brain is actually controlling Charlotte Hale's Host body.

Commenters on the post were quick to point out that Teddy is still in the Valley Beyond, which would make it impossible for him to be controlling a Host in the real world. However, there's one easy way to plug this plothole: What if Dolores simply made a copy of Teddy's Pearl before sending him to robot heaven?

This feels like the exact kind of trick Westworld would pull, most likely with a big reveal and a flashback showing what Dolores secretly did back in Season 2. Of course, we could be wrong. Maybe Dolores just likes being the big spoon, but don't be surprised if Teddy makes a comeback at some point in Westworld Season 3.