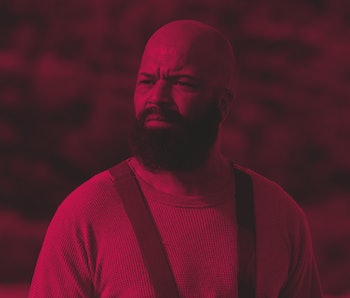 After more than two years, Westworld is finally back for Season 3. While many details are different — like the new out-of-the-park setting — one thing remains unchanged: the writers will still do anything to sneak in an Easter Egg for eagle-eyed fans. And in the premiere, Westworld revealed a new alias for one beloved character that could explain a lot about what happened after Season 2 and where Season 3 may be headed.

Bernard Lowe has changed radically since we first met him. Though he started out as a seemingly innocuous family man and Delos employee, by the end of Season 1 we learned the truth. Robert Ford, the enigmatic head of the company, revealed Bernard was, in fact, a Host replica of Ford's late colleague Arnold Weber. While this was a shock to many viewers, it was obvious to those who noticed a similarity in the names — they're anagrams.

In the Season 3 premiere, Bernard works at a meat processing plant off-world. He spends his nights running trials on himself, further sorting out his identity. When he scans his armband to clock in, his name appears on the screen as "Armand Delgado." Quite the alias, especially considering the name he was using before was also an alias.

Fans on Reddit ran that name through an anagram finder, and user DMLloyd discovered a huge Easter egg: "Armand Delgado" is an anagram of "Damaged Arnold." This hidden "Arnold" could be hugely significant, given that Bernard was just beginning to cope with his identity as an Arnold replica last season.

The "damaged" part is more complicated, and we'll likely have to wait until later in the season to fully make sense of it. While it could be said he is a damaged version of Arnold purely by virtue of being a Host, he's certainly not physically damaged, as he defends himself during a confrontation at the plant with the instantaneous martial arts powers of a newly activated sleeper agent.

Perhaps the twist is not that he is using that name, but that he chose it in the first place. We've seen how difficult it is to recreate a real person as a Host. The name may be a way to remind himself that, though he may be made in Arnold's image, he's not an exact copy. There are still things that make him a unique person.

More literally, if Bernard is "broken" perhaps that means he suffered some damage to his Host body and A.I. mind at the end of Westworld Season 2. If that's the case, this minor Easter egg could set up a huge twist later in Season 3.

While the name provided unlikely insight into Bernard, it's unlikely we'll see it again, as the end of the episode revealed Bernard is returning to the place everyone thinks he ruined forever: Westworld. This time, he's not Damaged Arnold or Armand Delgado, he's Bernard Lowe (but also Arnold Weber.)