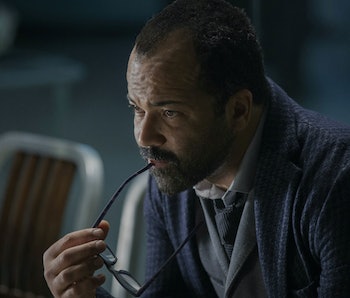 As if finding out you’re a robot isn’t bad enough, Bernard Lowe is having a bunch of truth bombs lobbed his way in the final few episode of HBO’s Westworld, like finally finding out the true identity of one of the park’s creators, Robert Ford’s mysterious dead friend and colleague, Arnold.

If you haven’t caught up with Episode 9 yet, then stop now. Spoilers lie ahead.

In “The Well-Tempered Clavier” we find out that after all this time Bernard Lowe is actually Arnold. After Dolores killed the real Arnold 30 years ago under mysterious circumstances — the details of which will inevitably get revealed in the first season finale — we find out that Ford created a host version of his friend to continue the robotic work they were doing before the accident that nearly crippled the cutting edge advances they were making in the park. But what to name him?

In a moment appropriately reminiscent of Frankenstein, we see Ford’s creation open its eyes and go online for the first time. “I was so involved in putting you together, I hadn’t decided what to call you,” Ford says to his newly created host. “It wouldn’t be right to use his name,” referring to Arnold, “What about Bernard?”

Going from Arnold to Bernard would seem fairly random if it weren’t for another more subtle reveal later in the episode.

Dolores retraces her steps back to Escalante, the town where all the Westworld staff trained the first generation hosts to be more human, and eventually remembers when she went to confession in the small church there before finding herself discovering Arnold’s office. The name on the door features his full name: “Arnold Weber.”

Switch the letters around a little bit and you realize the Bernard Lowe is an anagram of Arnold Weber. The host’s new name isn’t that random at all, because you know someone who is as much of a control freak as Robert Ford wouldn’t let anything be random.