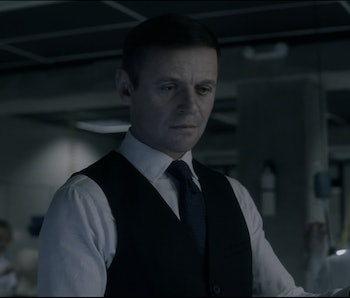 The moment that Bernard Lowe (Jeffrey Wright) waltzed into Sector 17, the section of the park that remains off the grid for everyone except VIPs, and discovered Robert Ford’s little robotic family living their false English countryside idyll, everything we thought we knew about the phantom known as Arnold was thrown out the window. The Arnold whom we thought was introduced in “The Stray” turns out to be a lie.

The vest-wearing gentleman standing next to a fresh-faced Ford in a photo on his desk is actually his father, who turns up again in robotic form in the cabin and attempts to choke Bernard for trespassing before Ford stops him. Since we first heard about Arnold, who allegedly died a few years after the park opened, he has remained an intentional cipher. Considering Ford’s already duplicitous nature, and the fact that the show is hitting the home stretch, it’s obvious that Arnold is most likely just a construct or a reflection of Ford himself just like everything else Anthony Hopkins’s character built in Westworld. Lets take a look how, shall we?

It’s no coincidence we get our first mention of Arnold in the same episode that we hear about Wyatt, the newly constructed villain meant to give lonesome cowboy Teddy a motivating backstory. “Perhaps it is time you had a worthy story of origin,” Ford tells the docile Teddy in that episode. “A fiction which, like all great stories, is rooted in truth.”

It seems Wyatt is conjured out of Ford’s mind just like Arnold, who we first hear about when Elsie confronts Bernard when the violent, grudge-holding host Walter mutters, “I need more milk, Arnold” post-murder spree. “Who’s Arnold?” Elsie wonders. This causes Bernard to confront Ford about it in his office, and we get the whole supposed backstory laid out for us in a possibly lie-filled montage, including Ford’s lie about the photo.

”For three years, we lived here in the park, refining the hosts before a single guest set foot inside. Myself, a team of engineers, and my partner,” Ford tells Bernard, before handing him the picture frame from his desk. “When the legend becomes fact, you print the legend. My business partners were more than happy to scrub him from the records, and I suppose I didn’t discourage them. His name was Arnold.”

The theory gets a little hazy when the Man in Black gets involved (though, honestly, when doesn’t a Westworld theory get hazy when Ed Harris’s gruff gunslinger moseys into the picture?). He calls out Arnold by name to Armistice at her camp, telling her, “[Arnold] created a world where you could do anything you want, except one thing you can’t: die,” and continues, “But then Arnold went and broke his own rule. He died right here in the park.”

The thing is, we haven’t gotten clear evidence that the Man in Black has ever seen Arnold, and if he has, perhaps he just saw the photo that Ford showed Bernard. In fact, nobody has actually seen Arnold alive besides Ford, who, despite his massive intellect, is nothing if not an unreliable source. Arnold’s “death” could just be figurative.

This is especially true when Ford invites Theresa Cullen (who doesn’t know Arnold) to the remote agave plantation to mull over his equally massive and still undisclosed new narrative, which seems to be literally steamrolling through sections of the park. But instead of answers, the confrontation turns into a kind of one-sided confession.

“In the beginning, I imagined things would be perfectly balanced. Even had a bet with my partner, Arnold, to that effect,” he tells her. “I lost the bet. Arnold always held a somewhat dim view of people. He preferred the hosts.”

Later, he seems to divulge too much to her, even while remaining typically abstract. “[Arnold] begged me to not let you people in. The moneymen. Delos. But I told him we’d be fine, that you didn’t understand what you were paying for. It’s not a business venture, not a theme park, but an entire world,” he says. “In here, we were gods.” When Theresa challenges him by pointing out that it didn’t work out too well for Arnold, Ford rebuts: “He went mad. I haven’t, as you well know.”

But everything he’s said about Arnold makes more sense when applied to Ford himself. He prefers the hosts to humans, he has an almost physical reaction whenever Delos is mentioned, and he also prides himself on being the god of the park who happens to seem like he’s becoming increasingly mad.

The specific evidence that Arnold may just be a construct, and that everything Ford says about him may actually be about himself, literally comes from Ford’s mouth in a bit of linguistic gymnastics during his interrogation of Dolores. (The emphasis is ours.)

“Do you remember the man I used to be?” he asks her. When she says no, he continues: “But I’m sure you remember him. Arnold. The person who created you.” And yet later, when he orders an analysis on her, she admits her last contact with Arnold was on the day he died: 34 years, 42 days, and 7 hours ago.

To make matters weirder, whenever Dolores has “spoken” to Arnold as her conscience, it’s in Bernard’s voice. This might give credence to the theory that Bernard is a secret host under Ford’s maniacal bidding, and an extension of his “dead” Arnold persona.

When Bernard makes it to the cabin, he clearly thinks the man there is the Arnold from the photo, and yet Ford reveals that everyone there is a first generation host meant to resemble Ford’s family (even his cat-killing greyhound) built by Arnold as a gift.

It obviously makes Bernard deeply uncomfortable, because he realizes his boss, whom he trusted, blatantly lied to him and has been housing unlicensed hosts behind his back. But even in his explanation, Ford can’t help but quote Arnold in a statement that says more about himself. “Great artists always hid themselves in their work,” he says. Maybe Ford is hidden in his, well beyond repair.