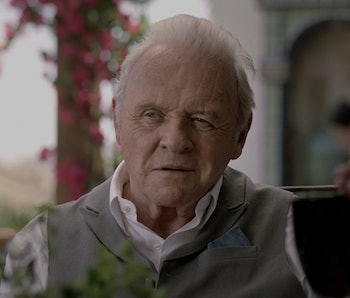 Nothing is easy to fully understand or pin down on HBO’s Westworld, and appropriately, the most confounding aspect of the show thus far has been the Dr. Frankenstein character pulling all the robotic strings: Anthony Hopkins’s Dr. Robert Ford, Westworld’s mysterious creative director. Whenever he’s popped up during the show’s first four episodes, it has led to an important — though still unclear — revelation. It’s partly due to the character’s mysterious agenda, but there is also something in Hopkins’s performance that makes his interpretation uniquely ineffable. While it’s hard to describe that quality, Hopkins has produced it before, namely in his most iconic role: Hannibal Lecter.

We first meet Ford in “The Original” (the pilot), as he talks in ambiguous terms about an unknown character to a decommissioned robot named Old Bill. “Shall we drink to the lady with the white shoes?” he asks the obsolete old thing sitting before him. “Perhaps we better drink to a deep and dreamless slumber.” It’s difficult to figure out exactly what’s going on here, and this is an important introductory scene. Who is the lady? Why does Bill shut down when Ford recites the “slumber” line from A Study in Scarlet, and what does that all mean?

Such disorienting, Lit-heavy dialogue delivered with a sense of authority could be immediately off-putting, if it weren’t for Hopkins’s effortless confidence as Ford. Similar dense exchanges from the character’s sporadic but important appearances throughout the first four episodes follow from there.

He ponders human obsolescence in “The Original”:

We’ve managed to slip evolution’s leash now, haven’t we? We can cure any disease, keep even the weakest of us alive and one fine day perhaps we shall even resurrect the dead, call forth Lazarus from his cave. Do you know what that means? That means we are done, that this is as good as we’re going to get.

He basically scolds his colleague and mentee mentioning Occam’s Razor in “Chestnut” by using it again him:

The problem, Bernard, is that what you and I do is so complicated. We practice witchcraft. We speak the right words. Then we create life itself out of chaos. William of Occam was a 13th century monk. He can’t help us now, Bernard. He would have us burned at the stake.

He also reflects on his own existence by quoting Shakespeare to one of his hosts in “The Stray”:

Cowards die many times before their deaths. The valiant never taste of death but once. Of course, Shakespeare never met a man quite like you, Teddy. You’ve died at least a thousand times, and yet it doesn’t dull your courage.

The character obviously has to carry a hefty amount of gravitas, while also remain hard-to-read — he’s the one with the master plan. As a central figure in the park, Ford is someone we want to know about, especially considering how his new narrative plan seems to be what’s causing the park’s hosts to become self-aware. Westworld does an incredible job of never breaking the cardinal sin of dumping exposition at the audience through dialogue. This is nowhere as prominent as it is when Ford is on-screen. You almost have to lean into the TV to hang on every word, and his probing tête-à-têtes simultaneously act to confuse, terrify, and inform, just like Hopkins’s first appearance as Lecter in Jonathan Demme’s The Silence of the Lambs.

Lecter’s discussions, while also taking place near creepily pervasive glass walls like Ford’s, are a bit more institutional. The former forensic psychiatrist is, after all, locked up for life for being a cannibalistic serial killer. But that doesn’t mean he can’t share Ford-esque transcendental-yet-complex witticisms with FBI trainee Clarice Starling (Jodie Foster) who is hoping to catch a serial killer nicknamed Buffalo Bill with possible ties to Lecter.

Whereas Ford reflects to his employees and robots on creation and death on a scale dictated by artificial intelligence, Lecter’s own existential riddles of mortality are decidedly more human. But they’re similarly impenetrable.

When Starling inquires late in the film how to find the killer, the exchange could be right out of a Westworld script. “Simplicity. Read Marcus Aurelius. Of each particular thing, ask: What is it, in itself, what is its nature?” Lecter elaborately responds. “What does he do, this man you seek?” he says, eventually leading to the non-answer: “We begin by coveting what we see every day.”

Lecter’s ability to steer her out of her own confusion and toward some kind of truth is the most explicit trait shared between he and Ford. Yet when Lecter pesters Clarice in the film’s quasi-titular scene, asking her You still wake up sometimes, don’t you? Wake up in the dark, with the lambs screaming?” he somehow illustrates a point about her fractured childhood and sets her on the path to finding the killer. When Ford did the same, like with his knotty conversation about his new narrative at the agave plantation with Theresa Cullen in “Dissonance Theory.”

The difference here and in every other interaction is that Ford’s God complex is about himself, Lecter’s is about someone he wishes to be.