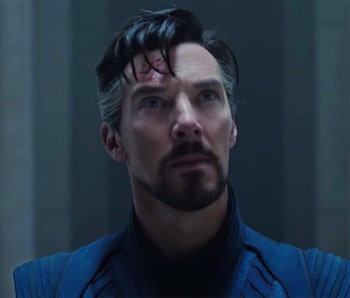 Doctor Strange flies into theaters in just a few days, but it looks like Marvel couldn’t wait to reveal some of the movie’s biggest surprises. In a newly released TV spot for Doctor Strange in the Multiverse of Madness, the studio reveals two incredible cameos — and a third that’s also pretty cool.

This should go without saying, but there are spoilers below for Doctor Strange 2.

The commercial begins with a familiar scene: Doctor Strange being arrested by Marvel’s Illuminati. Then, as the unmistakable voice of Patrick Stewart narrates, the trailer cuts between various scenes, in the process showing a few exciting characters.

First, there’s Captain Carter (Peggy with the Super Soldier Serum as seen in What If...?), clearly identified by her shield and also sporting some sort of jetpack on her back.

We also see what appears to be a super-powered Monica Rambeau (despite earlier theories that the glowing figure was actually an Iron Man variant).

But the best is saved for last. The camera pans over to reveal a man’s wrinkled hand. More important, though, is the shiny yellow surface it’s resting on.

Look familiar? We’re pretty sure that’s Professor X’s floating hoverchair from X-Men: The Animated Series (and also some of the comics).

In just 15 seconds, Marvel reveals how Doctor Strange 2 will unite the Marvel Cinematic Universe with two other realities: What If and the X-Men.

The What If connections aren’t a huge surprise. Earlier trailers showed an evil-looking Doctor Strange you probably recognized from the same animated series. Still, the arrival of Captain Carter opens up the possibility that anyone else could follow suit, from hard-partying Thor to post-apocalypse Black Widow.

Professor X’s appearance is a lot more shocking. While it’s been an open secret for a while, this is the best confirmation so far that the X-Men film actor is joining the MCU (at least for one movie). However, the fact that this appears to be a version of the character inspired by the ‘90s cartoon — not the more-recent movies — suggests it might not be that simple.

Marvel could be creating a link between the MCU and the ‘90s cartoon (coincidentally set to return on Disney+ next year). We’ll just have to wait and find out. Thankfully, it won’t be much longer before we get some answers.

Doctor Strange in the Multiverse of Madness premieres May 4.