The Illuminati in 'Doctor Strange 2' could solve Marvel's Avengers problem

“The Illuminati will see you now.” 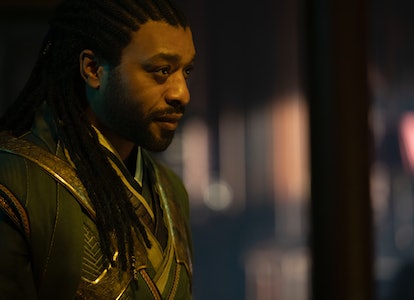 After months of hinting at the group’s possible inclusion in the film, Marvel Studios confirmed this week that Doctor Strange in the Multiverse of Madness will introduce the Illuminati. At least, a version of the comic book group will appear in the film, with Baron Mordo (Chiwetel Ejiofor) telling a handcuffed Stephen Strange (Benedict Cumberbatch) in one of the film’s recent TV spots, “The Illuminati will see you now.”

It has yet to be confirmed who the members of the Illuminati are in Multiverse of Madness, or what the powerful group’s role actually is. The characters expected to appear during the movie’s Illuminati sequence are Professor X (Patrick Stewart), Baron Mordo, Captain Carter (Hayley Atwell), and a mysterious, glowing superhero that could be a version of Maria Rambeau (Lashana Lynch), who became Captain Marvel in her universe.

There are, of course, other characters rumored to be a part of the Illuminati, including Mister Fantastic and Balder the Brave. But what role will the Illuminati actually play in the upcoming Doctor Strange sequel?

Introducing the Illuminati — In the comics, the Illuminati is a powerful group of superhumans who come together to help protect the Earth from various threats. It’s initially Tony Stark who forms the group, but the team’s original members also included Mister Fantastic, Doctor Strange, Professor X, Namor, and Black Bolt.

The Illuminati appears to serve a similar purpose in Multiverse of Madness — namely, to secretly protect the Earth. Based on the footage that’s been released from the film, it looks like Patrick Stewart’s Professor X may be the group’s leader, and that Benedict Cumberbatch’s Doctor Strange will be unlucky enough to catch the Illuminati’s attention.

As a matter of fact, it’s looking increasingly likely that the Illuminati will already have a history with Stephen Strange by the time Cumberbatch’s sorcerer meets the group. In one of the recent trailers for Multiverse of Madness, Stewart’s Professor X can be heard saying, “We will see what kind of Doctor Strange you are.”

That implies the Illuminati have had run-ins with other variants of Stephen Strange, which may be why the group decides to apprehend the Marvel Cinematic Universe’s prime version of him when he (presumably) crosses over into their universe.

The Illuminati in the MCU — Very little is known about the Illuminati’s role in Multiverse of Madness. Several leaks and rumors have suggested the group’s presence may be more limited than fans think, and that every member of the Illuminati may even meet their end at the hands of Wanda Maximoff (Elizabeth Olsen). If that turns out to be true, then what’s the point of introducing the Illuminati?

As is usually the case with Marvel, there are a few possible answers. The first is that Marvel is getting the chance to establish that characters like Professor X do exist in the MCU — just not in the universe’s prime timeline. That means the studio may have an easier time bringing characters like the X-Men and the Fantastic Four into the fold in future MCU movies or TV shows.

Beyond that, Marvel is also on the verge of introducing powerful multiversal villains like Kang the Conqueror (Jonathan Majors) and Gorr the God Butcher (Christian Bale), both of whom are capable of wreaking havoc throughout every timeline in the multiverse. By introducing the Illuminati, Marvel is therefore establishing that there are other Avengers-esque groups in the MCU who can step up to fight someone like Kang when the time comes.

Whether that means a version of the Illuminati will pop up again after Multiverse of Madness is hard to say, but the group’s inclusion in the Doctor Strange sequel certainly opens the door.

The Inverse Analysis — Trying to predict Marvel’s plans for its characters is always a bit foolhardy, and that remains the case here.

But regardless of whether the Illuminati’s presence in the MCU ever extends past Multiverse of Madness, it’s worth noting that the group’s upcoming debut isn’t important just because it means fans are going to see Captain Carter and Professor X again. The Illuminati is a powerful superhuman team, and their introduction represents yet another shift in the MCU’s established hierarchy.