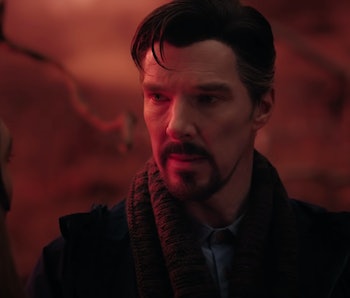 Marvel is going all-in on Doctor Strange in the Multiverse of Madness. The upcoming MCU film is going to follow through on the promises of titles like Loki and Spider-Man: No Way Home by diving headfirst into Marvel’s growing on-screen multiverse, which means Multiverse of Madness will feature everything from animated dimensions of reality to several truly weird cosmic entities.

The film is also going to introduce viewers to multiple versions of Benedict Cumberbatch’s Doctor Stephen Strange. Previous trailers for Multiverse of Madness have already shown the film’s Sinister and Defender Strange variants, but it turns out they won’t be the only alternate reality versions of Strange fans will meet this May.

A Clean-Shaven Strange — Marvel recently unveiled several Funko Pop figures that will be released alongside Doctor Strange in the Multiverse of Madness this summer. Included in the lineup are several of the film’s known players, like Defender Strange, Scarlet Witch (Elizabeth Olsen), and Baron Mordo (Chiwetel Ejiofor).

The Funko lineup also includes a character known simply as “Supreme Strange,” who’s shown to be both clean-shaven and dressed in striking blue and silver robes. In other words, the toy is for a variant of Strange we’ve yet to see in action in the Multiverse of Madness trailers.

That said, some Marvel fans believe Supreme Strange may actually be the version of the MCU hero we briefly see a statue of in the most recent Multiverse of Madness trailer, one who appears to exist in a much more controlled reality than many of the film’s other characters.

Break the Rules, Become a Hero — Over the past few months, Marvel fans have learned about four versions of Doctor Strange that will appear in Multiverse of Madness: The prime reality Strange, Sinister Strange, Defender Strange, and now Supreme Strange. Predictably, the film’s trailers haven’t told us much about the roles that Strange’s various variants will play, or how much screen time each character will get.

However, if Supreme Strange is indeed the version of the sorcerer we see a statue of in the second Multiverse of Madness trailer, then we can make a few guesses as to how he’ll be presented in the film. It seems safe to say he’ll be a variant of Strange who has somehow managed to avoid or conquer the chaos that’s wreaked havoc throughout several of the other universes.

There’s no telling what that means about his role in the story, or what wisdom he might be able to impart on his prime reality self, who’s shown looking up at the statue. Whether he’s the last of Multiverse of Madness’ Strange variants also remains unclear.

The Inverse Analysis — Throughout the first two trailers for Doctor Strange in the Multiverse of Madness, fans have been shown scenes of both Stephen Strange and Wanda Maximoff crossing paths with alternate versions of themselves. In a film where the fate of the entire multiverse seems to be at stake, bringing Strange and Wanda face-to-face with variants who have faced similar conflicts seems like a compelling storytelling twist.

Assuming the dark version of Strange we see in the first Multiverse of Madness trailer is a variant of the sorcerer who failed to protect his universe, then it’s possible Supreme Strange could be one who succeeded. If that’s the case, the latter variant may end up playing an important role in whatever journey Stephen Strange goes on in Multiverse of Madness.