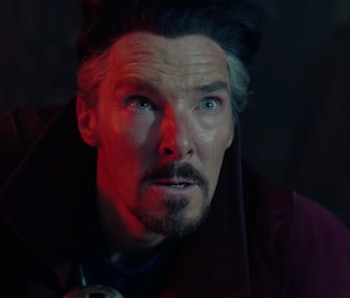 The latest trailer for Doctor Strange in the Multiverse of Madness is overflowing with weird moments and mesmerizing visuals.

From showing Stephen Strange (Benedict Cumberbatch) and America Chavez (Xochitl Gomez) falling into an animated dimension to putting two versions of Wanda Maximoff (Elizabeth Olsen) in the same room, the trailer does a lot to sell it as being Marvel’s weirdest and most visually ambitious film yet. That’s especially true in the trailer’s opening moments, which deliver a handful of trippy images, including a shot of a demonic entity screaming in the face of a bound Chavez.

The creature makes an immediate impression, and while its identity hasn’t been confirmed by Marvel, some comic book readers think they’ve already figured out who it is.

The Crimson Bands of Cyttorak — A number of MCU fans believe the strange entity seen early on in the Multiverse of Madness trailer is none other than Cyttorak.

In the comics, Cyttorak is an entity considered both a god and a demon, and who was long ago banished to a dimension known as the Crimson Cosmos. He’s most notable for being the creature whose powers turn Cain Marko, Charles Xavier’s step-brother, into the Juggernaut.

However, Cyttorak is often depicted in the comics as being a massive red figure. He doesn’t look anything like the creature in Multiverse of Madness, so why do fans think the monster in the film’s trailer is Cyttorak?

The answer calls back to a minor but important moment during Doctor Strange’s fight with Thanos on Titan in 2018’s Avengers: Infinity War.

Strange casts a spell that allows him to wrap several powerful crimson bands around Thanos’ Infinity Gauntlet, which he then uses to try and pull the gauntlet off the Mad Titan’s hand. The spell he uses is known as the Crimson Bands of Cyttorak, and it’s manifested by channeling some of Cyttorak’s power from the Crimson Cosmos.

With that in mind, it’s worth noting that the strips of material that make up the creature at the start of the Multiverse of Madness trailer look a whole lot like the Crimson Bands of Cyttorak do in Infinity War. So fans believe the creature may very well be the Lord of Oblivion himself.

The Nightmare Begins — Shortly after Cyttorak’s appearance in the Multiverse of Madness trailer, we’re shown a brief shot of the film’s Defender Strange variant falling through one of America Chavez’s star portals. That moment is immediately followed by a shot of Benedict Cumberbatch’s Stephen Strange jolting awake in his bed.

While it’s possible the two events are unrelated, they’re blended together by one continuous camera movement, which suggests they could be connected in the film. As New Rockstars recently pointed out, the Strange who wakes up in his bed also doesn’t have the same hand injuries that led to him becoming a master of the mystic arts in the MCU’s prime reality.

Is it possible that Defender Strange falling into a star portal in Multiverse of Madness is what leads us into a reality where Stephen Strange never became a sorcerer?

The Inverse Analysis — Until the film itself is actually released, there’s no way of knowing whether the creature shown in the Multiverse of Madness trailer actually is Cyttorak, or that the Strange who wakes up in his bed isn’t the same one viewers have come to know and love. The absence of scars on Strange’s hands could be a simple continuity mistake, or something Marvel plans on fixing during the final stages of post-production. But if nothing else, the latest trailer has teased plenty of exciting possibilities.