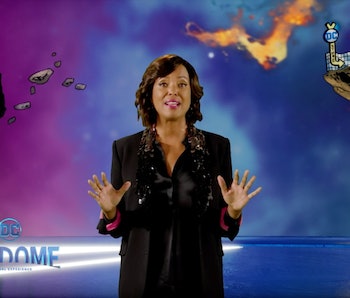 In a time when so many events have moved online, it can be difficult to create an environment that caters to fans all over the world while still feeling exclusive. Where events like San Diego Comic-Con were reduced to a handful of recorded Zoom calls that lacked the magic of the in-person event, DC FanDome felt different. It felt exciting. The reasons for the event's success are numerous, but it all comes down to presentation.

The magic of conventions lies in the economy of information. When you're in an exclusive area like Hall H, you are one of the chosen few who gets to see what is revealed there, while the rest of the fans clamor to find out what happened. When Comic-Con went virtual with its Comic-Con@Home event, all of that exclusivity was gone.

There was little inventive for creators to reveal something new. How exciting is a trailer reveal when it's watched a week later? Comic-Con was made up of a number of YouTube videos, and these videos would start at the beginning when they were clicked. This means no fan missed out on any content, but it also meant nobody was truly watching at the same time, limiting the potential for live-tweeting and other conversations.

DC FanDome solved all these problems by not trying to replicate the convention experience. Instead, it leaned into its virtual-only restrictions and created an entirely digital "Hall of Heroes" decked out with Jim Lee art. Where Comic-Con tried to focus on the content, DC FanDome embraced its global audience by including a significant number of international presenters and fans.

DC FanDome was also much more accessible. While Comic-Con did not even include English subtitles for the deaf and hard of hearing, DC FanDome subtitled its entire programming block in English, French, Spanish, Italian, Korean, Japanese, German, Portuguese, and Chinese.

Besides the fact it looked good and was inclusive, there was one key element that made DC FanDome feel like a true convention: it was livestreamed. This meant if you weren't around for the Wonder Woman 1984 panel, you would have to wait for the encore presentation eight hours later. Every moment felt fleeting and exciting, and fans stuck at home could share in that excitement without worrying about spoiling others.

When huge reveals like the Snyder Cut trailer and The Batman trailer happened, there was the same hushed anticipation there would be in a crowded arena, even if someone was watching alone on a phone. It was truly the first time anyone had seen this content, and for once, the entire world could share in the moment together. That's the kind of magic that needs to be captured in conventions in future, whether digital or in-person.