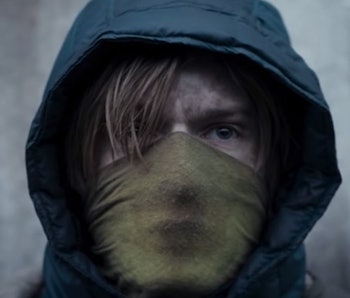 In the Season 2 premiere of Netflix time-travel drama Dark, Martha's diary reveals the date of the upcoming apocalypse: June 27, 2020. So it's only fitting that day would be the premiere date for the third and final season of Germany's answer to Stranger Things. The announcement also included a cryptic trailer for Dark Season 3, and there are some enticing clues in there about where the story might be headed after that bombshell Season 2 finale.

Spoilers ahead for Dark Season 2, along with speculation for Season 3.

In the final moments of Season 2, an alternate version of Martha approached Jonas and her own dead body. Alt-Martha told Jonas to come with her, not to another time, but to another world. The Season 3 trailer, embedded below teases some enticing new possibilities in store for this alternate world:

The biggest chunk of the trailer focuses on these three fellows, all probably the same man from different points of time, as they set fire to Adam's base. The trailer includes a close up of Michael's suicide letter from all the way back in Dark's very first episode. But who are these strange men? They seem to be the best bet for the new antagonist of Season 3, which means they are probably from the alternate world, but that's where any informed speculation ends.

Our best guess: they are the collective head of Sic Mundus in the alternate world, sent to the "normal" world to hunt down Adam and shut down all the time-travel and dimension-hopping our characters have gotten up to. This would mean imminent danger for all involved, possibly an even more urgent threat than the literal apocalypse triggered at the end of Season 2.

In Season 1 of Dark, Ulrich smashes a young Helge over the head to save the lives of Erik and Yasin. In the trailer, however, a woman does this. Could this woman be the alternate-world equivalent to Ulrich? It's possible this is one of the single-scene characters in the show, psychiatric nurse Helene Wolf, but with only this split-second shot to go by, it's difficult to tell.

If this is an alternate Ulrich, it implies the possibility of an alternate Helge, too. Could the aforementioned cleft-lip man be another version of Helge, sent across universes to right the wrongs?

There's an ongoing motif through the Dark Season 3 trailer of time running backward, in a very Nolan-esque way. Jonas runs backward through the woods and a tear appears to roll up Martha's cheek as she stands in front of a portrait of Adam and Eve, a reference to the elder, disfigured Jonas being referred to as Adam, and the elder Martha as Eve.

Could this become a mechanic in the new season? Or is it just a trailer gimmick used to demonstrate the way events need to be undone in the "last cycle"? Either way, our heroes have to find a way to avoid the apocalypse, or at least give us a cracking story while the world ends.