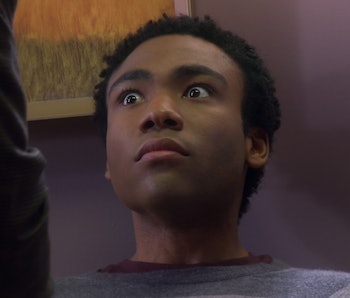 “Without question, absolutely,” Burton says when asked if he’d participate in a Community movie. “I love Donald Glover. He's a genius. Any opportunity to interact with him. I had a blast on the two episodes that I did. The answer is an unequivocal yes.”

Glover left Community after Season 5 Episode 4 (the series ran for six seasons) by sailing off on an adventure with LeVar Burton (playing himself in a reference to an earlier episode). Recent speculation around the plot of a Community movie revolved around the idea that Troy Barnes (Glover) and Burton may need to be rescued by the rest of the study group.

“I think there's still some thought that we remain captured by pirates and are trolling the Gulf of Mexico,” Burton says, “but I'm sure that Donald would find a way to incorporate that into the narrative.”

#6seasonsandmovie — The idea that Community could culminate in a film dates back to a meta joke in the show’s second season, but it became a rallying cry among fans as the series faced multiple cancellations on its way to that promised sixth season. For years, fans assumed that was all we would get, but in 2020, everything changed.

Community saw a resurgence in 2020 after the beloved cult sitcom landed on Netflix, culminating in a Zoom reunion for the original cast (except Chevy Chase). During the reunion, Donald Glover publicly expressed interest in getting the cast back together for a movie.

Glover, whose incredible success as a musician and actor in the years since led fans to assume he’d never return to Community, reflected on the show’s legacy before going on to pitch his idea for the plot:

“Watching it now, I’m like, ‘Oh this show is really punk. It’s really subversive and kind of punk, and at the time, it didn’t feel like… our show was the cool thing. Like I had lunch with friends on Parks and Rec, and people were like, ‘Oh that’s the cool show.’”

“Am I writing the movie on the fly or something? He’s [Troy] probably lost. I feel like Abed’s got to find him. I like those movies.”

The Inverse Analysis — With Burton, Glover, and the rest of the cast ready to reunite for a movie, the last obstacle may be Community creator Dan Harmon, who’s currently a little busy making 100 episodes of Rick and Morty. But if that’s ever finished — or Harmon finds some spare time to write a movie script — it looks like we might actually get the film fans have been waiting on since 2011.