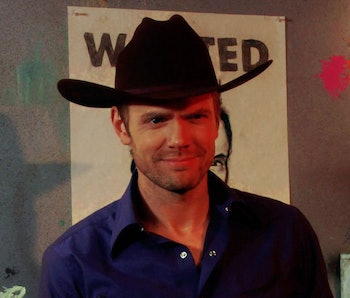 It started with a random joke in a fake flashback in an episode of Community Season 2. But like so many aspects of the beloved sitcom created by Dan Harmon, “Six seasons and a movie” went on to become much more.

When the show was canceled, fans rallied around those words first spoken by Abed Nadir (Danny Pudi). Well, we got our six seasons, and now it looks like we’re getting a Community movie too. But there’s a catch: You’ll probably have to watch it on Peacock.

Let’s run through exactly how we got here.

At 8 p.m. Eastern on Thursday, the official Twitter account for Community shared a video of that Season 2 scene:

Then, on Friday morning, it tweeted this:

In response, Joel McHale (who plays Jeff Winger on the show) tweeted this:

Ken Jeong (who plays Ben Chang) also tweeted the same image. But that’s not where it stopped. You may have noticed that among the accounts McHale tagged with his tweet is the official one for Peacock. In response, the streaming platform shared this:

And in case you need further confirmation that the Community movie is happening on Peacock, here’s this from Jeong:

So yes, a Community movie is confirmed, but it looks like you’ll have to watch it on Peacock. That doesn’t come as a huge surprise, since there’s no real market anymore for comedies like this one at the box office, but it is slightly annoying for anyone who already used up their free Peacock trial and doesn’t feel like paying for yet another streaming service.

Who’s in the cast of the Community movie?

Nothing is confirmed yet, but it seems clear that McHale and Jeong are committed. Based on McHale’s tweet, we also assume Alison Brie (Annie), Danny Pudi (Abed), Yvette Nicole Brown (Shirley), Donald Glover (Troy), and Gillian Jacobs (Britta) are all back. That’s particularly surprising for Brown and Glover, who both left the show before it officially ended to pursue other opportunities.

Update: The official announcement from Peacock doesn’t mention the return of Glover or Brown, so you probably shouldn’t get too excited for their characters to appear in this movie.

Jim Rash (Dean Craig Pelton) is missing from this list, but that’s likely because he isn’t on Twitter. The actor has long been a champion of the series and participated in a Zoom reunion in 2020 where the idea for a reunion movie was first seriously discussed. Chevy Chase (Pierce Hawthorne) is also missing, but he likely won’t be involved due to the ill will between him and the rest of the cast — not to mention his public feuding with Dan Harmon.

For what it’s worth, Levar Burton also told Inverse last year that he’d be interested in reprising his role as himself in a movie, which makes sense since the last time we saw Troy he was setting off on a nautical adventure with Burton. But it’s unclear whether Burton or anyone else from the show’s sprawling cast will return.

That said, if Magnitude doesn’t say “POP POP!” at least once in the Community movie, then what was any of this even for?

The Community movie does not have a release date.