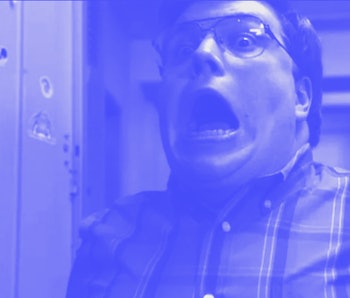 The complete run of Community — all six seasons (but no movie) — is now available on Netflix, spurring many diehard Greendale Human Beings to start a rewatch. Even if you've seen it before, the show's overarching plots and callbacks make it well worth a second go-round, and one fan may have discovered the clue to a case introduced all the way back in Community Season 2.

Reddit user IntelligentDog4 claims to know the true identity of the Ass Crack Bandit, the mysterious figure who terrorizes students by dropping coins into their... coin slots. Before we dive into the theory, it's worth revisiting the facts of the case.

The Ass Crack Bandit was first mentioned in the Community Season 2 episode "Intro to Political Science." Annie promises to eradicate the ACB in her campaign promises, but the topic never comes up again, and Annie drops out of the election. Three years later, in the Season 5 episode "Basic Intergluteal Numismatics," The Bandit strikes again, on poor Garrett.

Annie jumps into action, and along with Jeff discovers two things about the Ass Crack Bandit. First, they have access to the teacher's lounge. Second, they love the Dave Matthews Band. While this lead seems to run cold as all the teachers who enjoy Dave (as his fans call him) have strict alibis, Jeff and Annie catch the Bandit leaving another scene of the crime and give chase, only to be interrupted by Shirley informing the pair of Pierce's death. The case is then forgotten and remains unsolved to this day.

This new theory suggests the Ass Crack Bandit is fellow study group member Britta Perry. The theory seems thin at first, after all, what motivation would Britta have to terrorize students like this?

It could be purely out of spite. Community Season 2 included a definite shift in the way Britta was treated, from "cool girl" to the one who "ruins everything." This new criminal behavior may be a way for her to get her revenge.

As for those two clues, Britta, like Jeff, grew up in the 90s and had "two ears connected to a heart," which apparently is all you need to be a fan of Dave Matthews. This leaves the issue of the teacher's lounge. The Season 5 episode surrounding the ACB also reintroduces the character of Professor Ian Duncan, who seems constantly enamored with Britta. Someone so infatuated with her wouldn't take much convincing to give her access to the teacher's lounge.

There's more evidence, too. In the final montage of the episode, she's shown writing a psychology paper, but she accidentally types "Ass Crack Britta" instead of "Ass Crack Bandit."

The final nail in the coffin? Two of the highest-profile "crackings" are Troy (Britta's ex) and Duncan (who's obsessed with her). Seems like an open-and-shut case, but until we get that much-awaited Community movie, there's no way to know for sure.