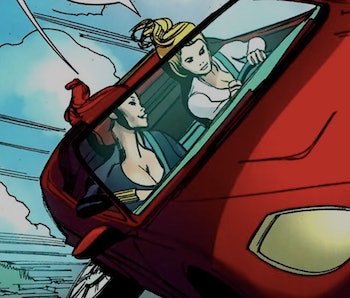 “Do you really want to punch your way out of this?” Natasha Romanoff may not want a life of violence, but that’s the life she leads as one of the most capable combatants in comic books and the Marvel Cinematic Universe — but she’s not the only super-spy who can kick ass.

Sharon Carter, Agent 13 has proven across decades of comic books (and more recently in The Falcon and the Winter Soldier) that she’s no slouch either when it comes to delivering fisticuffs and brutal roundhouse kicks. But there’s more to each character than relying on their physical prowess.

The two women have far more in common than not, but in the world of spy games, double-crosses, shifting allegiances, and mistaken identities are part of the trade. With all of that at stake, it’s just as easy to imagine Sharon Carter and Natasha Romanoff going at each other as teaming up.

We’re unlikely to ever see Natasha and Sharon face off in the MCU, given the former’s deceased status. But we can certainly imagine what that fight might have looked like, and Inversus battle is just the thing to make that battle all the easier to conceive.

Black Widow first appeared in Marvel Comics’ 1964 comic book Tales of Suspense #52, and later in the MCU in Iron Man 2. Though she originally began her storied comic book lore as an antagonist, she quickly emerged as one of the most proficient and popular heroes in Marvel Comics, teaming up with the Avengers, Spider-Man, Wolverine, Daredevil, and the Winter Soldier.

In the comics and MCU, the character has often found herself attempting to atone for the crimes committed as a Russian assassin. Although she’s come a long way in clearing the red in her ledger, she consistently finds new secrets from her past making their way into the present and threatening to undo the life of heroism she’s built for herself.

Black Widow’s powers include peak physical conditioning, later revealed to be part of experiments conducted on her as a child with Russia’s own form of the super-soldier serum. She’s a master martial artist, assassin, spy, weapons expert, and hacker. Though she often uses firearms, she also possesses Widow’s Gauntlets, which emit powerful electric shocks. She’s one of the best fighters in the Marvel Universe, having gone toe-to-toe with Captain America, the Winter Soldier, Hawkeye, Nick Fury, and Daredevil.

Sharon Carter first appeared in Marvel Comics’ 1966 comic book Tales of Suspense #75, and later in the MCU in Captain America: The Winter Soldier. Inspired by her aunt, Peggy Carter, Sharon became an Agent of SHIELD and was given the designation Agent 13. She is one of Captain America’s most frequently appearing allies, and the two have shared a lengthy romance.

In the MCU, Sharon Carter was originally tasked by S.H.I.E.L.D. to keep an eye on Steve Rogers, and she eventually became his ally during the superhero civil war. After the Blip, Sharon resurfaced in the criminal safe-haven Madripoor, as an illegal art dealer with a more cynical view on life.

Sharon Carter doesn’t possess any super powers but is excellent in hand-to-hand combat, and proficient in firearms and S.H.I.E.L.D. tech. She’s a formidable spy, intel gatherer, and has assisted Captain America in a pinch on numerous occasions.

Natasha Romanoff has come to Madripoor with the suspicion that the new Power Broker who has been causing so many headaches may in fact be Sharon Carter. But she doesn’t want to let Sharon in on her suspicions so she sets up a meeting at Sharon’s art gallery to assess the situation.

The two women sit in Sharon’s lounge, sharing a drink. They talk S.H.I.E.L.D., Cap, the state of American superheroics. Yet neither woman lets her guard down. They know each other too well. Black Widow mentions the Power Broker, and she notices the slight movement in Sharon’s eyes, towards the seat cushion. Natasha knows there’s a gun there. She knew it from the moment she entered the lounge.

“Something you want to tell me, Sharon?” Natasha says.

“If only it were that easy. I know what you think. But it’s not what it seems,” Sharon says.

Before Natasha can finish, Sharon pulls the gun from beneath the seat cushion and fires. Natasha sits calmly, pretending to sip her martini as she’s been doing for the past thirty minutes. Sharon’s empty gun clicks.

“I’m sorry, Sharon. I took the gun out of the equation three hours before you knew I’d arrived. And that dizziness you’re feeling? I drugged your alcohol stash an hour before that.”

Sharon sinks back into the sofa unconscious. Natasha isn’t entirely convinced she’s the Power Broker, but she is a lead, one that would be best in S.H.I.E.L.D.’S hands.

Natasha stands over Sharon and hopes she hasn’t lost one of the few friends she has left. After all, friends are a luxury in this line of work.

Yes, Natasha is one of the best fighters in the Marvel Universe, but she didn’t become a world-class spy just by throwing punches and firing guns. She’s a master at getting people to lower their guards, and if she can defuse a situation without expending physical force, especially if the target is someone she respects, she’ll find other means to get what she wants.

Sharon Carter is a great S.H.I.E.L.D. agent and she’s learned a lot from her time with Captain America, but she’s simply no match for the Black Widow, who perfected the spy game before Sharon was even born. If anything, Sharon Carter should just be thankful she got K.O.’d with a martini instead of the Widow’s sting.

THE FALCON AND THE WINTER SOLDIER IS STREAMING NOW ON DISNEY+.