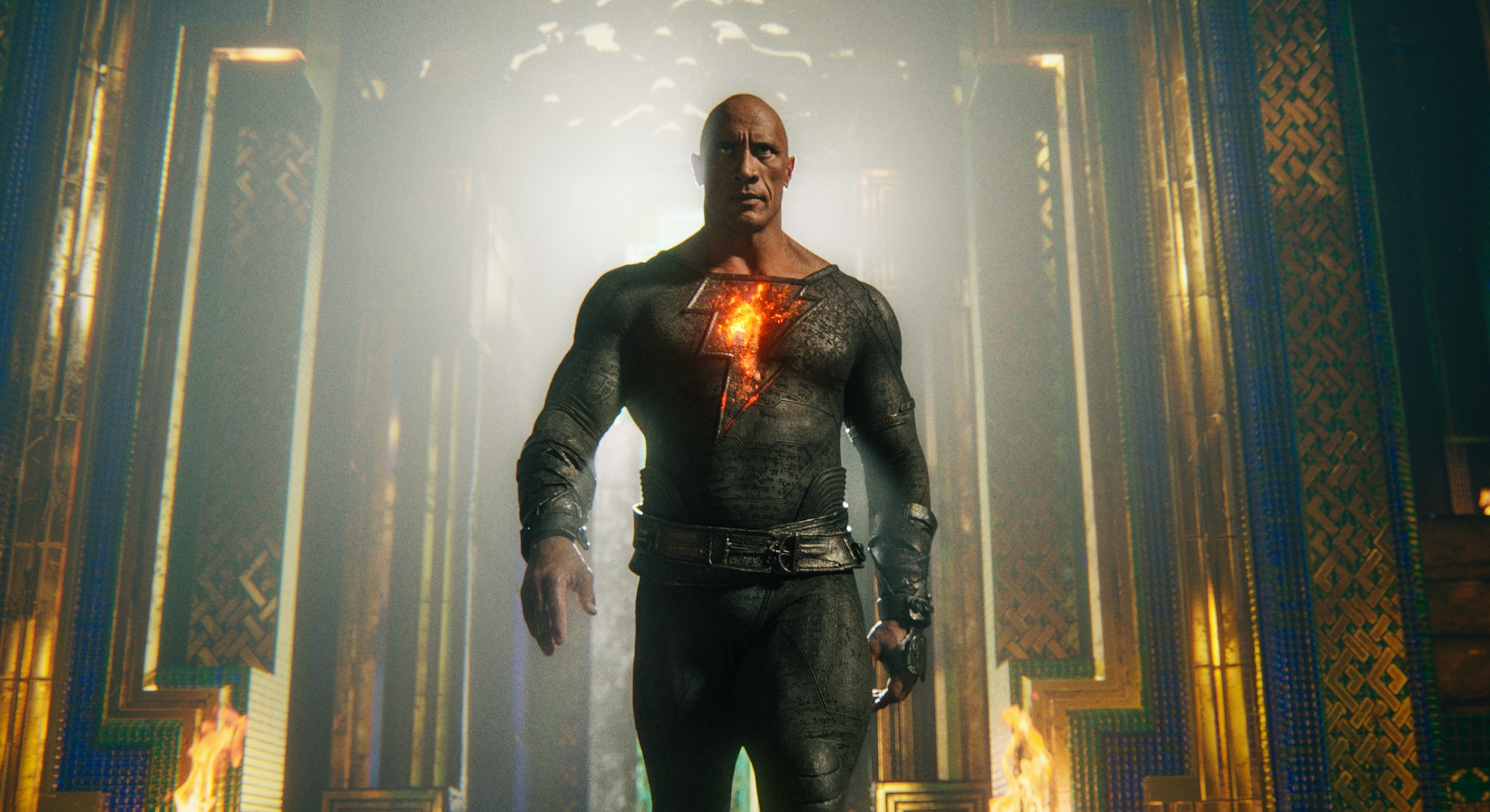 Between Ezra Miller, Batgirl, and a merger with Discovery, the DC Universe needs a hero. It has one: Dwayne Johnson.

As Black Adam, the imposing Johnson embodies an ethically ambiguous anti-hero who wields the powers of gods and the rage of an enslaved man. Johnson’s main character energy as the rogue in onyx is magnetic. But as Black Adam laboriously strives to leave the audience with a sense of meaning, it’s clear the movie’s writers were perhaps too uninterested, even too cowardly, to engage with its themes of freedom, power, and anti-imperialism. Ultimately, the needs of the DC Universe butt up against the overwhelming star power of Dwayne Johnson, and the film ends up losing many of the entertaining qualities it might have had.

Black Adam begins in 2600 B.C.E. in the fictional pseudo-Egypt nation of Kahndaq. A slave, Teth-Adam (Johnson), is blessed by wizards with great powers upon saying the magic word: “Shazam.” (More on that in a bit.)

But Teth-Adam’s rage against his enslavers turns the wizards against him, and so “Black Adam” slumbers in an unnatural sleep until he is awakened in the present by archaeologists-slash-revolutionaries who seek to free modern-day Kahndaq from occupying forces.

Black Adam is directed by Jaume Collet-Serra, whose filmography consists of tight thrillers, including the 2009 cult horror Orphan and 2016’s The Shallows, and so many vehicles for Liam Neeson. Since 2021’s Jungle Cruise, Collet-Serra has been on the Dwayne Johnson train, and Black Adam feels like just the next stop in their collaboration than a statement piece by either artist.

Some of Collet-Serra’s hallmark sensibilities shine through in Black Adam. His knack for music-as-character manifests in an elaborate if obvious needle drop of Rolling Stones’ “Paint It, Black” as Black Adam steamrolls an army. The scene is a gleeful introduction to what Black Adam can do, but the sequence ultimately lacks rhythm. But everything else is overcome by the sheer might of Johnson. His hero shots have all the elaborate details but none of the significance or lethal power that Black Adam is meant to represent.

In the comics, Black Adam is the archenemy of Shazam (formerly Captain Marvel). In 2019, the character got his own film, Shazam!, a Big-meets-Superman comedy released weeks before the monumental Avengers: Endgame. Ever the consummate businessman, Johnson has divorced himself from the Big Red Cheese. This is evidenced by the brief presence of Djimon Honsou, who played a pivotal role in 2019’s Shazam! (and in the upcoming Shazam! Fury of the Gods) but appears here as a glorified extra, credited only as “Wizard.” That’s despite the word “Shazam!” having an equally important function in Black Adam as it did in Shazam.

This comics-to-movies trivia is important to understand the philosophy driving Black Adam. It’s more of a Dwayne Johnson experience than a DC movie. Johnson doesn’t squeeze down his supersized stardom into the franchise as much as he forces it to accommodate him. As a consequence, Black Adam’s other characters — played by Aldis Hodge, Noah Centineo, Euphoria’s Quintessa Swindell, and Pierce Brosnan as superhero statesman “Doctor Fate” — seem to exist exclusively as supports rather than multidimensional characters.

Officially, the collected heroes are the Justice Society of America. (Much of Black Adam is modeled after Geoff Johns’ JSA comics.) But in execution, they become cookie-cutter, B-list Avengers. Even Hawkman (Hodge), whose traditional superhero morality stands in Black Adam’s way, seems beleaguered rather than invigorated.

In one of the film’s more interesting traits, the JSA becomes the quintessential extrajudicial superhero team, running around and destroying things in the name of Good. DC’s rival Marvel Cinematic Universe has grappled with these tropes before and, in comparison, did so with more art. Black Adam brings the subtext to the fore, anchoring Black Adam’s existence in the hypocrisy of superheroes. That’s a daring concept to come out of one of the biggest superhero brands in the world.

But as a story, Black Adam feels too disengaged to bring anything other than Johnsn’s stardom to the audience’s attention. Ask a producer, and they might balk at calling Black Adam political. Yet, on the screen, Black Adam puts out provocative ideas — the plight of an occupied people, imperialist America — and cloaks them in the superhero genre’s folds.

But like Marvel, Black Adam makes gestures at political and social ideas rather than actually saying something of consequence. All Black Adam proposes that power is all that matters, and humanity’s only hope against the bad guys with powers is... less bad guys with powers. What good is great power if there’s no great responsibility? This dichotomy propels Black Adam forward as much as it haunts it.

In theory, a movie like Black Adam is a miracle and a statement in and of itself. It’s a blockbuster relying on an endangered species — Hollywood stars — rather than name recognition of the franchise itself. But Black Adam isn’t bulletproof. In almost all regards, Black Adam is heavy-handed, and, in its humor at least, criminally unoriginal.

Dwayne Johnson isn’t necessarily an actor born to play a superhero, but he is a capable, plug-and-play franchise lead. A different script and a more challenging director might have taken Johnson to the artistic heights he set out as his ambition for Black Adam. Yet his innate invincibility instead feels much like a weakness.