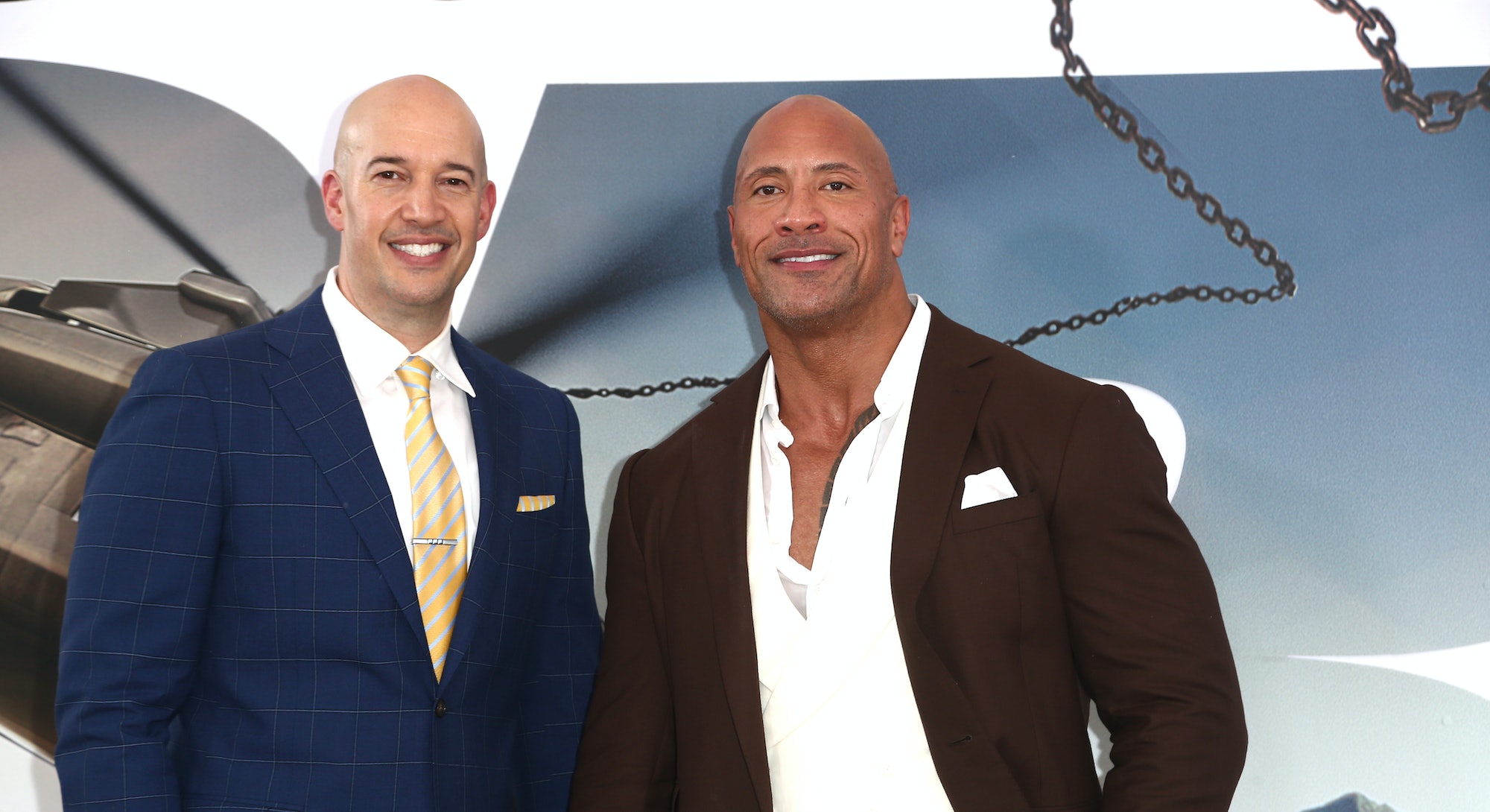 You learn a lot working with Dwayne Johnson, but you especially learn this: Don’t get in his way.

Last fall, the WWE performer-turned-Hollywood megastar tore the gate to his home off its hinges. Its offense? Failing to open after a power outage caused by storms the night before. Johnson had an appointment to keep on the set of his first Netflix film — the globe-trotting spy caper Red Notice — and the Rock wasn’t about to let a few inches of steel stand between him and work.

As Johnson arrived, he said nothing of his difficult morning. But once Hiram Garcia, Johnson’s producing partner and friend of 30 years, later learned of the dramatic escape, he didn’t bat an eye.

“I have a million stories like that,” Garcia tells Inverse. “It’s just another day.”

Garcia accepts that working with one of the world’s biggest movie stars — figuratively and literally, given that Johnson is 6’5” and weighs 260 pounds — means not always seeing beyond that billion-dollar grin.

“The craziest stuff in the world could be going on, and he shows up smiling, happy,” Garcia says. “You would never imagine the chaos in the background.”

Perseverance and the willpower to muscle through obstacles aren’t just part of Johnson’s morning routine. It’s the essence of his brand, his mana, and by extension his company, Seven Bucks Productions, which Garcia has presided over since 2017.

With DC’s Black Adam set for release next year, Red Notice won’t be the last in a long line of Johnson-led productions to reflect his aspirational approach, but the feel-good super-blockbuster is perhaps the most complete embodiment of Seven Bucks’ ethos to date.

A globally scaled action-comedy, Red Notice stars Ryan Reynolds and Gal Gadot as rival thieves — and Johnson as the federal agent aiming to arrest both throughout an elaborate cat-and-mouse game.

“It felt like the kind of movie [Hollywood was making] 15, 20 years ago,” says Garcia, “a big, fun vehicle for three giant movie stars.”

In a word, Seven Bucks wants to offer its audiences escapism.

“Dwayne and I have the belief that if someone’s coming to see our movies, we’re providing an escape from whatever’s going on,” Garcia says.

To the Seven Bucks crew, that means no downer endings, a sticking point they’ve had to fight for in the past. The original ending for Johnson’s monster-mash extravaganza Rampage (2018) would have staged the death of George, an affectionate CGI gorilla befriended by Johnson’s character.

“There is no way we are making a movie where this incredible gorilla dies,” Garcia remembers saying at the time. “It was a big fight with the studio.”

Eventually, all parties came to an agreement on the ending. Seven Bucks won out and Rampage followed suit, opening at no. 1 its opening weekend.

That kind of box-office dominance has defined most Seven Bucks projects, which vacillate between high-octane original thrillers like the Die Hard-esque Skyscraper and savvy adaptations of pre-existing intellectual properties, from syndicated summer-TV staple Baywatch (remade as an ironically brawny self-satire starring Johnson and fellow sun god Zac Efron) to family-friendly franchise launchpad Jumanji: Welcome to the Jungle (which turned the cursed board game into an electronic side-scroller and delights in swapping around its actors’ in-game avatars).

At the core of all Seven Bucks’ buzziest projects is Johnson, who established himself as one of the biggest movie stars in the business long before announcing he’d topline his own comic-book franchise. Powered by his high-wattage grin, easy charisma, and superhuman work ethic, Johnson became the highest-paid actor in the world last year, and he’s popular with essentially every audience quadrant the film industry seeks to attract.

“He’s a bit of a dying breed,” Garcia says, candidly. “We live in a world where IP dominates more than ever. There’s a very small group left of giant stars, but I think DJ is at the top of that list.”

Future films on Seven Bucks’ slate, from Black Adam to top-secret Christmas comedy Red One (described by Garcia as “Guardians of the Galaxy meets Miracle on 34th Street”), all run on Johnson power, with his business partners believing his old-school magnetism is worth more than any IP.

As such, the company places an equal premium on hatching original concepts for Johnson to star in. “It’s good for business to try new stories,” the producer says. “We love telling original stories, coming up with original takes on things, and creating new worlds.”

Red Notice, its newest picture, is one such take. The story started as a pitch that director Rawson Marshall Thurber brought to Johnson while filming Skyscraper. (The pair had previously collaborated on Central Intelligence, making Red Notice their third rodeo.)

“I remember DJ stood and threw his napkin against the wall, like, ‘I love it! I’m in!’” recalls Garcia. “It [sounded like] a movie that, after people watch it, they leave feeling better, having gotten a good ride. For us, it was irresistible.”

Named for the pocket change Johnson had after being cut from professional football, Seven Bucks has succeeded in part by following its instincts and remaining true to its roots. Red Notice, which cost Netflix upward of $200 million, is the streamer’s costliest venture to date, but Johnson and Garcia continue to have faith in the power of Hollywood blockbusters to attract and astound global audiences.

Johnson’s ex-wife and current business partner, Dany Garcia, co-founded the company with him in 2012, with brother Hiram coming aboard shortly thereafter. Their friendships stretched all the way back to childhood; Garcia recalls that he and Johnson would often play heated rounds of NHL ‘94 on Sega, the one sports arena in which the then-teenagers were competitive. (“He couldn't match my gaming skills. He was effective in the gym,” cracks Garcia. “We got along.”)

But when the pair spent a night at the movies (which was often), Garcia would see glimmers of Johnson’s confident, can-do attitude.

“I remember a big action sequence, and DJ [was] like, ‘Buuuull-shit,’” Garcia recalls. “He wasn’t impressed. “I’m like, How are you not impressed? But it makes sense now. He knew he was going to kick ass in an even bigger way. We just didn’t realize it.”

Garcia got his first job in Hollywood as Johnson’s assistant, back when he was filming The Scorpion King in 2002. The minute I got to set, it clicked,” recalls Garcia. “I wanted to be a producer. But I had no idea how to do it.”

Over the next decade, as Johnson steadily rose to stardom, Garcia studied the industry and enrolled in screenwriting classes. Finally, in 2012, he joined Johnson and his sister to establish Seven Bucks. “It's a hard business, so the more you can do with people you're close with, the better,” he says.

Knowing his collaborators so intimately, it’s unsurprising that Seven Bucks is a united front when it comes to making decisive choices. In the wake of a tragedy on the set of Rust that left its cinematographer dead and injured its director, Johnson recently announced he’d ban real firearms from Seven Bucks’ sets.

“I love that he’s made that public,” Garcia tells Inverse. “We’ve mandated [our films] to use rubber guns because nothing is more important than the safety of the crew. Hopefully, the rest of the industry will follow. It’s a very easy thing to do in post. We’re fortunate to be in a time when [visual] effects are so good that I think no one would even notice the difference.”

Red Notice required Seven Bucks to fire on all cylinders, with Johnson one of three marquee names central to Netflix’s strategy for the film. The poster, which merely depicts the actor standing alongside Gadot and Reynolds in a dapper suit, says it all. Rather than a shared universe, it’s the attraction of the charismatic star formerly known as “The Rock” that will bring in audiences — though this time around, Johnson’s selling subscriptions rather than tickets.

“The beauty of Netflix is that you aren’t beholden to traditional studio tropes,” says Garcia. “When you’re making a studio movie, there [are] hoops you need to hop through depending on territories. When you’re dealing with a streamer, you’re not adhering to that. You’re not defined by box office numbers. There [are] not the same hoops.”

Adds Garcia, “It’s about telling the best version of the story you want. You’re being measured by different metrics. It’s actually a very freeing process, making a film at a streamer.”

That doesn’t mean Seven Bucks is done hyping up the theatrical experience. On the contrary, the production company’s biggest test is still ahead. In 2022, Johnson will return to theaters with Black Adam, a summer tentpole based on the DC Comics villain, typically a nemesis to Shazam. Johnson announced he’d be playing the role way back in 2014, but the film had to undergo extensive creative retooling and survive a pandemic before rolling cameras.

“We did not want to start [filming] if we didn’t feel good about it,” Garcia reveals. “We were trying to figure out how to introduce Shazam and Black Adam together. We were struggling with it.”

The problem: a conflict of tones, given that Shazam was an adolescent boy who found joy and a new family through his superpowers, whereas Black Adam was a former slave who turned those same powers against his oppressors. DC’s Shazam! movie cast Zachary Levi as its lovably goofy hero and took cues from Big more than Batman. Black Adam couldn’t have felt less compatible as a character.

“Shazam has a broader tone that doesn’t match Black Adam,” Garcia explains. “There wasn’t enough space to introduce them in one movie.” They later came upon the idea of letting the two characters inhabit their own movies. “That freedom allowed us to start crafting the Black Adam we wanted. Black Adam in a movie [like Shazam!] is not what fans would want.”

Black Adam is also a new kind of movie for Johnson, who’ll play a villainous anti-hero. It’s not the first time Johnson has played heel, but Black Adam is “evil” in a way markedly different from characters he’s played in films like Doom and Get Smart.

“The first person who comes up to Black Adam [in the FanDome teaser] does not live anymore,'' says Garcia. ”This is a beast. He punches to kill.”

Notes Garcia: “A superhero is only as powerful as the author behind him. In Frank Miller's world, Batman could beat Superman. Everyone knows Black Adam can go toe to toe with Superman [in comics], but in our world, there is no one more powerful than Black Adam. If there is, we have yet to find them.”

A lifelong comics fan, Garcia says Johnson’s character is stronger than Superman — and that a future confrontation might put that to the test.

“The challenge with Superman is that we all know he's got two big weaknesses: Kryptonite and magic,” explains Garcia. “When you have a monster made of magic, it puts Superman in a tough place.”

The Man of Steel may very well be a formidable opponent for Black Adam. But unfortunately for Superman, and as the ruins of his front gate can attest, Johnson’s made a habit of breaking steel before breakfast.

Correction: 11/12/21: This article previously referred to Dany Garcia as Dwayne Johnson’s manager. She is officially his business partner and co-founder of Seven Bucks Productions.