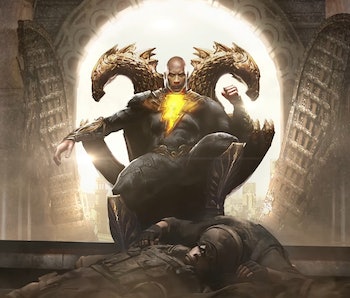 “Kahndaq needed a hero. Instead, they got me.” Hollywood megastar Dwayne Johnson is on his way to the DC Extended Universe, in the boots of the supervillain/anti-hero Black Adam. Primarily a nemesis for the superhero Shazam, Black Adam will first appear in his own movie, simply titled Black Adam, due for release in 2022.

Here’s everything we know about Black Adam so far, from its long development history (dating back to 2007) to current plot details, casting, trailers, and more. Bookmark this page and check back often as we’ll update this page with more information as it is released.

When is the Black Adam release date?

Black Adam will be released in theaters on July 29, 2022. The movie was originally scheduled for December 22, 2021, but due to the coronavirus pandemic delaying filming, the movie’s release date was pushed into the summer of 2022.

What is Black Adam?

Black Adam is a new superhero movie set in the DCEU. It will share continuity with films like Man of Steel (2013), Batman v Superman: Dawn of Justice (2016), Shazam! (2019), and The Suicide Squad (2021). But the movie more or less still stands on its own, acting as Black Adam’s origin story in ancient Kahndaq to his arrival in the modern 21st century.

Who is Black Adam?

Black Adam is a supervillain turned anti-hero from the DC Universe. He first appeared in Marvel Family #1 by Shazam creators Otto Binder and C.C. Beck.

Black Adam is primarily the antagonist of Shazam (formerly Captain Marvel), but throughout the ‘90s, he underwent a shift towards the morally gray status of “anti-hero.” He’s not necessarily evil, but his methods to save the world don’t mesh well with the Justice League, either.

While Black Adam’s origin story has undergone several revisions, the main gist is that Black Adam is an ancient Egyptian named Teth-Adam. His purity brings him to the powerful wizard Shazam, who grants him the same powers Shazam later gives to Billy Batson.

Teth-Adam is given the name “Mighty Adam” by Shazam. But when Teth-Adam uses his powers to kill and overthrow the pharaoh, an enraged Shazam banishes Mighty Adam — now calling him “Black Adam” — to the edges of the universe.

Who is starring in Black Adam?

In addition to Dwayne Johnson in the title role, the movie will also star the following:

Who is directing Black Adam?

Jaume Collet-Serra, who directed several Liam Neeson action films like Unknown (2011), Non-Stop (2014), Run All Night (2015), and The Commuter (2018), is directing Black Adam. The DC movie will be the second collaboration between Collet-Serra and Johnson, having previously worked on the recently-released Disney movie Jungle Cruise.

In February 2021, The Hollywood Reporter reported that writers Rory Haines and Sohrab Noshirvani (The Mauritanian) “wrote the latest draft” of the movie.

Is there a trailer for Black Adam?

At DC FanDome 2020, DC released a teaser trailer made up of animated concept art and narration by Dwayne Johnson. The trailer succinctly gives an overview of Black Adam’s premise as well as the aggressive voice of Dwayne Johnson as Teth-Adam. You can watch the teaser below.

Then, at DC FanDome 2021, we got our first look at Teth-Adam in live-action. A minute-and-a-half clip dropped from the film shows the titular character being awakened and laying the smackdown on the mortals around him. You can watch below.

Oh yes. io9 has a more comprehensive breakdown, but Johnson’s attachment to a Black Adam movie has been in the works since 2007. Years later, in 2014, Johnson finally confirmed on Twitter that he will play Black Adam in a movie. Johnson spent the next several years talking about Black Adam, repeatedly making mention of the character’s vague moral compass.

“Yes, of course, Black Adam—in the mythology—is a villain. Or he can be considered an antihero. Or, to some, he’s a hero. To some who have a black heart, like me. Again, I love the backstory that he started off as a slave and he was held down. I think that kind of backstory—about a man who’s held down and he rises up out of that to become greater and then dealing with the conflict and pain of losing his family—it’s dark. But it also adds to the gravity and adds to the weight of the story. And it means to me, uh, he’s a hero.”

Rumors of a Dwayne Johnson cameo in Shazam! in 2019 didn’t pan out, though the movie had a deleted scene that hinted at a “seventh member” of the family. By the end of 2019, the film had a director and cinematographer (Larry Sher) and even a 2021 release date. But the Covid-19 pandemic in 2020 delayed filming to April 2021 and a release date of July 2022.

More like this
Entertainment
2 hours ago
'Umbrella Academy' Season 3 release date, trailer, cast, and plot for the Netflix superhero series
By Mae Abdulbaki and Mike Bloom
Gaming
5.19.2022 4:00 PM
MultiVersus could be the first Smash clone to truly challenge the throne
By Eric Francisco
Entertainment
5.6.2022 11:30 AM
You need to watch the best superhero movie franchise on Hulu before it leaves next week
By David Grossman