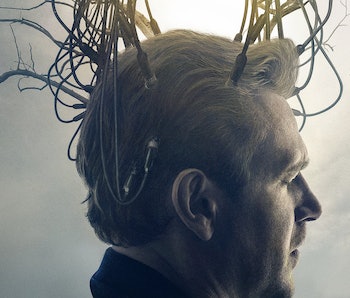 Utopian stories are few and far between. In a post-Hunger Games world, you can't go into a bookstore without seeing a handful of novels set in grim, post-apocalyptic worlds. Idealized visions of the future seem to be less popular, or difficult to imagine. But this 2017 sci-fi movie, now available on Netflix, bridges the gap between utopian and dystopian to craft a movie as entertaining as it is disquieting.

The Discovery is a 2017 Netflix original starring Jason Segel, Rooney Mara, Robert Redford, and Jesse Plemons. It follows Will Harbor (Segel), a neurologist, coming back to visit his dad Thomas (Redford) on the two year anniversary of his father's revolutionary discovery. That discovery? "Overwhelming proof" that there is, in fact, an afterlife.

This is told to the audience in a visually gripping opening scene, showing a reporter (played by director Charlie McDowell's mom, Mary Steenburgen) interviewing Thomas about his paradigm-shifting discovery. It seems idyllic, right? Proof that an afterlife exists. Proof that loved ones who die are really in a "better place," or at least a "different place."

However, the interview erases the utopia very quickly. The interviewer confronts him with the rise of death cults and wide swaths of people who kill themselves in order to "get there." When Thomas tries to answer, he's interrupted by one of the crew members of the broadcast shooting himself.

Needless to say, this is not a movie for the faint of heart. Regardless of your stance on trigger warnings, suicide is depicted and possibly glorified in this film, and the viewing experience is a lot easier if you know that going in. But beyond the gruesome subject matter, the film also explores romance, regret, existence, and even the multiverse. It has all the realism of a heartfelt drama, but a deliberate sci-fi spin that ripples throughout every scene.

The Discovery is a movie that defies being locked into a genre while simultaneously being a perfect example of many genres. It's a drama, it's a romance, it's a sci-fi movie, it's a psychological thriller, it's a whodunit, it's a noir. In worse hands, it would feel full of gratuitous misery or lofty sci-fi parable, but the cast plays every scene with a level of seriousness that keeps the audience involved while not making the world seem unbelievable.

Segel plays Will Harbor as a man who carries the weight of so many lives on his back. He's expertly paired off with Mara as the flighty Isla, and their ever-changing relationship forms the backbone of the narrative, and by the shocking end, you'll reconsider not only everything you think about their dynamic, but also the very nature of the "Discovery" itself.

The Discovery is now streaming on Netflix.