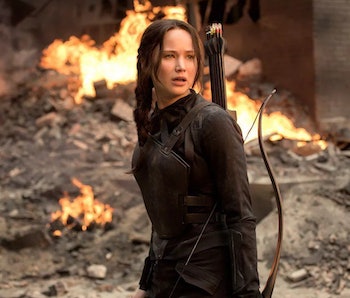 It's been 12 years since The Hunger Games hit bookshelves and eight since it premiered on the silver screen, but the fandom surrounding Suzanne Collins's dystopia is still going strong. While Jennifer Lawrence may be off to bigger and grander things now, fans are still theorizing about the complex world of Panem, and one theory may reveal the disturbing truth behind the ritual manhunt known as The Hunger Games.

Reddit user Burnnoticelover argues that the true purpose of the Games was not to provide bloodsport entertainment for the masses or to commemorate a historic event, but to judge each district's likelihood to revolt.

Any dictator worth his salt knows the group you want to keep happy is the one most likely to successfully rise up against you. Each year, President Snow rounds up two random samplings of every district's youth and pits them against each other, easily figuring out where each populace stands in terms of skill, combat training, and desperation.

So while it may seem Districts 1 and 2 are the most privileged and that's why they do well in the Games, the truth is actually the reverse: they do well in the Games, so they are alloted the most privileges. Usually, these districts send Careers to the Hunger Games who have been training for them all their life. By allowing these Careers to volunteer, President Snow keeps those looking for glory vying for a spot in the Games instead of a spot in a rebellion. If they don't achieve that glory by winning, they die, so it's sorted either way.

There's more evidence for this in the movies and books as well: on top of testing his constituents, Snow can also test out potential countermeasures to use should one of the Districts attempt to overthrow him. The Hunger Games arena provides the perfect sandbox to test all sorts of defenses against an uprising. This explains why later in the series, the Capitol was lined with traps: they were able to test out whatever methods they wanted on 26 teenagers annually.

Another tactic is the system wherein food is given to those willing to put their name into the lottery multiple times. This increases the likelihood of the most desperate, most willing to fight, getting chosen, so the game is rigged to show just what lengths districts are willing to go to in order to survive. The Hunger Games was already a horrific story, but this theory adds a whole new layer of cruelty.

Collins' upcoming prequel novel, The Ballad of Songbirds and Snakes, will focus on Snow's younger years. We're likely to learn more about his ascent to power and his nefarious goals with the Hunger Games when the book hits stores in May. But we wouldn't be surprised to see some version of this compelling theory in its pages.

The Ballad of Songbirds and Snakes comes out May 19.