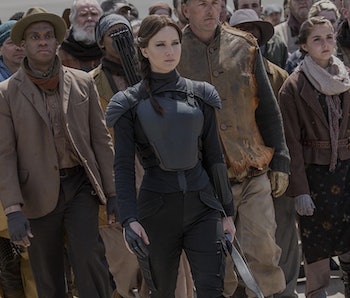 There’s no doubt that The Hunger Games: Mockingjay Part 2 is going to crush the box office when it opens on Friday, but those who think it’s just another blockbuster are in for a surprise. The film stays true to the novel — the series’ darkest — with carnage galore and a “nothing matters” tone, making it sure to be the least mainstream hit in recent memory.

The Hunger Games franchise has been disguising itself as a typical YA “chosen one” narrative, but its final chapter pulls the curtain up, revealing the woman behind it to be as bleak and bloodthirsty as George R.R. Martin. Against all odds — because the odds are decidedly not in Mockingjay’s favor — this politically charged bitter story climbed to the top of pop-culture’s heap and is now smirking down at the masses. For those who brush it off as a teen franchise, think again: It occupies a truly curious place in our culture.

Sure, Mad Max: Fury Road is also a popcorn flick with an unlikely plot for mass appeal, but that’s an “adult” movie, right? Teen franchises full of love triangles and pretty pouting heroines and smirking villains might dip into the darkness, but they don’t wallow in it. But the final installment of the The Hunger Games blurs the line. Mockingjay Part 2 is a harrowing war movie that doesn’t shy away from PTSD and trauma; it doesn’t go to the depths of darkness as much as the book, though, as to make the proceedings watchable.

Stef Woods, a professor at American University who teaches a course on The Hunger Games, told Inverse, “There are literal casualties, there’s emotional scars and PTSD. Suzanne Collins was a daughter of a Vietnam War vet; she recognizes that young adults are smart — that these things are happening, there’s violence in our schools and communities. She didn’t want to gloss over that. If what she was trying to convey was the horrors of war, she did.”

For those who read the bleak Mockingjay novel, don’t worry: like the rest of the installments in the series, the film improves upon the book. Gone are Katniss’s breakdowns every ten minutes: Jennifer Lawrence, as usual, gives her far more spirit and steel than the milquetoast she is on the page. And, as usual, she makes the case for a strong performance beating limp prose: What’s more powerful, reading lines like “I zigzag through the mansion and disappear into a wardrobe full of silken things. I yank them from hangers until I have a pile and then burrow into it,” or seeing J Law cry so hard she drools? The strand of drool — which you can see up close and personal in IMAX! — speaks more than the closet-fit.

The deaths are sad, but because this movie has enough explosions to make Michael Bay jealous, neither characters nor audience has time to dwell and be ruined by them, Red-Wedding style. In the book, Katniss says, “In the lining of my pocket, I find a stray morphling tablet and swallow it dry, heading off my rising hysteria,” but nobody’s got time for hysteria in this adrenaline packed film.

Lest you worry that taking away some emotion makes the film too soft, it needed to be removed. The film still goes there — whichever “there” you’re imagining — whether it’s the lizard-mutt death that’s up there with Sirius Black’s or whether it’s the way the love triangle resolves. The film does not shy away from the book’s non crowd-friendly storytelling turns, and it’s sure to raise eyebrows among non-readers. There were lots of gasps and sobbing in the critical screening I saw. We’re not in YA land anymore, guys. Maybe we never were.

Mockingjay’s very existence, in fact, is an argument for breaking down the wall between ‘adult’ and ‘kids stuff.’ There’s no question that this film is crueler to its characters than any superhero movie to date, and it dwells on the effects of combat as much as any prestige war movie like Jarhead or The Hurt Locker. Karin Aguilar-San Juan, another professor who teaches a college course on The Hunger Games, told Inverse, “When things are really popular, they can be mindless and thoughtless, but people who are drawn to The Hunger Games are thoughtful and have some critique about our society.*

Even so, the novel is big on ideas but lacking in its presentation. But like other films that improve upon their promising yet skeletal source material, the script accomplishes something every book reader was probably wondering: it makes the dark shit work. Like the previous films, particularly Catching Fire, it improves the story by making Katniss more assertive and tweaking the tone of scenes like the epilogue. (Yes, that’s unfortunately still there, you’d think the Harry Potter epilogue would have taught everyone a lesson, but apparently not). The question is, will non-readers be able to swallow Mockingjay’s bitter pill, or will it be too much?

“There are pros and cons to the cinematic version,” Aguilar-San Juan said. “The very last paragraph of the book is extremely annoying. Everyone I know who has a brain thinks it’s hilarious. But it’s important for us to think of endings we would want; alternates we’d prefer.”

She added, “As long as 12-year-olds understand what those systemic things are, to me The Hunger Games is a good opening to talk about systemic inequality and structures that create pockets of slums. I mean, the fact that we have hunger and illiteracy in our country is ridiculous. But it’s super important to see that the ones who are making the systems are just the so-called workers. Other than Occupy, we don’t have a pocket to air these critiques, so it comes out in things like The Hunger Games.”

The film is not perfect — those explosions — and it dwells on the book’s obstacles to the point that you’re exhausted by the time you arrive at the climax. It also handles Philip Seymour Hoffman’s death awkwardly, with two blatantly obvious scenes at the end. And the epilogue suffers from a Harry Potter and the Deathly Hallows-esque case of Epilogue Hair, though perhaps that’s a rite of passage in franchises that insist on epilogues.

But book readers will be pleased, open-minded viewers expecting an average blockbuster will be pleasantly surprised, and the rest of the viewership, like parents who think this is a family-fun movie or teenagers who want to gaze at Liam Hemsworth and Natalie Dormer, will be faintly traumatized. Mockingjay Part 2 is unlike any other blockbuster, but if the world can handle its themes — not just its famous cast and explosions — the odds might be in the favor of a new era of smart blockbusters.