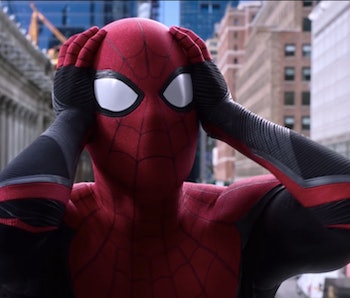 What if the weirdest new Marvel show actually sets up Avengers 5? The Marvel Cinematic Universe is set to take its superheroes to the multiverse and beyond in Phase Four, with Spider-Man 3, Doctor Strange in the Multiverse of Madness, and WandaVision all setting the state for inter-dimensional adventures.

However, the overlooked What If…? on Disney+ might be more important than any other Marvel show or movie in setting up the plot of (the still unannounced) Avengers 5.

What If is Marvel’s upcoming animated anthology series exploring the events of the MCU if they had happened differently. More importantly, the show will introduce Uatu the Watcher, an ancient galactic entity voiced by Jeffrey Wright and tasked with observing the events and actions of other species and worlds. Uatu is one of many Watchers who appears in the comics, and his appearance could get the ball rolling on a famous storyline called “Original Sin.”

First introduced in 1963’s The Fantastic Four #13, Uatu was stationed to watch over Earth. Unlike the rest of his species, however, Uatu grew fond of humanity and intervened on several occasions to help them (breaking his vow to remain a passive bystander). The cosmic being has aided the Fantastic Four in stopping Galactus and has crossed paths with several Avengers — including Thor and Iron Man — while standing witness to some of Earth’s most important events.

Things take a deadly turn in 2014’s “Original Sin” storyline. When Uatu is mysteriously killed and his eyes removed, the Avengers investigate his murder. The search for his killer takes them to the far reaches of space, the center of the Earth, and other dimensions. Then comes a shocking twist in the story that alters everything we thought we knew about Nick Fury, the director of S.H.I.E.L.D.

Fury reveals that he had secretly and single-handedly been fighting off alien threats since the 1950s to protect Earth. With the formula that kept him young depleted, Fury is aging rapidly and looking for someone to replace him. He also killed Uatu.

In a bid to find out who had stolen the alien’s first eye (which records everything he sees), Fury killed Uatu and removed his other eye to find and stop the original culprits. Long story short: Fury ultimately becomes the next Watcher, taking Uatu’s power and place as Earth’s observer.

The Watchers have already made a brief appearance in Guardians of the Galaxy Vol. 2. In the scene, the late Stan Lee is in deep space and surrounded by a few Watchers. “Original Sin” is somewhat convoluted, but it’s possible that What If…? will formally introduce Uatu as one of the Watchers from Guardians 2 before he eventually transitions to a bigger role in the MCU films.

Most fans are probably expecting Avengers 5 to be a powerhouse action film, but this epic storyline could give the superhero team a new noir-inspired angle to work with. We've never seen the Avengers team up to solve a mystery in the MCU — usually, they're just punching an oversized supervillain.

More important of all, tackling Uatu’s death before upgrading Fury to the Watcher’s position could also be a good sendoff for the character who has been so integral to the Avengers’ adventures. After all, Samuel L. Jackson can't keep acting in these movies forever, right?