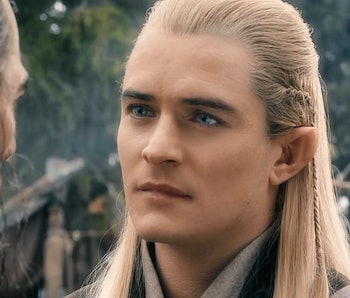 The world of Lord of the Rings is sprawling and epic. From The Shire to Rivendell, the land of Middle-earth is full of gorgeous and exciting places, populated by charismatic characters creatures belonging to various, vividly realized races.

That said, most of the Lord of the Rings films we’ve seen up to this point have focused largely on Hobbits, Men, and Dwarves. Indeed, while other races like Orcs and Ents have played roles in previous Lord of the Rings adaptations, the films themselves have most emphasized those three aforementioned groups.

Amazon’s upcoming prequel series, however, has the chance to be the first live-action Lord of the Rings project to truly put the Elves of Middle-earth at the center of its story.

The Theory — Very little has been officially confirmed about Amazon’s Lord of the Rings series, but we do know that it will take place primarily during the Second Age of Middle-earth and will feature scenes set even earlier than that.

While the show’s Second Age setting opens the door for it to tell interesting stories about Men and Dwarves, the Elves were at the center of some of the most pivotal events of that era. Taking that into account, it becomes clear that the Amazon series has the chance to delve into the history and politics of the Elves in a way that no other Lord of the Rings adaptation has done before.

Hopefully, it’s an opportunity that the show’s creative team won’t pass up.

The Elves of Middle-earth — By setting the Lord of the Rings series during the Second Age, the show’s creative team has the chance to explore and depict a number of fairly interesting stories, including the fall of Númenor. That conflict saw a powerful kingdom of Men grow corrupted by Sauron until, in its arrogance, it unsuccessfully waged war against the world’s divine beings. It’s a story that the Amazon series will no doubt bring to life on screen.

However, this is not the Second Age story that the Amazon series should tell first. Instead, this writer humbly argues that the series should begin with the forging of the Rings of Power.

Playing out thousands of years before the fall of Númenor, the creation of the Rings of Power is a monumental turning point in the history of Middle-earth. Not only do the Rings of Power go on to play major roles in both the Hobbit and Lord of the Rings series, but their creation results in a devastating war between Sauron and the Elves. It’s the kind of epic fantasy story that would help Amazon’s Lord of the Rings series get off to a strong start — and would let the series truly focus on exploring the history and culture of the Elves in an exciting way.

That all stands without even mentioning the Elf-centric conflicts that play out during the Years of the Trees and the First Age, which are two periods that the Amazon series could very well explore at some point.

The Inverse Verdict — Opening with the forging of the Rings of Power would help Amazon’s Lord of the Rings series fundamentally tie itself to the Peter Jackson-directed films that audiences know and love. It’d allow the show to tell its own story, while simultaneously keeping viewers who might not be as invested in the history of Middle-earth aware of how it connects back to the tale they already know.

From a less logistical perspective, starting with the forging of the Rings of Power — and the war that subsequently breaks out between Sauron and the Elves — would ensure that the series truly manages to stand out from its cinematic predecessors. The show would not only be able to flesh out a story most viewers may only be somewhat familiar with, but would also focus on characters and parts of Middle-earth Peter Jackson’s Lord of the Rings and Hobbit films couldn’t explore as deeply.

More like this
Entertainment
6.25.2022 12:30 PM
'Rings of Power' video sets up the return of Tolkien's most underrated creatures
By Alex Welch
Entertainment
6.16.2022 1:00 PM
How Rings of Power expands Tolkien’s world by “honoring his work”
By Eric Francisco
Entertainment
6.23.2022 7:00 AM
The Boys Season 3 Episode 6 release date, time, plot, cast, and trailer for “Herogasm”
By Jeff Spry
Related Tags
Share: