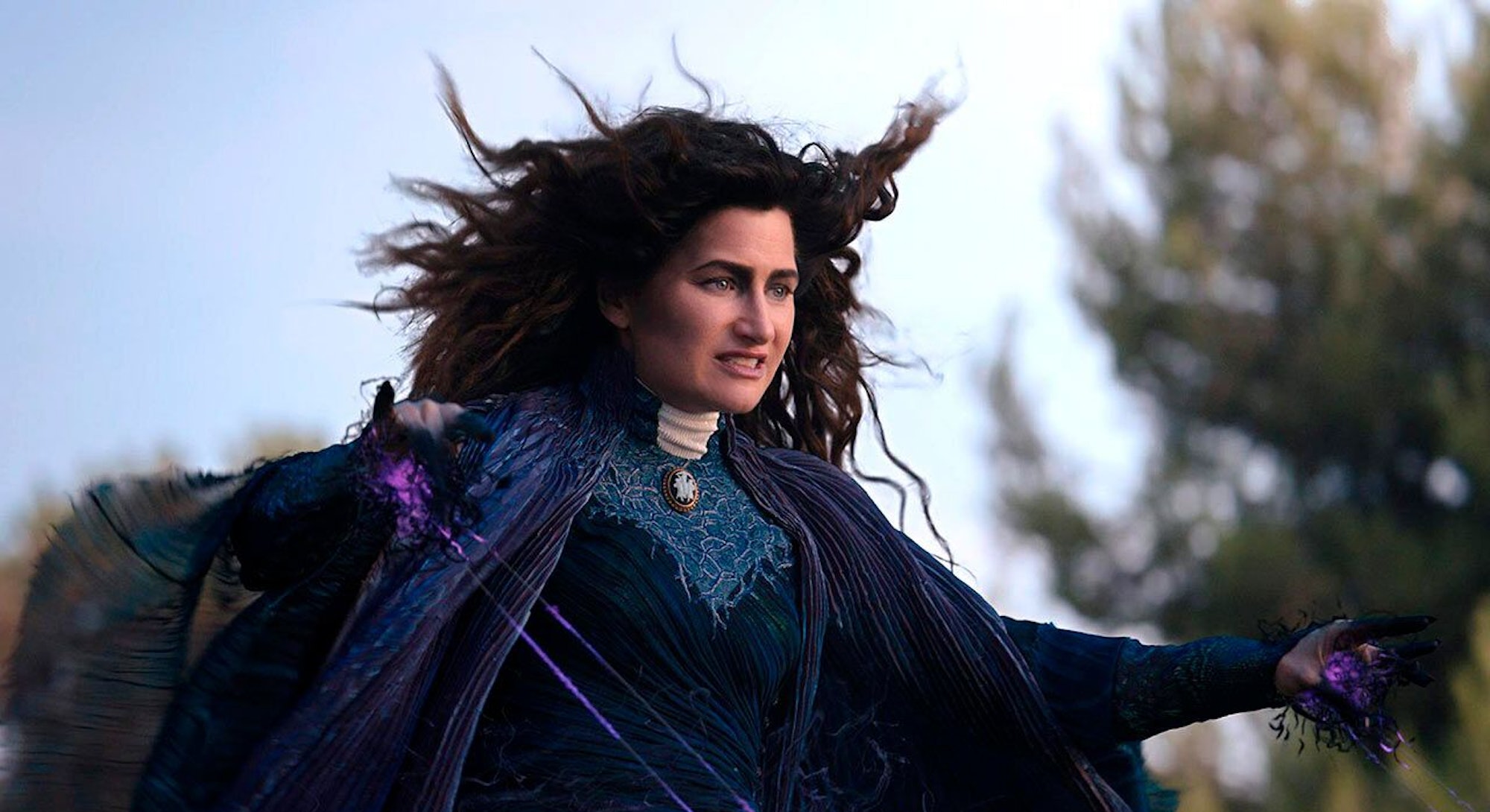 Something wicked this way comes.

Kathryn Hahn cast a spell over audiences when her nosy neighbor character Agnes was revealed to be none other than the witch Agatha Harkness in WandaVision. The Disney+ series made Agatha the series’ central villain — “it was Agatha all along” — and she attempted to steal Wanda’s chaos magic for herself.

Of course, the confrontation didn’t work out so well for Agatha and she received what was essentially a magical lobotomy from Wanda, keeping her trapped in Westview in the guise of the nosy neighbor.

As chilling as that fate was, it was also a temporary status. Hahn’s portrayal ensured WandaVision would not be the last we saw of Agatha, and rumors quickly circulated that the character would be receiving her own spin-off show. This was later confirmed when Agatha: House of Harkness was announced.

The series received a title change, Agatha: Coven of Chaos, when it was re-announced as part of Phase 5 at this year’s SDCC. The new title suggests that not only will we be seeing more of Harkness’ family and other witchy bloodlines, but also a further exploration of chaos magic in the MCU.

With vampires on the rise, a werewolf soon to be howling by night, and a Man-Thing lurking in the darkness, witches are another natural extension of the MCU’s growing supernatural corner. Here are some of the most important ones we might see circling Agatha’s Coven.

Agatha’s future in the MCU

Since her debut in Fantastic Four #94 (1970), Agatha Harkness appears most often as an ally, assisting everyone from the Scarlet Witch to the Fantastic Four. While mysterious and sometimes manipulative, she’s never been quite as evil as the adaptation we saw in WandaVision. (It’s also worth noting that Marvel Comics is introducing a younger version of Harkness as part of a flashback narrative in the current Midnight Suns miniseries.)

The MCU version of Agatha took out her former coven — including her mother — in the 1600s after being tried for using dark magic. Coven of Chaos seems likely to feature Agatha building a new coven of her own, finding allies who are also after chaos magic that they can use to reshape reality.

Whether this means Agatha will travel the multiverse in search of Wanda (Elizabeth Olsen) or Wanda’s magical son Billy (Julian Hilliard) to steal chaos magic from them — or if she has another source of claiming that power — remains to be seen. But it’s likely that for all of Agatha’s skills in dark magic, there will be a darker adversary standing in her path.

Nicholas Scratch and the Salem Seven

You don’t live several centuries without siring a few offspring. Agatha’s son, Nicholas Scratch, made his debut in Fantastic Four #185 (1977) as the leader of a hidden community of magic users in Colorado called New Salem.

Scratch fathered seven children, all afflicted by various animal qualities: Brutacus, Gazelle, Hydron, Reptilla, Thornn, Vakume, and Vertigo, who battled the Fantastic Four and later the newly wedded Wanda and Vision. Scratch turned his children against their grandmother, blaming her for abandoning their community for humanity. Though he was defeated and sent to the Dark Realm, he would later return as an ally of Dormammu and Mephisto.

Obviously, should Scratch and the Salem’s Seven show up in Coven of Chaos, they’ll be reimagined to fit with Agatha’s less-than-favorable relationship with humanity. But there is something compelling about the child of Harkness feeling abandoned by his mother’s quest for power, and then searching for a means to become more powerful than her by holding sway over the population of dark magic users.

A politician as much as a warlock, Scratch could be the manifestation of Agatha’s sins, and his children fodder for the series’ magical battles. And, hey, if Mephisto didn’t pan out in WandaVision, maybe Coven of Chaos is where he’ll rear his head…

One of Marvel Comics’ oldest villains, and based on the character of the same name from Arthurian legend, Morgan Le Fey made her debut in Black Knight #1 (1955). In the comics, she’s sought both the Darkhold and Wanda’s chaos magic, eventually (and temporarily) transforming reality into a Middle Ages version with herself as ruler.

Morgan Le Fey is one of the most powerful magic users in the Marvel Universe. Skilled in Elven, Norse, and Dark magic, she gives Doctor Strange a run for his money, and is known for taking on the Avengers all on her own.

As a mentor and rival, Le Fey could be a compelling foil to Agatha. Of course, were she to join any coven Agatha might create, she would likely do so with plans to eventually usurp her.

A version of Le Fey appeared in the 1978 TV movie Doctor Strange, where she was portrayed by Jennifer Walter. More recently, a version of the character in the third season of The Runaways, where she was portrayed by Elizabeth Hurley. While the status of The Runaways in MCU canon is unknown, Hurley could reprise her role as either the same character or a Variant if Marvel Studios wanted to uphold her take. Hahn and Hurley could make for a great, campy, witch rivalry.

She’s no Madonna. Cynthia Von Doom, the mother of Victor Von Doom, first appeared in Astonishing Tales #8 (1972). A Romani woman trained in sorcery by her tribe, she led a revolt against a Latverian baron to win a homeland for her people.

Unfortunately, Cynthia’s magic wasn’t powerful enough on its own. So she made a deal with Mephisto — which is never a good idea. Cynthia brought about her revolution but lost her life in the battle. Her soul was claimed by Mephisto.

Decades later, Victor Von Doom would build a machine in an attempt to contact his mother in Hell. The machine failed and exploded, though not before showing Victor a vision of his mother being tortured in Hell, and Doom was left terribly scarred, confining him to his fate as Dr. Doom. Years later, he would ally with his lover, Morgan Le Fey, and later still, his enemy, Doctor Strange, in an attempt to free his mother from Hell, which they achieved by purifying her soul.

Doom is certainly coming to the MCU, sooner rather than later. While Cynthia likely wouldn’t play a role in any present-day narrative concerning Agatha, it’s possible the two met in the past. If Morgan Le Fey isn’t in the show, it’s likely a reference will be made to her. A mere name drop would be enough to send fans into a frenzy, and hopefully pave the way for more of her story to be told in a future Doom-centric project.

In Phase 4, Marvel has become more adept at using characters and concepts long out of use and forgotten. From the Clandestine in Ms. Marvel to Luke Jacobson in She-Hulk: Attorney at Law, the MCU has really been pulling out the deep cuts. If it wants to do this with Coven of Chaos, the 2004 comic series Witches is a good option. The 2004 comic series featured Jennifer Kale, Satana Hellstrom, and Topaz (all supporting characters from past Marvel horror books) united by Doctor Strange to combat a demonic threat.

Trading in costumes for urban fashion that was very early 2000s, Witches felt like a pitch for a TV series that never happened — Marvel’s very own version of Charmed. Only, now, it actually could happen, with Agatha rather than Strange bringing the women together. And, hey, maybe just for fun, Madisynn King (Patty Guggenheim) will wander in for a bit. She’s got to have some magical knowledge at this point, right?

Whoever makes up Agatha’s coven of chaos, or stands in her way, Marvel Studios has the opportunity to create a wonderfully strange brew.