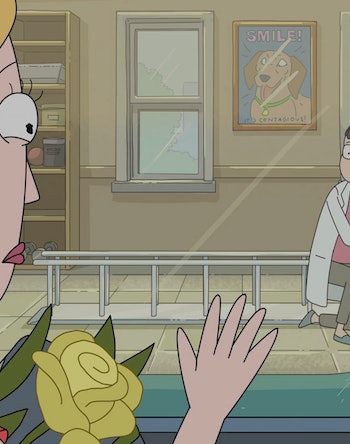 If there’s a complex recipe for making the perfect Rick and Morty episode that hits every one of the series’ most beloved motifs and storytelling trends, it’s “Total Rickall,” the superb Season 2 episode where telepathic alien parasites try to infiltrate Earth via the Smith family’s memories. They do this by implanting pleasant memories into everyone’s minds, replicating as a bizarre variety of strange beings. Rick warns everyone to watch out for “wacky, zany characters that suddenly appear.” Each one is more weird and hilarious than the last. There’s a dinosaur with a camera, a giant rubber ducky with arms, and a little dude that’s just an anthropomorphized pencil.

In execution, “Total Rickall” has an improvisational feel similar to Rick and Morty’s Interdimensional Cable bit from “Rixty Minutes” and “Interdimensional Cable 2: Tempting Fate,” but because it’s essentially a clip show episode with a series of (fake) flashbacks, comparing it to “Morty’s Mind Blowers” is even more appropriate. Whereas each of those episodes goes off-the-rails in entertaining ways, “Total Rickall” keeps its focus to tell a tight, emotional story about the relationships between members Smith family, chief among them the turbulent bond between Rick and Morty.

The climax of the story happens with the realization that these parasites can only create happy memories, so for someone to be real, you have to recall negative memories of them. This thoughtful commentary on the messiness of life and family is universally relatable. Even the people we love the most disappoint or upset us sometimes. But that’s okay. That’s a big part of what it means to be a real human being.

There’s also the unforgettable moment of Beth shooting Mr. Poopybutthole at the end of the episode. It’s peak Rick and Morty, somewhere at the insane, nihilistic intersection of heartbreaking and hilarious.

It all begins with what’s easily the most uproariously funny cold opens in the show’s history that also introduces us to one of the most important side characters ever: Mr. Poopybutthole, the cheery shrill-voiced lad who’s gone on to offer commentary on the series in the Season 2 and Season 3 post-credits scenes.

The episode opens on a jovial conversation with Uncle Steve, Jerry’s older brother who we’ve never met before but who’s supposedly been living with the family for about a year, except we’ve never seen him before. Rick, perhaps because of his unnatural ability to break the fourth wall, is able to detect that Uncle Steve isn’t real and promptly shoots him in the head. Ouch!

The obvious punchline here is that we’re supposed to assume that Mr. Poopybutthole is yet another pleasant character that one of these parasites creates, but Rick and Morty pulls a fast one on the viewer by doing the opposite.

“Total Rickall” is the fourth episode in Season 2, and this opening sequence includes an important visual connection with Episode 2, “Mortynight Run,” that’s led many fans to cling to a convoluted theory that certain episodes take place in dimensions other than the show’s usual setting. Given the nature of the multiverse on Rick and Morty, this is a mathematical certainty, but we’ll probably never get confirmation either way.

At the end of “Mortynight Run,” Rick picks up a bunch of green rocks with pink crystals on an alien world and dumps them in his car’s trunk. Then here in the opening, he dumps those same rocks into the trash as he walks into the room. This could mean that most of Rick and Morty Season 2 takes place in an alternate reality or it could mean that the Rick and Morty writers love messing around with fans. Either way, it’s a great way to enhance an already stellar opening to the show’s best episode.

Even the opening credits for this episode retcon the series to include Mr. Poopybutthole as a member of the family who tags along on Rick’s adventures as often as Morty does. At a blistering pace, “Total Rickall” thunders through a series of false memories and fake characters. Things start simple enough with regular people like Uncle Steve and Cousin Vinnie, but by the end, we’ve also met Amish Cyborg, Ghost in a Jar, and Hamurai … a samurai with armor made of ham.

The funniest of the many great jokes in this episode comes in the form of Sleepy Gary, who’s retconned as Beth’s new husband, the father of Morty and Summer. Jerry is just Sleepy Gary’s best friend who always hangs around. Things go even deeper when a tender memory between Sleepy Gary and Jerry reveals that they’re lovers. Not only do the parasites erase Beth and Jerry’s marriage, but rather than accuse anyone else, Jerry thinks that he himself is a parasite. (In the epic finale when the family teams up to kill all the parasites, Jerry doesn’t even get to participate. Owned!)

Between this and an early episode where Jerry gets his head stuck in the railings on the staircase, there’s a lot in this episode for Rick and Morty fans who love jokes at Jerry’s expense.

“These parasites are like bed bugs, and every flashback is another mattress,” Rick explains. This proves true as the episode explodes even further into what feels an awful lot like an overwhelming Where’s Waldo? picture.

“Total Rickall” also feels like one of the earliest points in the series where Morty is vital to finding solutions to the wacky problems the gang finds themselves in. He’s able to figure out simple solutions that Rick overlooks, like in this case when he and Rick get into a vicious verbal argument. Morty has Duck With Muscles and Baby Wizard hold Rick down in the garage, but right before he’s about to kill Rick, Morty realizes the key to it all: negative memories.

The best moments of the episode are the “real” flashbacks to the Smith family being mean to one another. Rick pulls Morty’s pants down at school, causing him to fall down the stairs. Summer kicks Morty right between the legs because she thought he went in her room. Beth gets too sloppy drunk on wine to drive Summer to school for picture day. Best of all is when a homeless man attacks Beth and Jerry just hides in the car, leaving Beth to fend for herself.

Genuine tragedy strikes when Beth shoots Mr. Poopybutthole. To her credit, we’re led to believe he’s just another parasite. Things go from dark to even darker in the post-credits scene when the family visits him at physical therapy. Here’s when my favorite Rick and Morty joke of all time happens, a culmination of the show’s nihilistic, bleak AF style of comedy:

“He’d like to be alone. He told me to tell you he’s sorry you didn’t have bad memories of him? If you love him, you should leave.”

Rick and Morty writer Ryan Ridley explained in June 2017 that while “Total Rickall” obviously riffs on the movie Total Recall, the real source of inspiration was Buffy the Vampire Slayer. The only thing “Total Rickall” and Total Recall have in common is the planting of false memories.

“I think [Mike] McMahan pitched that as, ‘In Buffy the Vampire Slayer Season 5, they introduce this character, Dawn, as her sister,’” Ridley said. “Everyone’s pretending — I mean, they’re not pretending — they’re treating her like she’s always been there. But you know that, as a viewer, [Buffy] hasn’t had a sister for the first four seasons. So you find out the supernatural explanation for why that is.”

Buffy may not have had telepathic parasites — at least in that plotline — but the root of that sci-fi/fantasy premise is remarkably similar.

“That’s where it started,” Ridley said, “and then we built on top of that The Thing element: They’re all trapped in the house, and they’re all suspicious, and then … I think [Dan] Guterman pitched the idea of, ‘Well, what if this is a way to do a clip show?’” Ridley said, referring to a common episode structure in TV shows, usually sitcoms, where most of the screentime is spent cutting back to quick flashback sequences.

In true Rick and Morty fashion, “Total Rickall” is a smorgasbord of unlikely parodies crammed together for one of the craziest and best science fiction episodes of TV ever.

Perhaps the real lasting legacy of “Total Rickall” is in the introduction of Mr. Poopybutthole, a fan-favorite who — according to the Season 4 trailer — is slated to make his big return to the show sometime very, very soon.

Pour one out for Mr. Poopybutthole, the nicest guy in the Rick and Morty multiverse: