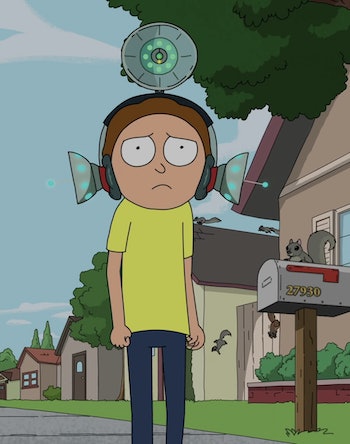 Not only is “Morty’s Mind Blowers” an entertaining alternate to Interdimensional Cable that’s a lot more fun than the random madness of alternate reality television, but these stories actually have an impact on how we perceive the show’s main characters. It also creates an unexpected continuity error that either almost breaks the show or implies that this episode focuses on a Rick and a Morty from an alternate universe.

In the cold open, Rick and Morty spoofs Neil Gaiman’s Sandman character in an Escher-esque realm where a ghoulish man really wants his “truth tortoise” back, but when Morty accidentally looks into the cosmic creature’s eyes, he learns the deepest “Truth” there is. Rather than chilling out with some Interdimensional Cable to recover, the replacement “freeform anthology format” (Rick’s words) is “Morty’s Mind Blowers,” a collection of short stories extracted from Morty’s memories.

Every time Morty suffered through something terrible — or Rick made a colossal mistake that made him look bad — Rick would wipe Morty’s memory of the events and store the memory in a little glass vial. It reveals a whole new dynamic to their relationship. Morty’s grandfather essentially curates his entire existence.

In execution, the “Morty’s Mind Blowers” format means that we get a series of mini-episodes within the episode, like when Morty sees a creepy man on the moon who becomes the new guidance counselor … until Morty’s actions lead the man to suicide. In another, Morty’s meekness and self-doubt poisons a devout alien’s faith, condemning them to agonizing hell rather than the ecstasy of a warrior’s afterlife. As the A-plot escalates, driving Morty and Rick into conflict, the clips become shorter and shorter as the fun increases exponentially.

The most important wiped memory happens about 17 minutes into the episode when, at some point in the past, Rick builds Morty a helmet that lets him talk to animals. What he finds is more than he bargained for.

Morty overhears a bunch of squirrels talking about destabilizing the Argentinian government. Their very intense plan is to “refocus labor class outrage from upper to middle, foster a coup, and install a compliant regime.” This is a thing they did previously in Guatemale. “We need a quorum to pick a new pope, in case the Exxon/Monsanto thing falls through in Africa,” another squirrel says. Squirrels, it would seem, control the human race.

The rodents quickly realize that Morty can hear them, and suddenly, a swarm of squirrels gathers around the garage to presumably kill Rick and Morty. The only solution is to stun them and move to an alternate universe. Furious, Rick says they “could only do that a couple of times,” a reference to how they turned dimension C-137 into monsters during Season 1’s “Rick Potion #9”.

Rick and Morty often flaunts the idea of the multiverse, but never was it felt in such dramatic fashion as that time Rick accidentally “Cronenberg’d” the entire planet in “Rick Potion #9.” They migrated into a reality where that Morty and Rick died in an explosion. So the prime Morty is living with a Beth, Summer, and Jerry that aren’t his original family. The Rick and Morty fandom call this the “Replacement Dimension,” as it’s never explicitly labeled.

With this whole squirrel realization, “Morty’s Mind Blowers” confirms that this universe migration has happened more than once on the show. Yet again Morty has been tricked, along with the rest of us, into thinking his current reality was a different universe. Either Rick and Morty used its biggest twist a second time without us knowing, or the titular duo we’re watching in “Morty’s Mind Blowers” is another pair entirely — similar to the infamous “Ticket Theory.”

Either option is technically possible, but despite how avidly fans want to believe Rick and Morty plays around with this concept, the show’s pair is almost certainly consistent throughout all episodes.

“How many of these are just horrible mistakes I’ve made? I mean, maybe I’d stop making so many if I let myself learn from them!”

“Don’t break your back creating a lesson, Morty.”

“Morty’s Mind Blowers” would be a memorable episode for this revelation alone, but it also raises some interesting philosophical questions.

If we lose the memory of our experiences, particularly our trauma and/or biggest mistakes, will we ever change? Rick and Morty writer/producer Mike McMahan says in an “Inside the Episode” feature, “It’s interesting that Rick knows there are some things that are so big that it’s not that you grow, it just destroys you.”

“Morty’s Mind Blowers” also gives us a clever meta explanation for why Morty is eternally Morty, why he’ll never grow up like Lisa or Bart Simpson. By having so many of his memories removed, he’s in an emotional state of arrested development as result. Morty himself questions, “Maybe I’d stop making so many [mistakes] if I let myself learn from them?”

“Morty’s Mind Blowers” grapples with this same moral dilemma as Eternal Sunshine of the Spotless Mind, when Jim Carrey and Kate Winslet’s characters would rather eliminate all memories of their troubled relationship than deal with the emotional impact of its inevitable disaster. That sounds great in the short-term, but erasing memories of our experiences would render us unable to learn or grow from them.

So if there’s a deeper message to be found in “Morty’s Mind Blowers,” it’s that we should try to be grateful for our experiences, even the bad ones, because at least we’re able to grow. Poor Morty never had a chance.