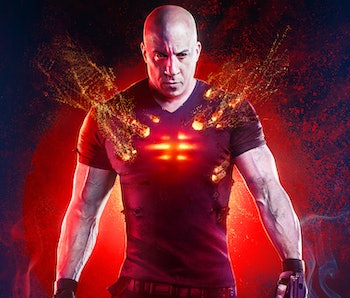 This article about the film Bloodshot was originally published on September 3, 2019 and updated on July 11, 2021 following the movie's release. Read on for the original article, with some new changes to reflect the latest updates on this topic.

In the Marvel Universe, Vin Diesel lends his voice to a walking, talking alien tree. But in the new, emerging Valiant Universe, the actor is giving his whole self to become the human-machine hybrid, Bloodshot.

In March 2020, the first-ever adaptation of a Valiant Comics character hit the big screen in Bloodshot. An ex-soldier with amnesia, what makes Bloodshot different from other superheroes are 1) his ghostly white skin, and 2) a billion microscopic supercomputers, called “nanites,” that run through his bloodstream that allow Bloodshot to heal wounds and interface with any electronic device.

Bloodshot, created by Kevin VanHook, Don Perlin and Bob Layton in 1992, was and is one of the most popular characters from Valiant Comics, a different superhero sandbox with characters that rival Marvel and DC. While Easter egg connections are expected to be minimal, you can bet that Bloodshot, directed by Dave Wilson, could be the beginning of the Valiant Cinematic Universe.

Here’s all you need to know about Bloodshot and his first movie.

When did Bloodshot hit theaters?

Bloodshot opened in theaters on March 13, 2020. It was previously scheduled for theatrical release on February 21 but was pushed several weeks from Sony. However, due to the COVID-19 pandemic shuttering theaters around the same time, the studio released the film digitally two weeks after it opened.

Is there a trailer for Bloodshot?

Yes! A trailer debuted shortly after New York Comic Con and ran alongside the theatrical release of Terminator: Dark Fate. You can watch it below.

Who stars in Bloodshot?

Vin Diesel stars in Bloodshot, but he’s not alone. Along for the ride are:

In 2017, Deadline reported that Jared Leto was in early negotiations to star in Bloodshot as Angelo Mortalli, the original identity of Bloodshot/Ray Garrison from the '90s. Obviously, the deal did not materialize. Leto will instead star in Morbius, another superhero movie from Sony that will feature ties to the Marvel Cinematic Universe.

Wait, back up. Who is Bloodshot? And what is Valiant?

Bloodshot is one of the leading characters from Valiant, a cult comic book publisher with a rollercoaster history. Formed in 1989 by ex-Marvel editor Jim Shooter and attorney/businessman Steven Massarsky, the company established itself during the early '90s comic book boom through titles like Rai, Harbinger, X-O Manowar, The Second Life of Dr. Mirage, Ninjak, and of course, Bloodshot.

One of the biggest innovations Valiant introduced to the comic book industry were "Issue #0" comics, a collector-centric idea that contained a prologue or origin that set up a story's events before the "real" beginning of the title. Today, issue #0 comics can be found from all the major publishers including Marvel and DC. Valiant was also obsessed with releasing collectible chromium covers, and today the company remains synonymous with the gimmick.

Valiant was sold to Acclaim in 1994 but went bankrupt and out of print in 2004. Valiant returned in a big way in 2012 with a massive relaunch of some of its most popular titles, and introduced some new ones along the way. Valiant was later acquired by Chinese company DMG Entertainment in 2018 with the intent of adapting Valiant’s library into a new media franchise.

As for Bloodshot himself, his name is Ray Garrison, or Angelo Mortalli — really, it depends which era of Valiant you're talking about. In the 1990s, Bloodshot was Angelo Mortalli, a Mafia hitman killed under witness protection and subjected to the top secret experiment, Project Rising Spirit. But in the Valiant reboot in 2012, Bloodshot discovered he had another identity: Raymond Garrison, a U.S. soldier who only became “Angelo Mortalli” in an undercover mission to infiltrate the Cianelli crime family.

Bloodshot's nanites allow him to regenerate lost limbs, heal wounds, and interface with any machine. Basically, if you combine Wolverine, the Punisher, and Cyborg into one character, you have Bloodshot. Just don't tell that to his face.

So what's Bloodshot about?

As the film's trailer reveals, Bloodshot from director Dave Wilson will reveal Ray Garrison's transformation into Bloodshot. But instead of the traditional "origin story" seen in movies like Iron Man and Captain Marvel, the movie focuses on Ray already being a subject of Project Rising Spirit and undergoing a tortuous process of having his memories manipulated. This encourages Ray to break free and use his powers as Bloodshot to find the people responsible for turning him into a superhuman monster.

“It’s not a traditional superhero origin movie,” said Hunter Gorinson, VP Brand & Content Strategy at Hivemind, in an interview with Inverse. “When we were working on the film from the jump, [we asked ourselves] why does Bloodshot feel different from any other ‘superhero’ movie out there? That starts with the visual aesthetic. It’s very much reflected in that.”

“We’re not following a tried and tested movie structure,” said producer and former CEO of Valiant Comics, Dinesh Shamdasani, in an interview with Inverse at New York Comic Con 2019. “That is very rare in a post-internet age, where you legitimately don’t know what’s going to happen. The opportunities are endless.”

Will Bloodshot kick off the Valiant Cinematic Universe (VCU)?

Maybe, but don't count on it. As Shamdasani also told Inverse, "The shared universe is not a top priority."

“When we were at Valiant [Comics], there was a philosophy that the best idea wins. For us, that meant the shared universe. Valiant is the only universe built from the ground up to be a shared universe," Shamdasani told Inverse at New York Comic Con. "If we’re going to carve out a legacy in film, then it needs to take every opportunity to be unique. The philosophy now is different."

How did Bloodshot do at the box office?

Bloodshot grossed $10 million in the United States and Canada, and $27.2 million in other territories, for a worldwide total of $37.1 million. Its totals took a huge hit due to the COVID-19 pandemic causing massive stay-at-home orders and theaters closing down around the same time.

What did critics have to say about Bloodshot?

Bloodshot has a 30% rating on Rotten Tomatoes, a score of 44 on Metacritic, and a B on CinemaScore. Overall, the film earned mixed reviews, praising the visual effects sequences, but surprisingly panning Diesel’s performance.

Will there be a sequel to Bloodshot?

As mentioned above, Bloodshot intended to be the start of a possible Variant Cinematic Universe, conceived to continue with a sequel, two Harbinger films, and then a crossover called Harbinger Wars. Unfortunately, those plans were in jeopardy due to the middling box office performance and reviews of the movie.

But don’t count Bloodshot out. The franchise may be changing hands, with Paramount taking the reins from Sony in 2019. But in November 2020, it was officially announced that Bloodshot would be returning for a sequel, with Diesel confirming his continued involvement the next month.

This article was originally published on Sep. 3, 2019