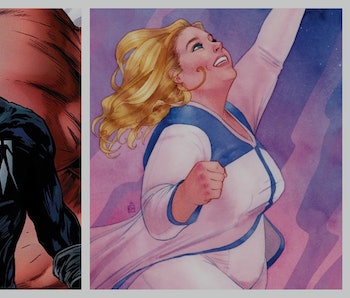 Marvel and DC may dominate movie theaters and TV streams, but it’s only a matter of time until the heroes of Valiant hit the big screen. Vin Diesel is already shooting Bloodshot with director Dave Wilson, but who else from the Valiant universe can come to life? And who should play them?

Faith, a fangirl of comic books and TV shows who wields telekinetic and psychokinetic powers as well as the ability to fly, fights evil in the Valiant universe as Zephyr. Faith/Zephyr is also notable for being one of the first plus-size female superheroes in all of genre media.

Houser, who began writing Faith in 2016 and is currently scribing Faith’s newest story arc Faith: Dreamside, tells Inverse she would want Faith to go to an unknown performer as their breakout role. But she’s also not opposed to one star who has already expressed interest on Twitter.

“Part of me really wants it to be the breakout role for an actor who hasn’t had their break yet than a familiar face,” Houser says. “But I also know Shannon Purser from Stranger Things has also expressed interest in playing Faith. As someone who is also writing Stranger Things comics, that would be pretty cool.”

In June 2018, Sony announced plans to produce a feature film on Valiant’s Faith. Neal Moritz, Toby Jaffe and Dan Mintz are on board to produce, with screenwriter Maria Melnik (Escape Room) penning the script. When the news surfaced online, Purser offered to “send her demo reel.”

“For Jack, maybe Donald Glover,” Diggle says. “He can bring the charm but he can also bring the dark side, which I think the character needs both.”

Shadowman, real name Jack Boniface, was created by Jim Shooter and Steve Englehart, and Mike Manley in 1992. A “voodoo Daredevil” from New Orleans, Jack is a musician who earns his supernatural gifts of enhanced strength, speed, endurance, reduced fear, regeneration, and more from Master Darque.

Shadowman was an early hit for Valiant in the 1990s, and starred in a commercially successful video game Shadow Man for Nintendo 64, PlayStation, Dreamcast, and PC in 1999. A new Shadowman series from writer Justin Jordan debuted when Valiant relaunched in 2012, and in 2018, Andy Diggle (Green Arrow: Year One) became the new writer on a new Shadowman volume.

In 2015, Sony acquired the rights to produce five films based on Valiant comic books. Bloodshot, the first of the films, is currently in production. The film is written by Eric Heisserer (Arrival) and produced by Dinesh Shamdasani, who helped resurrect Valiant in its successful return in 2012.