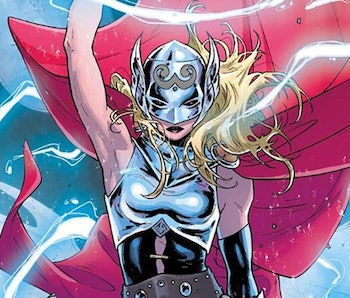 The adventures of the God of Thunder continue. Chris Hemsworth isn’t done making Marvel movies yet, because Marvel Studios revealed Thor: Love and Thunder during San Diego Comic-Con 2019. Valkyrie returns as the king of New Asgard, and Natalie Portman’s Jane Foster will somehow become lady Thor, assuming the god of thunder’s powers for herself. We’re in for a thunderous ride.

There wasn’t a single wasted minute during Marvel’s San Diego Comic-Con 2019 presentation on July 20, and for many of us, Marvel Studios head Kevin Feige presenting the fourth Thor film was a highlight. Plenty of juicy Thor 4 details were announced, including a title of Thor: Love and Thunder, all mere days after Taika Waititi was reportedly confirmed as the director.

Here’s everything we know so far about Thor: Love and Thunder, including the release date, the plot, returning cast members, all the crossover potential with other stories, and so much more.

What does “Thor: Love and Thunder” mean?

“Love and Thunder” seems like a unique subtitle with no comics precedent that riffs on the movie’s themes.

“Love” must reference Jane and Thor’s romantic history, but also how Valkyrie is ready to open her heart to a new partner who could help her rule New Asgard (aw!). “As new king, she needs to find her queen,” Valkyrie actress Tessa Thompson said during the panel. “That will be her first order of business. She has some ideas. Keep you posted.”

In an interview with i09, Kevin Feige confirmed that the film would include an “LGBTQ storyline.” Do Valkyrie and Jane Foster fall in love? Or is there a new woman Valkyrie pines for?

“Thunder” obviously references Thor’s status and powers as the god of thunder — powers that will seemingly pass over to Jane Foster during the film. But it also could reference the potentially stormy reunion between the Avenger and his former lady love will, as it’s been years since their last face-to-face.

When will Thor: Love and Thunder be released?

Thor: Love and Thunder — the fourth overall Thor movie — will be released on May 6, 2022. This is the fourth release date for the film. It was originally scheduled for November 5, 2021, but the coronavirus pandemic delayed the MCU release schedule and filming for Love and Thunder. It will serve as the sixth film in Phase 4.

Who is directing Thor: Love and Thunder?

The Hollywood Reporter confirmed Taika Waititi would direct Thor: Love and Thunder just days before he appeared onstage for SDCC 2019. This is Waititi’s second time playing in the Thor sandbox; he directed 2017’s Thor: Ragnarok.

Waititi is quickly becoming a favorite with studios under the Disney umbrella. For Marvel Studios, Waititi will direct the fourth Thor film, and he’ll reprise his Ragnarok character Korg for the forthcoming What If…? Disney+ series (as well as Love and Thunder). For Lucasfilm, Waititi directed the eighth episode of The Mandalorian’s first season and voiced droid bounty hunter IG-11 (which earned him an Emmy nomination). And through Fox (a recent addition to the Disney family), Waititi wrote and starred in Jojo Rabbit in 2019, which earned him an Oscar for Best Adapted Screenplay.

Which Thor cast members will return?

The following cast members are returning for Love and Thunder, some of whom have not been seen since 2013’s Thor: The Dark World:

It’s been a hot, hot minute since Jane had a meaningful amount of MCU screentime (her extremely brief screentime in Avengers: Endgame is arguably inconsequential) in Thor: The Dark World. Thompson confirmed Valkyrie will be the first openly queer MCU hero now that she is King of New Asgard and looking for a queen.

After taking off with the Guardians at the end of Endgame, it was speculated whether the “Asgardians of the Galaxy” would continue into Phase 4. Set photos have confirmed that will be the case, backed up by James Gunn himself. It was also leaked back in March 2021 that Sif would be returning to the MCU, having been conspicuously missing in Thor: Ragnarok.

Several other notable Ragnarok characters will be returning. As mentioned above, Waititi will reprise his fan-favorite role as Korg. Additionally, it seems like the Asgardian reenactments will continue. Matt Damon, Sam Neill, and Luke Hemsworth are returning to their cameos as the actors playing Loki, Odin, and Thor, respectively.

What new cast members will appear in Thor: Love and Thunder?

For Love and Thunder’s big bad, the MCU is turning to the big BAT. After heavy speculation throughout 2020, Marvel Studios confirmed in December that Christian Bale would be playing the main villain in the film. He takes on Gorr the God Butcher, an alien granted powers by a mysterious symbiote.

Some big news also came in May when Russell Crowe gave an interview with Australian radio. The Oscar winner casually said that he was on his way to his last day of shooting on the Thor set and that he was playing Zeus. If that is indeed true, it’s a game-changer, as this will be the first time the Greek gods will be brought into MCU canon. Additionally, Melissa McCarthy will cameo as one of the new Asgardian actors, playing Hela in assumingly a reenactment of Ragnarok.

What is the plot of Thor: Love and Thunder?

No official synopsis for Love and Thunder has been released yet — but that doesn’t mean we don’t have a sense of where the story is headed.

In the Marvel Comics, Jane becomes Thor during a four-year arc titled The Mighty Thor, by Jason Aaron and Russell Dauterman, which ran from 2014 to 2018 (she was briefly Thor in a 1978 “What If?” storyline, but that didn’t go anywhere). Waititi specifically mentioned being a fan of Aaron and Dauterman’s Mighty Thor comic, implying one of the stories from the run could serve as the basis for Love and Thunder. Considering this is the first time Jane will assume the mantle in the MCU, Waititi will likely adapt the earliest parts of Mighty Thor’s story.

Where in the MCU timeline does Thor: Love and Thunder occur?

Most Phase Four films will seemingly take place after Avengers: Endgame, except Black Widow. With Mjolnir destroyed in the current timeline, it raises some questions about when Love and Thunder happens. Doesn’t Lady Thor need Mjolnir? Or will she simply wield Stormbreaker? And if Valkyrie is king now, and Stormbreaker is a “king’s weapon,” does that make it hers now?

For now, we can only assume the fourth Thor film will take place in 2021.

Is Thor: Love and Thunder connected to other Phase Four films?

Love and Thunder will undoubtedly have connections to other Phase Four movies. As the first film after Doctor Strange: Multiverse of Madness, maybe Love and Thunder explores an alternate universe in the multiverse where Lady Thor assumes the mantle and wields Mjolnir? Maybe that version of the character migrates over into the main MCU universe? Additionally, no matter in what capacity the Guardians of the Galaxy appear, it would make sense for at least some of Love and Thunder to connect with the upcoming Guardians of the Galaxy Vol. 3, set to release in May 2023.

As Thor, it seems likely that Jane will eventually join the various other heroes for Avengers 5 since her role in the MCU will dramatically shift as she takes on the mantle of Thor (it can’t be a one-and-done gig, right?).

There will also likely be plenty of Easter eggs spread out throughout the film, as well as a post-credits scene — both very typical of an MCU joint — to tie Love and Thunder to other Phase Four films.

This article was originally published on July 22, 2019