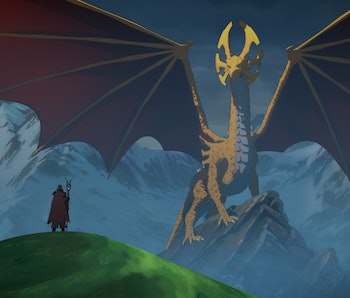 This article about Season 3 of the animated series Dragon Prince was originally published on September 20, 2019 and updated on June 5, 2021 following the release of the season on Netflix. Read on for the original article, with some new changes to reflect the latest updates on this topic.

The Dragon Prince Season 3 is here! After Wonderstorm, the studio behind Netflix’s hit fantasy cartoon series, confirmed the renewal at a WonderCon panel in March 2019, the adventures of Callum, Rayla, Ezran, and the rest of the gang continued in November.

Here’s everything we know about Dragon Prince Season 3’s release date, cast, and plot based on Inverse’s previous interviews with the show’s creators, the recent SDCC panel, and more.

When was The Dragon Prince Season 3 release date?

The Dragon Prince Season 3 was released on November 22, 2019. Like the seasons before it, it consisted of nine episodes, which dropped all simultaneously.

Is there a trailer for The Dragon Prince Season 3?

Yes! The creators whetted fans’ appetites at San Diego Comic-Con 2019 when they screened a scene.

The official trailer was released in early November 2019, just a few weeks before the season aired.

What’s the plot of The Dragon Prince Season 3?

Here’s the official plot synopsis for The Dragon Prince Season 3, according to Netflix:

The new season opens as Callum and Rayla finally enter the magical land of Xadia, and begin the last and most dangerous leg of their journey to reunite Zym with his mother, The Dragon Queen. Meanwhile, Ezran returns to the kingdom of Katolis to take his place on the throne, only to be immediately pressured to go to war with Xadia. Lord Viren, who is imprisoned and desperate, begins to realize the power of his new ally – the mysterious Startouch elf, Aaravos.

In season three the series will reach its most epic heights yet. We will discover the wonders of Xadia, encounter heroes, old and new, and learn some previously untold history about how Zym ended up on this epic journey. Season three will introduce new iconic characters – good, evil, and of course layered and complicated. Long-held beliefs will be challenged, new magic will lead to incredible powers, and a momentous battle will be waged in the name of finally stopping a centuries-old conflict that has affected generations.

Was The Dragon Prince renewed for Season 4?

Yes, and many more! In July 2020, Netflix announced that The Dragon Prince was renewed for four additional seasons of nine episodes each. That should take the gang through seven seasons, at least!

The Dragon Prince Seasons 1-3 are streaming now on Netflix.

More like this
Entertainment
8.11.2022 2:00 PM
The Midnight Gospel creator has “no hard feelings” over Netflix cancellation
By Jake Kleinman
Entertainment
8.4.2022 7:00 AM
The Sandman release date, time, plot, cast, and trailer for Netflix's dark fantasy series
By Jeff Spry
Culture
8.5.2022 10:30 AM
How Netflix's epic Sandman finale sets up Season 2
By Mónica Marie Zorrilla