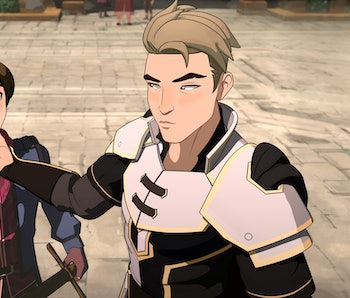 This article about Season 2 of the animated series Dragon Prince was originally published on November 16, 2018 and updated on April 19, 2021 following the release of the season on Netflix. Read on for the original article, with some new changes to reflect the latest updates on this topic.

The Dragon Prince landed on Netflix in 2018, and became an instant hit, generating loads of fan art and a passionate community eager to dive into this new fantasy world from some of the minds behind Avatar: The Last Airbender. The show’s first season lasts for just nine episodes, so there’s a pretty good chance you’ve already binged through it. Luckily, there’s more where that came from in the show’s second season

Here’s everything we know about The Dragon Prince Season 2, including release date, plot, and the video game adaptation currently in development.

How did The Dragon Prince get a Season 2?

During a panel at New York Comic Con, the creators of Dragon Prince revealed that the show had been picked up by Netflix for a second season. The news was shared on Twitter with a special image that revealed a 2019 launch for Season 2 — and also featured at least one glaring plot hole.

As you can see in the image above, which sets up a magical confrontation between Callum and Claudia, the prince is clearly holding the magic orb from Season 1. That’s the same orb he smashed in the final episode.

When was The Dragon Prince Season 2 release date?

The Dragon Prince Season 2 released on Netflix on February 15, 2019. All nine episodes of the season released at the same time, much like they did in Season 1.

What do we know about The Dragon Prince video game?

Wonderstorm is also working on a video game that takes place in the same world as Dragon Prince. This should give fans of the new series another way to explore its fantastical word, but, again, we don’t really know what it’s actually coming out.

In an interview with Inverse, Wonderstorm co-founder Justin Richmond (who directed Uncharted 3) made it clear that fans shouldn’t expect an Uncharted-style video game.

“It’s specifically not like Uncharted,” Richmond said. “It’s not a huge narrative based game. I can’t talk too much specifics but it’s not like that.”

In an interview with Polygon, Richmond offered a bit more detail, confirming that the game will tell its own story in the Dragon Prince universe and will be developed in-house by Wonderstorm.

“It’s very different from that, but it does connect very deeply to the world and characters of The Dragon Prince and there’ll be things in the game that hugely expand upon the lore of our world. So it’s not a companion piece. It’s not a licensed game. It’s a fully fledged piece of The Dragon Prince world that you will get to see through a different lens.”

As for a release date, that much is still unclear. In a Reddit AMA, the company said that the video game is still in development, promising a “deep, engaging” experience” when the launch finally arrives.

What is the plot of The Dragon Prince Season 2?

Season 2 of The Dragon Prince was a big one for heroes and villains alike. Viren, the King’s evil advisor who wants to take the throne for himself, attempted to bring together the human kingdoms to carry out military action against the elves. Callum strikes up a fledgling romance with Claudia. And though he initially rebuffs her offer to teach him dark magic, he eventually uses it to help free an imprisoned dragon, sending him into a series of fever dreams that allows him to reconnect with his sky magic.

Ezran reconciles with the death of his father, which he finds out about via Claudia. He decides to not only assume his responsibility as king of Katolis, but also reveal his hidden talent of speaking with animals. Rayla has less of a role to play in Season 2 than the brothers, but is with Callym and Zym at the end of Season 2 when their quest to get to Xadia is blocked by the ancient dragon Sol Regem.

Meanwhile, Viren continues his plotting and scheming throughout Season 2. He attempts to bring all the human kingdoms together to take down the elves. In the process, he recounts many tales of the past, but is still met with refusal. The council has Viren arrested at the end of the season, but not before creating shadow creatures alongside the elf Aaravos to help scare the other kingdoms into an alliance.

Did the animation improve in The Dragon Prince Season 2?

The animation style of The Dragon Prince, which features computer-created characters against hand-drawn backgrounds, drew early criticism from Avatar fans who were hoping for a spiritual successor in terms of both story depth and visuals. The design actually grows on you pretty quickly, but it looks like Wonderstorm could try to course-correct in Season 2.

Speaking to [The Verge], series creator Aaron Ehasz admitted that relying on computer animation does come with some limitations, and said that Season 2 will hopefully offer some visual improvements.

>” It’s definitely something that, in the future, if-slash-when we’re making more episodes, we’re not gonna be able to vastly change how we make it, but we’re definitely gonna have an eye toward specific shots and scenes. Can we make them more fluid? Can we make them exceed the expectations that were set?”

Was The Dragon Prince renewed for Season 3?

Yes! Season 3 of The Dragon Prince, subtitled “Sun,” premiered with nine episodes on Netflix on November 22, 2019. It aired only nine months after Season 2.

Season 2 of The Dragon Prince premiered on February 15, 2019 on Netflix.