“It was fulfilling to create female and diverse characters.” 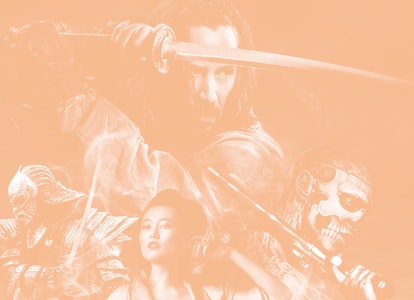 Aimee Garcia spent years looking for herself in the world of superheroes. Now, she’s writing them into worlds of her own creation.

The star of Marvel’s M.O.D.O.K., streaming May 21 on Hulu, tells Inverse that she’ll next harness her love of superheroes and comic books to expand one promising franchise that got off to a particularly rocky start: 47 Ronin.

“Hopefully, they discover new stars” – Alongside her creative partner A.J. Mendez, a former WWE star-turned-author, Garcia has scripted a sequel to the famously troubled samurai fantasy epic, which starred Keanu Reeves and hit theaters in 2013. In a recent interview with Inverse, Garcia pulled back the curtain on her 47 Ronin follow-up to reveal its thrillingly diverse ensemble of heroes.

“We just wrote the sequel to 47 Ronin,” Garcia says. “It was fulfilling to create female and diverse characters. A.J. and I wrote two strong female leads. Now they’re casting a Latina and a Japanese [actress]. Our other lead is Black. Hopefully, they discover new stars.”

“We’re writing stories we didn’t have as kids.”

For Garcia, working on a franchise project that prioritized diversity so directly couldn’t have felt more important. “I got chills,” she says. “We’re writing stories we didn’t have as kids. We’re writing for the next generation. They’re going to find badass actors who are going to kick butt in the samurai world.”

Best known as an actress on shows like Lucifer (where she plays forensic scientist Ella Lopez), Garcia has taken up writing with Mendez on comic books like G.L.O.W. and Dungeons & Dragons: At the Spine of the World, in addition to an untitled, upcoming original story. But it was a massive leap forward for her career as a screenwriter when Deadline reported in April that Garcia and Mendez had signed on to co-write the sequel to 47 Ronin, marking their feature writing debut.

Initially released in 2013, 47 Ronin was a dark fantasy epic, inspired by real-life samurai in 18th-century Japan but also populated by witches, giants, and mythical swordsmen. Despite ultimately grossing $155 million worldwide, the film’s hefty budget and (then-dashed) franchise hopes ensured it was remembered as a box-office bomb. But in approaching a sequel, Garcia and Mendez aim to put their own stamp on the 47 Ronin universe — by penning a sequel set in a far future with influences ranging from martial arts to cyberpunk to horror.

A Scrappy Heart – As Latina women, Garcia and Mendez bonded over rarely seeing characters who looked like them in their favorite comics and genre films. A Chicago-born actress with Puerto Rican and Mexican heritage, Garcia has been a lifelong Marvel fan; her favorite heroes include Spider-Man, Venom, Deadpool, and Guardians of the Galaxy – “before it was a movie,” she’s sure to add.

“We started having conversations [about] growing up and being like, ‘Did people look like you in TV?’” she says. When both Garcia and Mendez agreed neither of them had been offered role models they could relate to, and that diverse future generations of genre fans deserved better, the two started a company, Scrappy Heart, and started writing.

Garcia was further encouraged to write when she met fans at Comic-Con who’d dressed in scientist regalia to cosplay as her Lucifer character. “Going to Comic-Cons, [I’d see] fans cherry-pick for representation,” Garcia says.

“I found it sweet fans would dress like a scientist – which is something they can be,” she says. “We’ll never become Spider-Man. He’s aspirational, but I’ll never climb on the ceiling. So we wanted to create characters we never saw growing up. We’re writing films and TV we’re hoping can be the next Lucifer or Supernatural.”

I “won the lottery” – While the sequel to 47 Ronin is currently cooking, Garcia still has Marvel’s M.O.D.O.K to promote. “I loved it,” she raves, eagerly discussing her arrival in the Marvel multiverse.

“I had never seen a supervillain take out the garbage or pay taxes,” she says. “This is a one-of-a-kind show, where you see the supervillain hungover with hair messed up.”

M.O.D.O.K., in other words, didn’t glamorize its antihero – though he does a pretty great job of that all by himself. “That’s what appealed to me about this character not a lot of people knew about: this guy who has the smallest arms and legs, and the biggest head, thinks he’s the greatest thing since sliced bread,” she says. “I found him inspirational because he is so confident. You can knock M.O.D.O.K. down and he’ll float right back up.”

Her character of Jodie is a Latin-American woman, pressured to play up a heritage she doesn’t quite identify with in order to succeed. Playing a character written with that identity in a Marvel series, Garcia said she feels she “won the lottery.”

“I have to credit Jordan [Blum] and Patton [Oswalt],” Garcia says. “Not only are we multicultural, we’re multibionic. It’s reflective of the world we’re in, and the world we might be in. We might all be bionic in a hundred years. Even though the show has aliens and Avengers, it really deals with issues like divorce and identity. To originate a Latina in the Marvel universe is a dream come true.”

But M.O.D.O.K. is also a reminder to Garcia that what she wants to do next could be even more seismic. “I hope to create with [Mendez] the change we want to see,” says the actress – though she already has plenty of reasons to feel triumphant.