You Need to Watch the Weirdest Cyberpunk Movie

“Who ordered the pizza?” 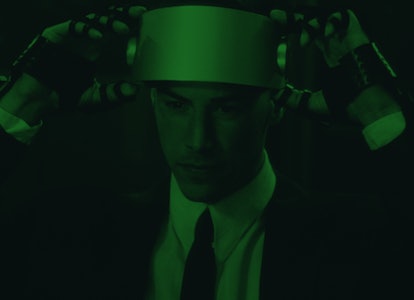 Four years before Keanu Reeves boggled minds with The Matrix, the once and future Neo entered cyberspace as Johnny Mnemonic.

If you’re wondering who the hell that is? Fair enough, even though one could argue the rightfully named Johnny Mnemonic is the most iconic cyberpunk movie of all time. But beyond its place in that specific subgenre, there’s another reason you need to check out director Robert Longo’s 1995 movie: it’s Keanu Reeves’ most underrated science fiction movie, and potentially even his weirdest — which is really saying something, given the Reeves oeuvre.

Set in 2021, the world of Johnny Mnemonic is controlled by megacorporations via the internet, with a pandemic ravaging the world. For everything else the film gets wrong about 2021, at least it gets that part right. Reeves plays Johnny, a mnemonic courier, transporting sensitive corporate data for mega corporations via a brain implant that allows him to store data at the cost of his memories.

While getting a new data package uploaded into his brain in Beijing, the scientists doing the transfer are killed before completing the job. Johnny is forced to go on the run with the partial data package in his head while being pursued by the Yakuza and the Pharmakom company, overseen by mogul Takahanshi (Kitano). Alliances with cyborgs and encounters with assassins ensue, all with Reeves’ signature “whoa” aesthetic driving the way.

As you can see, the very attempt of summarizing Johnny Mnemonic for the uninitiated requires evoking Bill Hader’s best SNL character: “This movie has everything.” It has Keanu Reeves yelling his lines. It has Dolph Lundgren as a street-preaching assassin, Udo Kier licking faces, Henry Rollins running a clinic that installs cybernetic implants, Ice-T playing a character named J-Bone, a cyborg Dina Meyer, Takeshi Kitano giving one hundred percent in his performance, and a cyberspace hacking dolphin named Jones.

I repeat: a cyberspace hacking dolphin named Jones. And did I mention Dolph Lundgren as a street-preaching assassin? Oh, I did? Can’t hurt to mention it again.

Among other things, Johnny Mnemonic is a lot. And not all of it works. But in terms of pure spectacle, Keanu Reeves, Ice-T, and Dina Meyer facing off against a Yakuza boss (Denis Akiyama) equipped with a laser garotte, all while ‘80s action icon Lundgren dresses up as a Biblical shepherd, is just nutty enough to make for an entertaining evening, not to mention a very surreal Reeves experience even by Reeves’ standards.

Johnny Mnemonic is by no means a beloved classic and barely even has cult status, but there is something weirdly appealing about its trip through a digital frontier not yet fully understood by Hollywood or the audiences they tried to sell the film to. It’s a mess of ideas and tones, but it’s a mess with vision, and one that stars Keanu Reeves — which means it’s worth your time.

Johnny Mnemonic is currently streaming for free on Tubi.