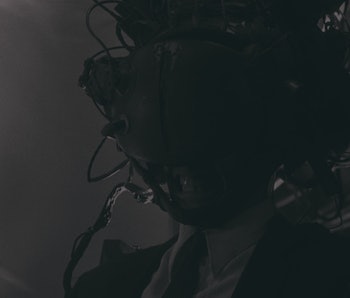 In 1995, cyberpunk legend William Gibson wanted to adapt one of his short stories into a low-budget art film. The result was a big-budget mainstream Hollywood movie, that, 26 years later, actually feels like a low-budget art film. Although Gibson and several other serious critics have distanced themselves from it, this early cyberpunk movie is much better than its reputation.

Watching Johnny Mnemonic in 2021 is unsettling, — and not just because the movie opens with the text “The Internet 2021” on the screen — it’s unsettling because it's an accidental piece of legitimate science fiction art that feels tragically overlooked and urgently prescient.

If you can accept that a certain level of trashiness and corniness was part and parcel of a huge percentage of mainstream science fiction movies well into the mid-’90s, then watching Johnny Mnemonic for its bravery will be easy. What will be hard is to convince yourself is what you’ve been told so many times, that this is supposed a bad movie.

Starring Reeves as the titular “Johnny,” the movie (as well as the short story on which it’s based) focuses on a data courier who moves information via a cybernetic implant. In the movie, this means “Johnny” has traded his childhood memories for more data storage.

This plot device seems to seriously underestimate the storage capacity of the actual human mind but also creates a kind of reverse Blade Runner plot. In that cyberpunk world, you had Replicants who were gifted fake childhood memories to make them more complete people. In Johnny Mnemonic, you’ve got a human guy who wants to be less machine-like by getting his childhood back. In both cases, you’ve got perpetual psychological adulthood through science-fictional means. And the underlying message there is pretty much the same: If the technology takes away childhood (or fails to manufacture it) then everybody is super depressed.

The film version of Johnny Mnemonic also presents a technologically inflicted pandemic, in the form of the fictional affliction “NAS” or nerve attenuation syndrome. The long and short of this is that big tech companies know that too much time in cyberspace is bad for you, but they let it happen because it makes them more money. On top of this, these big tech companies are also in conclusion with pharmaceutical companies to withhold the cure to NAS.

Even if we’re missing a one-for-one allegory with anything happening in the real 2021, the vague outline of tech companies run amok with power amid a global pandemic should give you pause. In The Matrix, humanity is enslaved by malevolent AI, but in Johnny Mnemonic, the enemy is, appropriately, corporations who control data, and thus, control the world. This is a little reductive now and in 1995 was probably a little too abstract.

The point is, the context for Johnny Mnemonic feels more like a funhouse mirror version of 2021 rather than being absurdly wrong.

For the Gibson purists, Johnny Mnemonic feels like it scratches the surface of the complex world he created in his “Sprawl Trilogy,” the book series that started with the unbeatable novel Neuromancer. In fact, in the short story version of Johnny Mnemonic, the protagonist isn’t really Johnny, but instead, Molly Millions, a major character in Neuromancer.

In the film, Molly is called Jane, played by a pre-Starship Troopers Dina Meyer. In several ways, cool things about Molly from the prose are transmuted to Reeves’ Johnny for the film. It's obviously sexist and shortsighted, but in the Gibson version, Molly eventually reveals in Neuromancer that Johnny was killed. In the larger world of those Gibson stories and novels, Johnny is a footnote, but here, he’s the entire story. That said, if anyone in the ‘90s had ever attempted to do a true adaptation of Neuromancer, Dina Meyers would have been essential. If Reeves’ performance ever gets a little too much in this movie, Meyers actually sells you on the reality of it all.

Even viewed through a ‘90s cyber-hangover, Johnny Mnemonic pretty much works. Just like Johnny has downloaded more data than his implant can handle, the film version of Johnny Mnemonic couldn’t ever truly hit its full potential. But when you watch the movie now, you can see that potential and prescience bubbling under the surface. Not all science fiction movies that are ahead of their time are masterpieces or perfect. In fact, just the opposite. In the best cases, science fiction movies are a laboratory for new kinds of pop narratives. Johnny Mnemonic might be a failed experiment, but that doesn’t mean you can’t still learn something from it.

Johnny Mnemonic is streaming for free (with ads) on PlutoTV and Tubi.

More like this
Entertainment
6.25.2022 11:30 AM
40 years ago, Harrison Ford's biggest sci-fi flop inspired a cyberpunk revolution
By Ryan Britt
Entertainment
6.30.2022 5:01 PM
Everything we know about Dune: Part Two
By Gabrielle Bondi and Ryan Britt
Culture
6.29.2022 11:30 AM
You need to watch the most subversive sci-fi love story on Netflix before it leaves this week
By Alex Welch
Related Tags
Share: