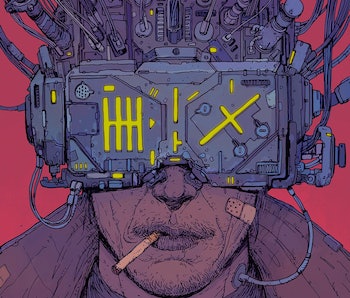 The bizarre Tide Pod challenge is a trend seemingly born out of nowhere. Which is exactly why it feels like a sci-fi event that would fit in neatly to a science fiction world. Decades before the internet existed as we know it, William Gibson’s prescient science fiction cyberpunk novel Neuromancer presented a complet future world, one that out-blade runners Blade Runner with ease. But, one fascinating aspect of the book was what it had to say about fads and the speed at which they would exist in the future. Now, as young people are willingly swallowing laundry detergent, it feels like one aspect of Gibson’s science fiction vision has come true.

If we want to know the future of the next “forbidden snack,” we could easily check out a handy subreddit on the subject, but if we want to know how these kinds of fads will feel like for people too old to understand them, we can look to Gibson’s writing. In Neuromancer, the cyber-cowboy character of Case is constantly commenting on the speed at which trends (we’d call them memes now) exist and are gone. In the early pages of Neuromancer he describes it like this.

[It was] something new, something that had come in since he’d been in Chiba. Fads swept the young of the Sprawl at the speed of light; entire subcultures could rise overnight, thrive for a dozen weeks, and then vanish utterly.

Obviously, this observation isn’t limited just to a fad of teens eating laundry detergent, but demonstrates a way in which Gibson accidentally predicted viral memes in general. The author himself even compared false alien abductions to “memes” in 2016.

What’s somewhat unique about the Tide Pod trend isn’t just that it’s an internet subculture that seemingly rose overnight, but more importantly, it isn’t limited to the confines of the internet. People have to actually eat the Tide Pods to be part of it. In Neuromancer, the Sprawl is a physical place, even though a lot of action in this book (as well as Burning Chrome and Mona Lisa Overdrive) take place in cyberspace. What happens in cyberspace effects the fads of the real world.

In Neuromancer, the character of Case is occasionally horrified by the various implants or bizarre elective surgeries people younger than him are sporting. In this world, seeing a teen who willing has large animal canine implants isn’t that strange. And if someone did get special fang-like tooth implants today, it would make perfect sense. Those super-sharp teeth would probably help them bite into some Tide Pods all the more easily.

More like this
Entertainment
Jan. 13, 2023
Foundation Season 2 could fix the worst thing about the Isaac Asimov books
By Ryan Britt
Entertainment
Jan. 23, 2023
Animalia is an alien invasion movie with metaphysical dreams
By Andy Crump
Culture
Jan. 20, 2023
Why The Lost World is better than all the other Jurassic Park sequels combined
By Ryan Britt
LEARN SOMETHING NEW EVERY DAY.
Related Tags
Share: