'M.O.D.O.K.' showrunner reveals how an MCU crossover could happen

“We are canonically part of the Marvel multiverse.” 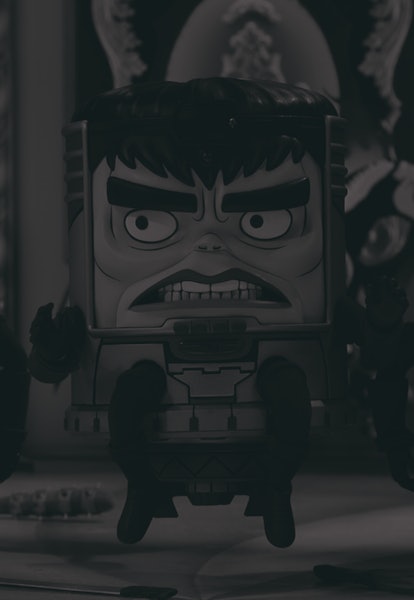 “I was hoping that putting them in the show would give us free tickets,” Blum tells Inverse.

He hasn’t heard back from the musical geniuses behind “Semi-Charmed Life” yet, but he understands a pandemic put the brakes on touring. “I met my wife in college, and we have music you hear and you’re like, ‘That reminds me of our history.’ That’s what we wanted to do with M.O.D.O.K.”

M.O.D.O.K. was co-created by Blum and comedian Patton Oswalt, who voices the Marvel anti-hero and whose name stands for “Mobile Organism Designed Only for Killing.” Independent from the Marvel Cinematic Universe, the claymation series follows the classic Avengers villain from the minds of Jack Kirby and Stan Lee as he seeks to take back control of A.I.M. (“Advanced Idea Mechanics”) and repair his marriage to his wife, Jodie (voiced by Aimee Garcia).

“I’ve always loved the Marvel oddities,” says Blum, a lifelong comic book reader. “I love M.O.D.O.K., this ego-driven, giant floating head with baby arms and legs. He wants to take over the world but he’s riddled with insecurities. I find that relatable. That Jack Kirby design is incredible, it’s stuck with me the first time I saw him in the Iron Man cartoons.”

Premiering May 21 on Hulu (not Disney+), M.O.D.O.K. isn't technically part of the Marvel Cinematic Universe. At least not yet.

“Our show was given its own numbered reality,” Blum says. “We are Earth-1226, which is my son’s birthday. We are canonically part of the Marvel multiverse, and it’s up to them if they want to bridge us or not.”

With movies like Spider-Man: No Way Home and Doctor Strange in the Multiverse of Madness set to bring multiverse theory to the MCU, it may only be a matter of time before Oswalt’s killer mobile organism finds a way into that universe as well. Until then, MODOK is a worthy distraction from the Avengers and their antics.

In an interview with Inverse, Blum explains what makes M.O.D.O.K. tick, his view into the Marvel machine as a TV showrunner, and more.

Both you and Patton Oswalt say M.O.D.O.K. pays tribute to Jack Kirby. But how does an adult animated show about time traveling to a Third Eye Blind concert feel like a Jack Kirby show?

Jack Kirby is known for creating the best Marvel monsters and humanizing them. It’s across all his creations. We wanted to do that with this show: Take this ridiculous character and ground him. Make you care about him. That’s all there in the initial stories from Tales of Suspense. Kirby’s imagination was limitless, and we lean into that.

It’s Kirby’s art, too. That comes out [in our show] in the physical puppets we’ve created. We made sure A.I.M. looked like A.I.M., the beekeepers look like the beekeepers. We spent hours with the effects guys making sure there was Kirby Krackle in the logo. That’s where a lot of Kirby came out.

“It was like making a live-action show more than an animated show.”

How does the stop-motion clay puppetry of M.O.D.O.K. inform or enhance the show’s tone?

This was outside my comfort zone. I had come up in 2D animation. But I remember seeing Into the Spider-Verse at the time we were deciding the look of the show, and I loved [the idea of] doing something different. I had seen a test for M.O.D.O.K. and it blew me away, how glossy and beautiful it was. It looked like Laika.

They [Stoopid Buddy Stoodios] were upfront, “We don’t want this to look like Robot Chicken.” They developed this technology to do motion-controlled cameras and create handheld in stop-motion, which is crazy. Handheld was perfect for the story we’re telling. This is the behind-the-scenes of a supervillain at home. That vérité feel makes you think of The Office or Modern Family, a sitcom element to our show that’s cinematic and big. It was like making a live-action show more than an animated show.

Patton Oswalt is very much the voice of M.O.D.O.K., figuratively and literally. What is Oswalt like as a collaborator?

He stayed in character the entire time so he’s an absolute asshole. [Laughs] No, he’s the best. He was a comedy hero of mine before I met him. He is what you want him to be. He is that genuine, caring, nerdy guy who knows his shit. He and I are at the comics store every Wednesday, that’s where I’d see him before we got to working together. You can say “Kirby Krackle” and he would know what you’re talking about immediately.

It was invaluable having him in the writer’s room. You would pitch a line or he would pitch as M.O.D.O.K. and you’d go, “That’s it, that’s how M.O.D.O.K. would say it.” It was having M.O.D.O.K. in the room with you. He makes him real, which is a hard thing to do.

Minor spoilers here, but the show makes a very obscure Grant Morrison creation as the main antagonists. (Writer’s note: For spoilers, dig up Marvel Boy #3 from 2000.) How did you find these characters, who’ve only ever appeared in one single comic book?

We’re Grant Morrison fanatics. Grant Morrison is as good as it gets. We thought it was a brilliant concept and made sense for what the show was going to be. There’s a lot of that with this show. We have the Marvel handbooks in the writer’s room. We pull characters people are barely familiar. Sometimes we build a story around a character.

Did the cancellation of The Offenders and the other shows in the shared universe influence any changes in M.O.D.O.K?

Not at all. M.O.D.O.K was first and completely written. We were in production when those changes started to happen. Everyone set out to tell their story and wasn’t worried about how they would connect later. There was nothing to undo when those got canceled. I’ve seen some of Hit-Monkey, it’s going to be incredible. I’m glad that’s going to be out there. We were happy to get our show, and Marvel has been happy. I mourn the shows but I’m excited for people to see ours.

With M.O.D.O.K. being part of Marvel Studios, do you hope for a crossover with the MCU?

I would love that. That’s fun. Patton and I wrote a comic called M.O.D.O.K.: Head Games, which addresses that a little. Our show was given its own numbered reality: We are Earth-1226, which is my son’s birthday. We are canonically part of the Marvel multiverse, and it’s up to them if they want to bridge us or not.

“We are canonically part of the Marvel multiverse, and it’s up to them if they want to bridge us or not.”

I love the second episode’s premise, which is about M.O.D.O.K. taking Jodie to a Third Eye Blind concert they missed in college. Did you miss a concert when you were in your early twenties?

They are a band I’ve always wanted to see. The specificity of that band and time was meant to create history between M.O.D.O.K. and Jodie. This was a real relationship. You watch the pilot and you’re like, “How doe she marry this guy?” Episode 2 answers that. These people fell in love and have a life together. We were lucky to have Aimee Mann do a cover [of “Never Let You Go”]. She recorded it for the show. That is important to people. It is the background music of your life.

Please tell me Aimee Mann’s cover is coming to Spotify.

They haven’t announced it yet but there is a full soundtrack of the score, as well as Aimee’s song. It is coming. You will be able to listen to everything that’s been on M.O.D.O.K.

M.O.D.O.K joins a crowding scene of adult animated superhero shows like Invincible and Harley Quinn. What is it about adult animation that represents a new frontier for superhero stories?

Superheroes are a giant genre. The excitement of adult animation is that it’s a very specific kind of comedy. It frees you to explore the Marvel Universe in this lens we haven’t seen yet. I’m actually friends with Patrick Schumacker who runs Harley Quinn. We’re in a comic book reading club. We’re fans of each other’s stuff. I’ve just started Invincible and it’s awesome. All these shows have their own personalities. You can categorize them similarly, but Invincible is different from Harley Quinn, and we’re different as well. We co-exist and have our point of view.

I see on Twitter participating in speculation of Marvel movies and shows like other fans. But not everyone works as a Marvel showrunner. What view do you have into the Marvel Universe?

They don’t tell me shit. No way. Are you kidding me? I can barely keep secrets from my own show. I watch as a fan. When people are like, “M.O.D.O.K. may show up in Falcon and Winter Soldier,” I’m like, I hope! I was a fan first and I will be a fan until the day I die. This was never work for me.