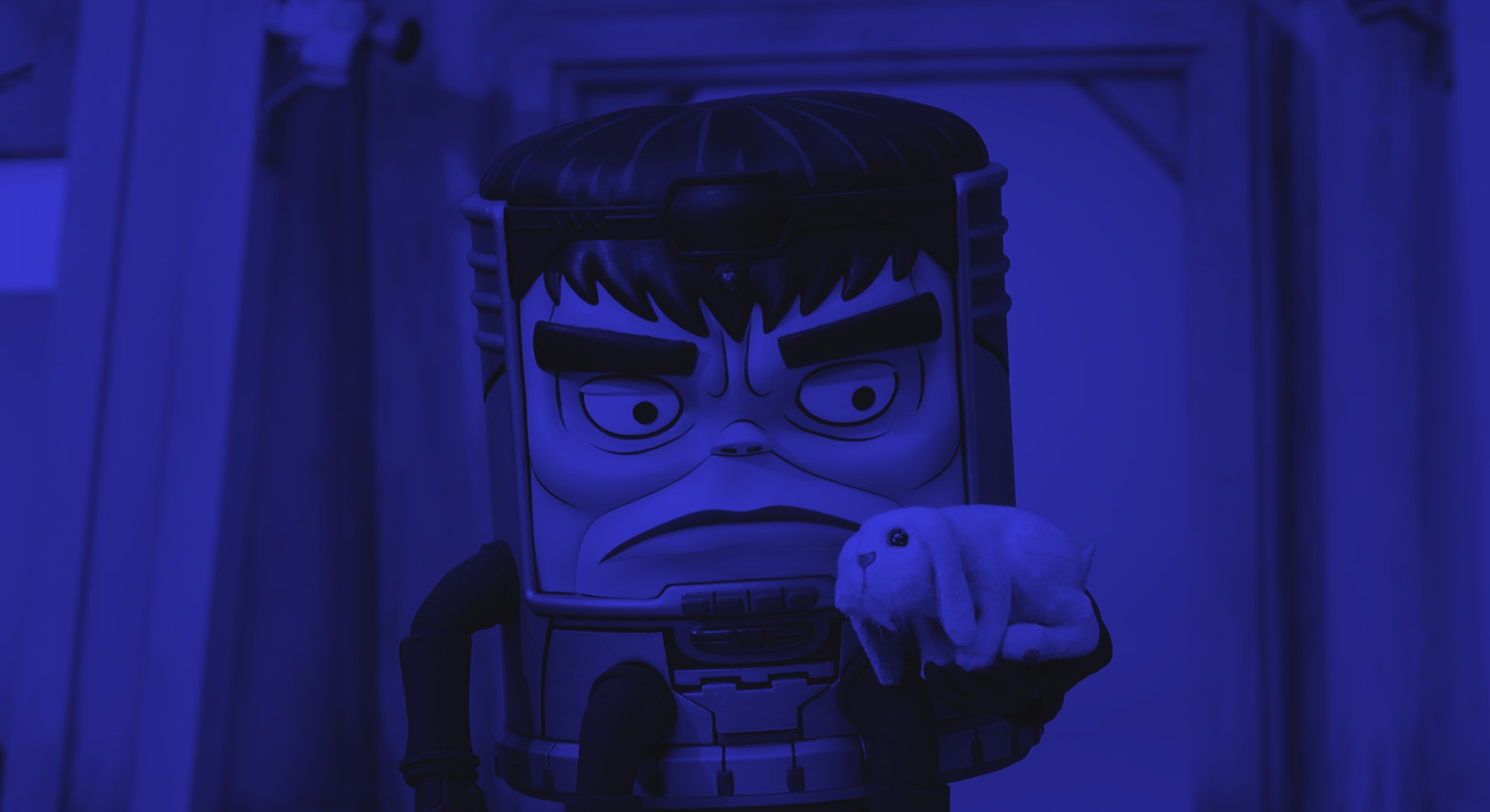 Patton Oswalt and M.O.D.O.K. have one thing in common: They both enjoy a good sit.

Away from the Marvel Cinematic Universe, the lesser-known Marvel supervillain stars in his own adult-oriented clay animation series M.O.D.O.K., streaming May 21 on Hulu. Patton, the celebrated comedian and noted geek who once pitched his own Marvel/Star Wars crossover in a Parks & Recreation filibuster, lends his voice to the maniacal M.O.D.O.K. (“Mobile Organism Designed Only for Killing,” in case you were wondering.)

But should the gold-plated M.O.D.O.K. ever jump to the silver screen, Oswalt would be more than happy to take on that role too.

“Any role you get to sit in a chair, are you kidding me?” Oswalt tells Inverse. “You just take this face and computer wide it out, and let me sit and eat a snack and yell my lines? Couldn’t be happier.”

Of all the Marvel villains to get their own show, M.O.D.O.K. is far down the list of candidates. But Oswalt and producer Jordan Blum saw sitcom potential in Jack Kirby and Stan Lee’s weirdest comic book creation. Underneath his oversized head and widdle arms and legs, there is a heart.

“I fell in love with the fact that he is just as angry and resentful of the other villains as he is the heroes,” Oswalt says over Zoom. “He is an eighth-dimensional brain who has been relegated to the very bottom of the supervillain pecking order. He is so angry. That envy and competitiveness and pettiness feels so human, and in a weird way, kind of lovable.”

In M.O.D.O.K., Oswalt’s mastermind loses control of his sinister organization A.I.M. (“Advanced Idea Mechanics,” again, in case you were wondering) to a disruptive tech billionaire. Between that and a heartbreaking divorce, the series follows M.O.D.O.K. scheming to take back control of A.I.M. and win back his family to become a villain worthy of ruling the world.

In an interview with Inverse, Oswalt reveals how M.O.D.O.K. pays tribute to the late comic book legend Jack Kirby, what playing in the Marvel Universe means after the deeply personal and difficult HBO series I’ll Be Gone in the Dark, and the even more obscure Marvel villain behind the show’s machinations.

What do you see in M.O.D.O.K. that other comic book readers don’t?

He’s so angry. Yes, he wants to take over the world and be Emperor M.O.D.O.K., but can’t you respect me while I’m doing it? There is no chill. His face is gigantic. Everything is a billboard to him, he can’t ever be subtle. He’s had to adjust his life to that. There’s something lovable about that.

You and Jordan Blum have said the series pays homage to Jack Kirby. I admit, I can’t imagine Jack Kirby writing about time traveling to a Third Eye Blind concert. How does M.O.D.O.K. pay tribute to Jack Kirby?

Kirby’s thing was huge, cosmic, consequential things and godlike powers, but in the hands of mankind. [Who are] inherently flawed, frightened, jealous, insecure. That’s where you get huge conflicts. That’s where, “With great power comes great responsibility” comes from. If you notice, Kirby’s villains are people with great power but take no responsibility. We wanted to lean into that idea. All the adventures in the episodes are really huge. Reality is at stake sometimes, that’s how huge they are. But always motivated by the pettiest, most personal thing. Also the fact it’s 3D animated. We looked at different animators and 2D options. But we felt Kirby would say, “This has gotta be 3D.” It’s gotta be moving with depth. He would want that. So even the look of it felt Kirby-esque to us.

M.O.D.O.K. was announced with other Marvel shows on Hulu that would have led to a multi-series crossover called The Offenders. That’s not happening anymore. Did that change influence anything about the story or creative direction of M.O.D.O.K.?

If it affected the show, I don’t know about it. We were focused on getting the episodes out. Especially since it’s stop motion, which takes so much more time and is so much more labor intensive. I wasn’t aware of that stuff. I couldn’t. I didn’t have the energy or the time to do so.

Spoiler alert, but one of the coolest things about M.O.D.O.K. is that the villains are a super obscure creation of Grant Morrison. (Hint: Look for Marvel Boy #3, published in 2000.) How and why did you use them?

You just answered the question. We wanted the most obscure thing. But that’s nothing new. A lot of comic creators look for someone that’s been overlooked or not seen as a huge threat, and try to retcon them into something amazing. The way Alan Moore did with Floronic Man on Swamp Thing. You can make somebody a player if you write them well.

You started work on M.O.D.O.K about a year after you produced the HBO series I’ll Be Gone in the Dark, based on your late wife Michelle McNamara’s book about the Golden State Killer. What was it like to have something as colorful as M.O.D.O.K. after something so personal and difficult?

For me, it was a relief. I needed to come out. I’ve been so sunk in that darkness and despair that to come out and play in the Marvel toy box, and do it in such a goofy way, it was a life-saver. Even some of the Marvel movies and TV shows can get dark and deep. So this was really fun. Even the deep moments are motivated by the silliest stuff. I needed it.

One key moment in M.O.D.O.K. is lifted right out of your own life. In your stand-up special Annihilation, you joked about visiting your late wife’s grave and finding an awkwardly busy graveyard. How did you bring that moment into this series?

We were looking for moments that people watching can go, “Oh, I’ve done that” or “I could imagine that.” Clumsy, real life intruding on what should be epic, portentous moments is always great comedy. Also, in a weird way, it felt life-affirming. I remember when I went to visit my wife’s grave and that family was blaring that music, there was something affirming. Life is still happening. Even though it looks clumsy and weird, it actually made me feel better.

There will come a day when M.O.D.O.K. is in the Marvel Cinematic Universe. Is reprising the role on the big screen interesting to you?

Yes! Because you get to sit down the whole time, which is fantastic. I’m in. Look, if they end up going with some massive star, I totally get it. But I think I would make a damn good M.O.D.O.K. Couldn’t be happier.

Left turn here, but TikTokers spent 2020 developing the crowdsourced Ratatouille the Musical. Would you want to star in an actual stage production of that too?

Seeing it would interest me. I’m not a good singer, they need somebody with amazing pipes to play the main guy. But I would love to see it done. I thought the songs on TikTok were delightful. A show can come from anything. You don’t know.