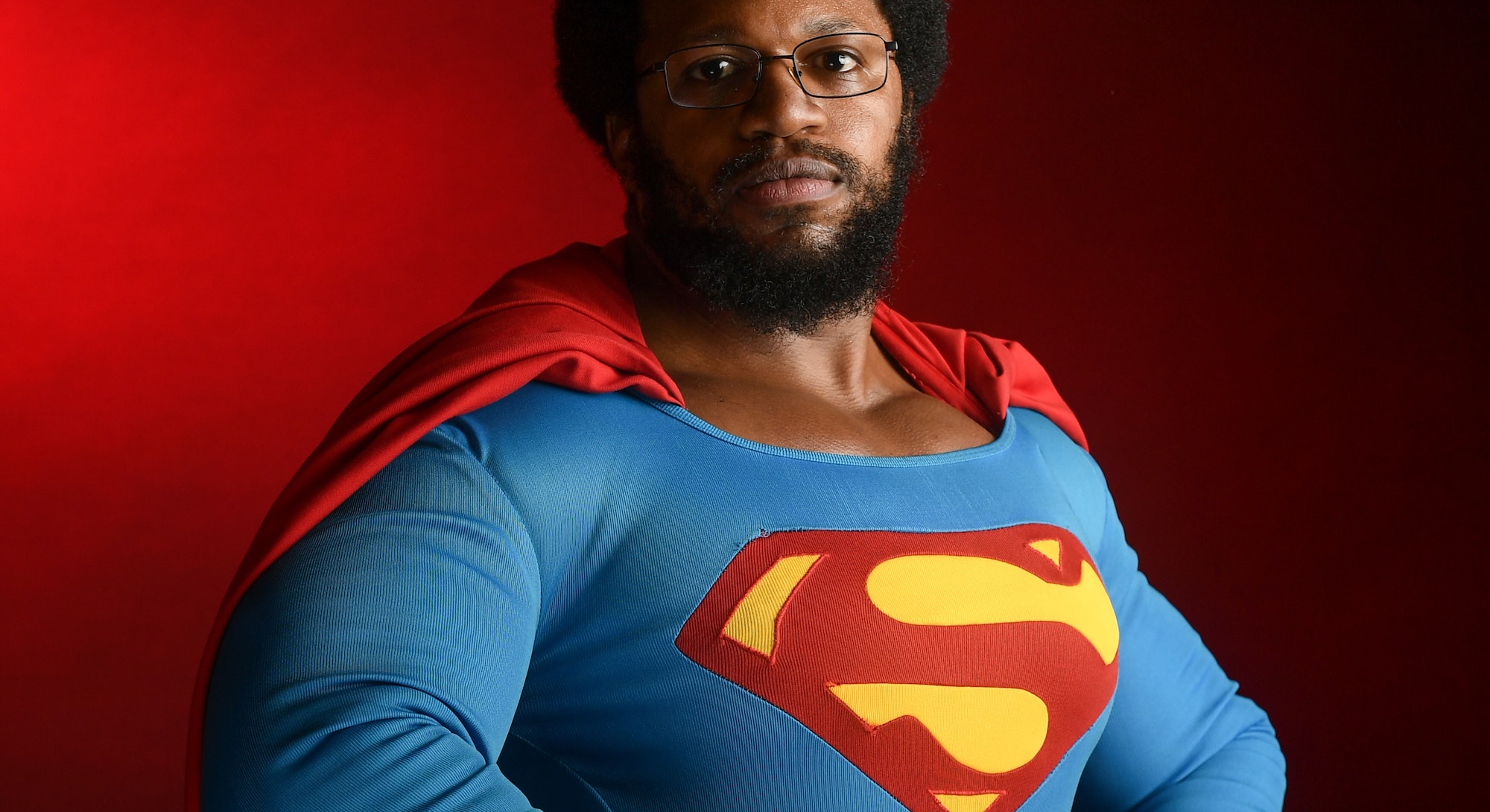 Superhero universes and fantasy worlds have always been about possibilities.

But for many people of color, one thing has been inevitable: The heroes, and most of the villains, are white.

In worlds where heroes fly and sabers are made of light, it’s somehow harder to imagine a person of color in any kind of important thematic space. The history of pop culture’s systemic leniency towards white heroes in white stories — or replacing people of color, in a practice known as “white-washing” — means ethnic minority fans are often left looking for themselves in the margins, or in the B-plots and side characters who rarely, if ever, get their moment to shine.

In a year of real reckoning against systemic white supremacy in all facets of our everyday lives, Inverse asked over a dozen of our favorite creators, writers, actors, and artists of color a question inspired by our favorite stories in the multiverse: What if things were different?

What if the heroes weren’t always white?

What if the reboot reflected our real world?

What would you change in pop culture's long history to be more inclusive?

Below, Inverse asked 17 creators of color ”What if?” to reveal a parallel unverse where our favorite stories resonate just a little more.

Director, Spider-Man: Into the Spider-Verse

“I love Star Trek and I think they do a pretty good job of inclusive casting, but I always want to see them push even farther showing how diverse the 23rd or 24th century really would be, if we make it that far. I think you’d see a much wider range of ethnic types as captains, officers, and have it be more matter-of-fact. Really make a point of showing an Earth where none of those divisions has any meaning anymore.”

"I know as a big Star Wars fan I always wanted to see a prominent Jedi that looked like me. Mace Windu was such a minor character without a real storyline of his own. But what if the Skywalker family was a family of color? Or Obi-Wan was a person of color? That would have been huge."

“I would have loved to see the inclusion of a smart, well -developed, strong black female character like Angela Abar from HBO’s Watchmen in the actual Watchmen comic. And the inclusion of a similar black superhero within the 2009 Watchmen movie. Often in the sci-fi world, diversity is omitted by saying ‘they’re in space, there are no races in space,’ yet every character is white. It’s time for that to change.”

“So what if...Belle from the live-action Disney remake of Beauty and the Beast...was Asian? The same fairy tales and fables exist across different cultures and languages for years, and before Mulan, most of my friends and I heavily identified with booksmart, adventure-loving Belle. A non-white Belle would have LAYERS about the town talking about how she's so beautiful but so different. The studio is picking up on casting non-white actors for named characters, but Beauty and the Beast holds a dear place in the audience that grew up rewatching [it]. They could have the ball rolling sooner.”

“As much as I appreciated Storm as a member of the X-Men, I would have liked her to have taken charge as a prominent character. With her parents being both from Africa and the United States, I think the plight of Africans versus African Americans is an interesting dynamic that could have played out well in comics and cartoons.

"There's a moment in the cartoon I think could have been perfect. It was Season 2, Episode 16, 'Whatever It Takes.' Instead of focusing on Storm's village and backstory and what made her so powerful, it turned into a very passive [episode], forgettable by most. This is where I checked out of the cartoon because of such a missed opportunity.”

“I've always felt that the James Bond film Live and Let Die was a lost opportunity to bring in a Black actor to take over the role. I would have loved to see what Calvin Lockhart could have done as Bond, and given that the film was essentially a blaxploitation movie anyway. It would've made sense.”

“There was diversity in Game of Thrones, but King’s Landing is supposed to be the biggest city in Westeros and there’s no non-white folks. It would have been nice to see diversity in the inner circle, maybe Varys or Little Finger. I don’t want to take away from all the great actors, but you have all these fantastic characters who had important roles, and everybody’s white. Having a diverse population wouldn’t have taken away from the story.”

“In Frank Herbert’s Dune, I think it would have been poignant to make the Freman of Arrakis more visually representative of Africa as a whole. Herbert’s original intent was to make them analogous to Middle Eastern cultures, but the metaphoric exploitation of ‘the spice’ could be applied to the entire continent. Especially the exploitation of its people.

"My Kickstarter with Doug Wagner, Thomas River, takes aim at the legacy of aloof, wealthy spies by presenting an operative born and raised in blue-collar Baltimore instead of a European chalet. That simple pivot resonates throughout his entire character and hopefully innovates on the genre.”

“I’m thinking of Finn from Star Wars. This character made one of the most compelling choices in the entire saga: A Stormtrooper decided not to be one, choosing to no longer be a faceless participant but to exercise his agency for what he believes is right. His desertion should have provoked a far more intense reaction from the First Order. The effect of which could have been tied to the later Stormtrooper mutiny in the third film. Finn’s choice could have inspired it, showing the snowball effect his first act of bravery had on the galaxy. This is all especially regrettable, given the brilliance of John Boyega. I think they tried to do right by Finn, it seems like they were simply pressed for time in the writing. But still, I wish it would have turned out differently.”

“I would love a Black Wolverine in the next X-Men film. The Mutant story is about Civil Rights. Magneto and Professor X are based on Malcom X and Martin Luther King. So amplify those tones already in the comic. As far as Wolverine and Sabertooth, it’s a brother relationship. It would be the same story with just a little seasoning as far as applying more Black culture inside of the story.”

“Growing up, not being able to see Latinas in genre, or women in powerful roles in general, lit a fire under my ass to create that representation for myself. I literally had to put on spandex and beat up bad guys to become the superhero I didn’t see. It’s hard for me to answer because that lack of visibility informed my present career and mission statement, so I wouldn’t want to butterfly effect myself into complacency. Instead, I prefer to ask ‘What changes can I make now?’ I must continue to create that representation so future Latinx generations, and communities of every color, know they belong, in every genre, as superheroes of their own valuable stories.”

“One of the graphic novels that changed the way I approached stories was Watchmen. I was always curious how this world affected people of Asian descent. The only Asian presence we see are the Vietnamese who surrender to Doctor Manhattan. But what were superheroes like in Asia?

"In this global crisis, Adrian Veidt is staged to the framework of the Cold War, from a Western perspective. I wondered what the Asian perspective would be. What would a defeated Vietnam signify for the rest of Asia, especially as the Americans have a god-like soldier in their ranks? What if Asia got their Manhattan? On a more local level, were there Asian-American vigilantes among the Asian community to deal with their specific issues? As the superhero community was already facing public criticism, would the rules outlawing vigilantes fueled tension between the heroes of different races, or unite them even closer?”

“What if, back in the day, the powers that be never changed the Black Ranger? The Black Power Ranger should have been Black and proud. The show got all this flak because, obviously, but in all honesty, why didn’t they celebrate it? I remember going to lunch with one of the executives of Power Rangers recently, and this person asked me, ‘What if we made a Black Ranger Black again? Would that upset people?’ I said, ‘Why would that upset people?’ It’s like you can’t be proud. Why can’t we find joy and excitement being Black and proud? Obviously race is a hard conversation. There’s a lot of pain and hurt. But we judge people who are Black and proud, Asian and proud. We judge people for finding their wings.

"I told the executive, ‘If you’re making this person a hero, who has a story and journey to share, why wouldn’t people love it?’ If you make these people heroes, no one can deny it.”

“In Lord of the Rings, I’m like, are there any people of color? Quite frankly I wish it wasn’t a topic of conversation. That it wasn’t an issue. Obviously there’s telling stories in a specific time and place and casting should reflect that. But in fantasy, where the world is whatever world we make it, how badass would it have been to have Bruce Lee be a Jedi?”

“I think a Black Harry Potter would have been freaking amazing. I imagine if most of the people of that franchise were a person of color, things would be so different right now. People don't realize how much Hollywood influences the real world. Our jobs are to tell people what to think. If we're feeding people the same stories of the same people with the same backgrounds, we're telling them that's what the world should look like. That's not okay. It makes a lot of people in the world wonder where they are, where do they fit into the world.”

“Sci-fi is my dad's favorite genre. He grew up reading comic books to learn English when he got to this country. Game of Thrones. I loved that series, but I'm like, ‘Isn't there more room for a major Asian character here?’ I'm ready for that. I really love Kelly Marie Tran. I think she's lovely. I'm proud of her for making her way into this huge franchise [but] I think there could be more, I always think there could be more. The sister story! I am a sucker for stories about sisters and I really wanted to see more about her and her sister.”

“I'm of the age when shows like Knight Rider were on TV. That was the closest thing to a comic book mythos — with the car and its gadgets and the fun factor of that. I thought it would be cool if the car, KITT, had a more inclusive voice, maybe James Earl Jones to connect with people of color. Wouldn't it be awesome to have a character that's a person of color as an antagonist in either Robocop or The Terminator?

"But something like that has to be created from the ground up to feel more natural, and can't be shoehorned in. That's why Bitter Root was so important to create from scratch. It was built from the very beginning to be inclusive. It's a natural progression and doesn't feel forced."