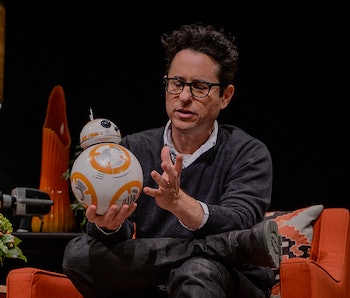 There’s no doubt that Star Wars fans around the galaxy are in a state of denial. Even if you loved everything about The Rise of Skywalker, it might be hard to believe that this nine-movie saga is really over. And so, to cope with the denial that it’s really over, fans now are wondering if a different cut of the movie might exist that radically changes how we feel about it.

Confused, let’s break it down.

Spoilers ahead for The Rise of Skywalker.

Why is “Release the J.J. cut” trending online?

The reason why some Star Wars fans now think a highly different and repressed J.J. Abrams cut of The Rise of Skywalker exists mostly comes from one Reddit post citing a “source that worked on TROS who claims Disney forced Abrams to make a different movie than the one he wanted, and even made edits to the film without his knowledge right before its release.

The quote that sticks out is an overheard meeting in which Abrams allegedly is so mad about studio-mandated changes that he says the movie’s director’s credit may as well just read “Directed by Lucasfilm,” and not him. It also claims that Disney execs hated Babu Frik and “thought he would be the new Jar Jar.”

More deviously, the “leak” argues that Disney purposefully ruined Rise of Skywalker to tarnish J.J. Abrams reputation before he starts working with Warner Bros. on relaunching its DC movie universe. The reason? Disney is apparently worried that Abrams could turn DC into a legitimate Marvel Studios competitor.

Now look, this is incredible gossip. The problem is, everything in this Reddit post is not only heresy, but also, very possibly, fabricated.Inverse reached out to mega-Star Wars leak expert Jason Ward, who accurately leaked almost the entire plot of Rise of Skywalker before its release, and he called the post “bullshit, from top to bottom.”

Now, say what you will about Jason Ward and his website Making Star Wars, but nearly every single behind-the-scenes leak he reported on for The Rise of Skywalker ended-up being true, in terms of what we saw on screen. He may not get everything right, but it seems he does fact-check his anonymous sources in a way that the “Abrams cut” leakers have not.

The Rise of Skywalker is not like Justice League

The notion that there is a totally separate cut of The Rise of Skywalker, and that this “Abrams cut” is akin to the fabled “Synder Cut “ of Justice League is not only dubious comparison, but also a wildly inaccurate one. Even if the existence of a completed “Synder Cut” of Justice Leagues exists (which we’re pretty sure it does), the situation is nothing like Rise of Skywalker.

In terms of actual production, the only person who directed The Rise of Skywalker was, from soup to nuts, J.J. Abrams. It’s true that Colin Trevorrow was originally slated to direct Episode IX, but he was taken off the project during pre-production. Contrast this with Justice League, where Zack Synder left the project due to a family emergency and Joss Whedon was hired to finish the film. In this way, Justice League has more in common with Solo than it does Rise of Skywalker. But, for some reason, no one is demanding a release of the Miller and Lord cut of Solo, even though, some portion of that probably exists.

The only similarity between Justice League and The Rise of Skywalker is screenwriter Chris Terrio was on both projects.

The idea that a tonally different version of a movie is repressed by a movie studio, only to be replaced by a milquetoast, watered-down film is almost unheard of. In terms of genre movies, the best example is probably the Richard Donner cut of Superman II, in which Donner was replaced by director Richard Lester and whole portions of the movie were reshot. (Including deleting Marlon Brando from the final film.) But, again, this kind of thing isn’t super common.

As film buffs and sci-fi nerds, we tend to focus on these outliers because they represent interesting, alternate dimensions of our favorite stories. But, for the most part, when you watch a “director’s cut,” of a huge blockbuster, you’re usually only getting a few more scenes. The differences being suggested in so-called “Abrams cut” of Rise of Skywalker seem way too different to be reasonable.

J.J. Abrams, Maryann Brandon, and Chris Terrio are all being pretty transparent in interviews

For the most part, nearly everyone on the production side of The Rise of Skywalker is being transparent and forthright in interviews. Screenwriter Chris Terrio has admitted that several things he and Abrams were writing didn’t make the final screenplay. Terrio also admitted that they toyed around with the idea of making this into two movies. Meanwhile, J.J. Abrams’ editor, Maryann Brandon, has doubled-down on the idea that The Rise of Skywalker was made on a much smaller time budget than The Force Awakens; 3 months fewer to be precise. Brandon also thinks that critics calling the film “fan service” are correct, but she also doesn’t think that means the movie is bad.

Abrams has also basically copped to being short on time in multiple interviews. Plus, Brandon has again has pointed out that Rise of Skywalker was edited on set to expedite the overall process and allow them to hit their deadline for a December 20th release.

Why the myth of the J.J. cut will stick around anyway

Obviously, if you were disappointed with The Rise of Skywalker, it’s a knee-jerk reaction to think a much better version of the movie exists somewhere out there in the Force. And, to be sure, there are all sorts of behind-the-scenes things we may never know about relative to how this film was hurriedly put together. But, it’s intellectually dishonest to pretend a repressed version of the movie exists based on one lengthy Reddit post.

Were there deleted scenes we haven’t seen yet from The Rise of Skywalker? Almost certainly. Were there some studio-mandated script changes? Possibly. But, none of that means there’s a smoking-blaster that proves Disney, or anyone else, murdered a purer version of the film. In short, The Rise of Skywalker is perhaps, exactly what it looks like: A huge Hollywood film, part of an unwieldy franchise that was made on an extreme deadline. Sometimes, these kinds of crazy deadlines have produced amazing results. (1982’s Star Trek II: The Wrath of Khan comes to mind.) But, for the most part, a rushed film will appear rushed.

Just as Poe decided to lightspeed-skip the Falcon through the galaxy, Lucas, Terrio, and Brandon had to lightspeed-skip the production of this movie as fast as they could. Rey warns Poe that driving a starship that fast can damage the ship, or in some cases, destroy it. And in the case of The Rise of Skywalker, she may have a point.

Star Wars: The Rise of Skywalker is out in wide theatrical release now.