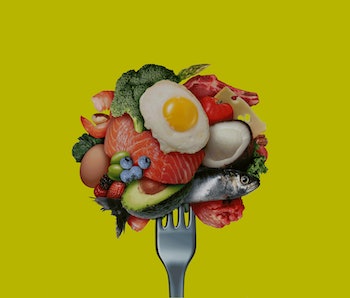 One of the buzziest diets of 2019 was the ketogenic diet, a low-carb and high-fat way of eating. Although it was originally developed to help treat epilepsy in children, many have turned to the keto diet as a way to lose weight.

However, while the keto diet has been linked to a number of benefits including brain health and flu-fighting, the diet doesn’t always yield weight loss results. And when it does, that loss doesn’t always last: In its recent round-up of the top diets of the year, the U.S. News & World Report ranked keto as the third “best fast weight-loss” diet, but left it off the actual “best weight-loss” list.

So why haven’t you actually lost any weight while going keto? You may be making one of these five mistakes.

You don’t actually go into ketosis

The keto diet hinges on the idea that, once one replaces carbs with saturated fats and a moderate level of protein, their body will go into ketosis, a natural metabolic state where the body starts using fat rather than carbohydrates to produce energy. The liver turns fat into ketone bodies, which then fuel the brain.

After about two to four days of going keto, the body gets used to relying on ketones and becomes more efficient at burning fat. To get there, a person has to limit their carb intake to 20 to 50 grams a day and increase their intake of fat to about 155 grams a day, depending on their body size.

However, if the amount of carbs exceeds that amount, then the body can still produce energy from glucose and doesn’t need to go into ketosis. In turn, all that added fat intake will not be used to produce energy since the body still has enough carbs to rely on.

You eat too much protein

Although low-carb diets are often associated with a high-protein intake, that’s not the case for the keto diet. Instead, only 20 percent of your nutritional intake should come from protein, making it more of a moderate protein intake, according to the Harvard School of Public Health.

If one eats too much protein, then their body will turn all that protein into sugar, which is another source of carbohydrates. If that happens it doesn’t matter if one cuts out the bread and chows down on a ton of steak — the body will use those carbs to produce energy, rather than fat.

You’re consuming too many calories

Going on a keto diet doesn’t just mean all one needs to do is cut carbs and then they’ll lose weight. If weight loss is the goal, one has to be mindful about their overall calorie intake.

That’s especially true if a person is simultaneously increasing their intake of fat: High-fat foods contain more calories since fat has twice the amount of calories per gram compared to protein and carbs.

Therefore, keeping track of how many calories you consume a day is crucial to meet your goals.

Another reason why you’re not losing weight on a keto diet is a bit counterintuitive: Although one might think that decreasing the intake of calories altogether would be helpful to lose weight, that is not always the case.

When one doesn’t take in the required amount of calories for their body weight, then the body can go into starvation mode — which essentially decreases your metabolism. Once the rate of metabolism slows down, a person will have a harder time burning off calories.

You’re eating one of these foods

There are certain types of food to avoid while on a keto diet, as they could interfere with the number of carbs you’re allowing yourself every day.

Experts advise that keto-hopefuls avoid dairy products, like milk and yogurt, since they contain carbohydrates. It’s also advised that, on a keto diet, one avoids sodas, cocktails, beer, and juice, while zeroing in on water. Processed meats can also contain “hidden” carbs, while fruits high in sugar, like oranges and pineapples, are also to be avoided.

Ultimately, if you’re interested in losing weight in a healthy way and are considering the keto diet, you should talk to your doctor about whether or not it’s the right choice for you. Good nutrition is the key to a healthy life, but not every diet is best for everyone.

More like this
Mind and Body
8.14.2022 3:00 PM
Cultivating 2 habits in your 30s may boost mental health in old age
By Sarah Sloat
Mind and Body
8.7.2022 10:00 AM
Nordic Diet vs. Mediterranean Diet: The health benefits of eating like a Viking, explained
By Duane Mellor, Ekavi Georgousopoulou and The Conversation
Mind and Body
8.17.2022 6:05 PM
Does chewing gum burn calories? The answer may be hard to swallow
By Allison Parshall
Related Tags
Share: