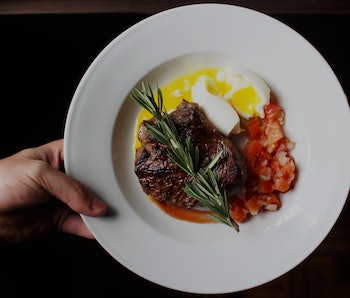 The world of dieting is consumed by the low-carbohydrate, high-fat ketogenic diet. But despite the keto diet’s immense popularity, some researchers and dieticians remain concerned about its safety. It’s not just trainer and television personality Jillian Michaels who’s having beef with keto. A new study suggests people should be cautious when adopting the diet — especially women.

That’s because males and females may react differently to living on a ketogenic diet, according to research presented Sunday at the annual meeting of the Endocrine Society by researchers from the University of Iowa. Their conclusion was based on research on mice: Female mice were less likely than males to experience significant fat loss and were more likely to exhibit impaired blood sugar control in their experiments. The results of this unpublished study, the team writes, could explain discrepancies in this diet’s success rates.

Co-author and lead investigator Jesse Cochran, a research assistant at the University of Iowa, tells Inverse that, while it’s difficult to say exactly how an individual might respond to keto, this research suggests that people should consult a dietician before starting the diet.

“It is important to think critically when reviewing this information and possibly wait a bit for the science to catch up and provide an explanation,” Cochran says.

While both men and women claim the keto diet works for them — many celebrities included — it’s been difficult to replicate their weight-loss results in the lab. Large-sample epidemiological studies conducted by other groups have shown a mixed response, and the few studies that have focused on only women found no correlation between cutting carbs and weight loss. Some dieticians have warned there’s not enough data to definitely say that the dramatic shift in diet is harmless. Potential risks include liver and kidney problems, nutrition deficiency, and too much high-saturated fat.

The goal of the keto diet is to ignite a process in the body called ketosis. A few days after you cut carbohydrates out of your diet and deprive the body of glucose, it seeks an alternative energy source. It begins to burn stored fat, and, in the process, the liver converts fat to ketone bodies. Ketones become the new fuel, and as they accumulate in the blood, the body goes into ketosis. Hypothetically, this is the time where fat burning turns to weight loss.

The results of the new study, says Cochran, may explain why previous research yielded mixed results. In the study, half of the mice went on the ketogenic diet and the other half went on a regular diet as a control. The control diet was seven percent fat, 47 percent carbohydrates, and 19 percent protein by mass. Meanwhile, the keto diet was 75 percent fat, three percent carbohydrates, and eight percent protein by mass.

The weight loss expected from the keto diet only occurred in the male mice. After 15 weeks, the males had a significant reduction in fat mass, but the female mice experienced no changes in weight. Speculating that estrogen could be playing a role, the team removed the ovaries of some of the female mice and tested the diets again. Those females, lacking estrogen, responded to the keto diet with the expected patterns of weight and fat loss.

“Our studies suggest that sex hormones might modulate the way that male versus female mice respond to ketogenic diets,” Cochran says.

One very concerning effect emerged from this study: The livers of the male mice on the keto diet had more pronounced signs of fibrosis and fatty storage than the female mice also on the diet. The team found that those males had higher levels of the hormone FG21, which previous studies have shown is expressed and released in response to liver damage, particularly in cases of non-alcoholic fatty liver disease.

This isn’t the first time liver problems have been implicated in the keto diet. Researchers have previously warned that the keto diet could cause liver problems because the diet involves so much metabolization of fat. But the evidence is far from conclusive: in a very small 2007 pilot study, Duke University researchers showed that six months of the keto diet helped improve the fatty liver disease in a group of five patients.

Cochran says that, based on their findings, his team would not recommend the diet to either men or women until the diet’s effects and mechanisms are better understood.

Clearly, more research is needed before keto can be declared a one-size-fits-all approach to good health. Cochran and his colleagues suspect that the weight loss in the male mice was due to compensatory mechanisms that develop in the liver as a consequence of its increased fattiness. The estrogen in females might have protected them from this liver damage — and thus prevented them from losing weight.

“Taken together, it is possible that the weight loss that we see is secondary to a hormonal response of the liver to fact accumulation,” Cochran explains. “Therefore, more work is needed before these diets can be recommended in humans for weight-loss purposes.”

Since the initial use of ketogenic diets (KD) as adjunctive treatment for epilepsy, these diets are being increasingly used to promote weight loss and to reduce the risk of metabolic sequelae of severe obesity. Typical KD are very low in carbohydrate and high in fat, promoting hepatic production of ketone bodies. Most animal studies tend to be performed in male mice, and few studies have evaluated gender differences in response to KD. To explore sex differences in response to KD, female and male wild-type mice on the C57BL/6J background were fed either a control diet (CD- 7% fat, 47% carb., 19% protein) or KD (75% fat, 3% carb., 8% protein), following weaning. Females on the CD manifested higher levels of circulating β-hydroxybutyrate (β-HB) than males (2.86-fold, p<0.05). Circulating β-HB concentrations increased with KD in males and females (1.30-fold & 5.05-fold, p<10-4& p<0.01 respectively) with higher concentrations in females. After 15 weeks of feeding, females on KD displayed an increase in body weight (1.07-fold KD vs. CD, p<0.05) while body weight declined in males (0.88-fold, p<0.05). Nuclear magnetic resonance (NMR) analysis revealed elevated lean mass in 18-week old females (1.07-fold, p<0.05), but a significant reduction in fat mass in males (0.49-fold, p<0.05) relative to sex-matched mice on CD. The female mice on KD developed impaired glucose tolerance with a 1.35-fold increase in glucose tolerance test area under the curve (GTT AUC) (p<0.001) relative to CD females. In contrast, fasting glucose levels were lower in males on KD (131.8 ± 12.5 mg/ dl vs. 169.2 ± 6.3 mg/dl, p<0.05). Despite no significant change in GTT AUC, the male mice on KD displayed elevated blood glucose concentrations 30 minutes after injection relative to males on CD (344.9 ± 18.7 mg/ dl vs. 272.0 ± 10.31 mg/dl, p<0.05). However, after 120 minutes, blood glucose levels returned to initial levels. To further investigate the role of estrogen in this sexual dimorphism, female mice were ovariectomized (OVX) and randomized to receive either a CD or KD after weaning. At 15 weeks old, OVX mice on KD displayed decreased body weight (0.84-fold, p<0.0001) and fat mass (0.65-fold, p<0.001) relative to CD-fed mice. Despite changes in body composition, OVX mice on KD still exhibited impaired glucose tolerance with a 1.4-fold increase in GTT AUC comparable to OVX mice on CD (p<0.05). In conclusion, significant sex differences exist in terms of body composition and metabolism in response to ketogenic diet, which may partially be attributed to estrogen.

More like this
Mind and Body
8.7.2022 10:00 AM
Nordic Diet vs. Mediterranean Diet: The health benefits of eating like a Viking, explained
By Duane Mellor, Ekavi Georgousopoulou and The Conversation
Mind and Body
8.3.2022 1:35 PM
Is collagen worth taking? Scientists reveal the ideal method for building the protein
By Katie MacBride
Mind and Body
7.31.2022 2:00 PM
Four science-backed methods to feel less tired during the day
By Sarah Sloat
Related Tags
Share: