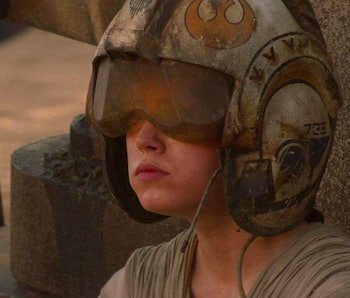 The Rise of Skywalker is jam-packed full of references and retcons to the Star Wars movies that came before it, but there’s one Easter egg you might have missed. A moment late in Episode IX connects back to the first time we met Rey in Episode VII: The Force Awakens in a powerful way.

Warning! Spoilers ahead for The Rise of Skywalker.

Near the end of Star Wars: Episode IX, after Rey gets the pep talk she needs from Luke Skywalker’s Force ghost, she hops in Luke’s old X-wing starfighter and heads for Exegol to confront Emperor Palpatine and save the galaxy. On the way there, we see Rey flying Luke’s ship through a particularly bumpy patch of outer space while wearing his iconic rebel pilot helmet.

It’s an awesome visual that connects Rey to the original trilogy and the war between the Rebel Alliance and the Galactic Empire. But that’s not the only way that helmet connects to an earlier Star Wars movie — because it’s not the first time we’ve seen Rey wearing one of these helmets.

We saw something very similar in one of Rey’s first scenes in Star Wars: The Force Awakens.

When we first meet Rey she’s an orphaned scavenger living out of a busted AT-AT Walker on the desert planet Jakku. After looting an old Star Destroyer for parts and trading them for her dinner, Rey puts on an old rebel pilot helmet and eats her sad meal alone. She’s about to become the most important person in the galaxy, but for now, she really is nobody.

But that helmet may have been our first clue that Rey was more important than she realized. It wasn’t actually Luke’s helmet, of course. Rather, as some fans soon realized, it belonged to a female starfighter pilot named Dosmit Ræh.

We don’t know much about Dosmit Ræh, but we do know she was part of a rebel group that opposed Emperor Palpatine and that she also flew an X-wing. She presumably fought and died and the battle of Jakku, which took place after Return of the Jedi and marked the actual end of the Empire.

Some have even speculated that Rey took her name from Dosmit Ræh’s helmet, though that seems like a stretch.

Regardless, Rey putting on Luke’s old helmet has been a long time coming. It’s a moment this character has been dreaming of since before we ever met her, and one that fans have anticipated since the opening moments of The Force Awakens.