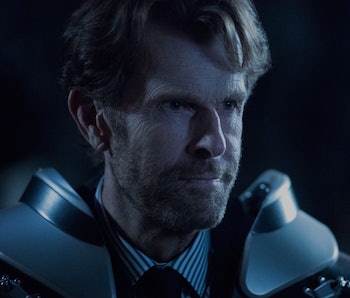 It was a twist that few, if any, saw coming. In “Crisis on Infinite Earths,” the five-part mega-crossover of The CW’s shared “Arrowverse” of DC TV shows, Kevin Conroy’s live-action debut as an aged Bruce Wayne/Batman came with a big, dark twist that revealed a very different Batman from the one he voiced on Batman: The Animated Series.

But in the context of the crossover, it was a necessary evil.

Spoilers for “Crisis on Infinite Earths, Part 2” ahead.

In “Crisis on Infinite Earths, Part 2,” which aired as an episode of Batwoman starring Ruby Rose as Kate Kane, the heroes of Arrow, The Flash, Supergirl, Legends of Tomorrow, and Batwoman regroup after the heroic, selfless sacrifice of Oliver Queen (aka, the Green Arrow).

But there’s hardly time to mourn because the Monitor needs the heroes to assemble the “Paragons” — seven heroes spread throughout the multiverse who are “beings of the purest will.” The Paragons are a concept from the original 1985 Marv Wolfman and George Peréz comic book miniseries Crisis on Infinite Earths, the basis for this year’s special.

Luckily there’s already a few Paragons present: Kara Zor-El (aka, Supergirl) and Sara Lance (aka, White Canary) are some of the Paragons. Superman of Earth-96, played by Brandon Routh (reprising his role from the 2006 film Superman Returns) is another.

But one Paragon is known only as “the Bat of the Future.” There’s one Batman everyone, including the Monitor, thinks it is: The Batman of Earth-99, an Earth that exists in a future timeline. Kara and Kate visit Earth-99, and are disappointed by what they find: Bruce Wayne, played in live-action by Batman: The Animated Series voice actor Kevin Conroy, has become a billionaire hermit in an exoskeleton. We soon learn why Bruce needs such a contraption just to move.

As Kate and Bruce become “reacquainted,” Kara learns from Bruce’s study the reason this Bruce Wayne exudes such dark, chaotic energy. In this Earth, Bruce Wayne became a paranoid Batman, willingly killing his enemies, identified by keepsake “trophies”: The Joker, the Riddler, and Mr. Freeze. He even killed Clark Kent, who damaged Bruce’s body badly in their final fight, hence the exoskeleton (lifted from the 1996 graphic novel Kingdom Come).

“A strange visitor from another planet comes to Earth with powers and abilities far beyond those of mortal men? Clark always said yes to anything. The badge. Or a flag. We gave him too much power. My parents taught me a different lesson. Life only makes sense if you force it to.”

(Catch that? “Life only makes sense if you force it to” is an Easter egg to Frank Miller’s The Dark Knight Returns and Ben Affleck in 2016’s Batman v Superman: Dawn of Justice. And seconds later, Bruce reveals a bit of Kryptonite, “from the old hometown,” a line by Gene Hackman’s Lex Luthor from 1978’s Superman.)

While no one is questioning Conroy’s performance, some fans may be confused, angry, and frustrated that his Batman plays the villain to Ruby Rose’s Batwoman, who learns that she is the Paragon they’re looking for all along. That Conroy also didn’t resemble his equally iconic future-Batman, from the series Batman Beyond, who plays mentor to next-gen Batman Terry McGuinness, could also feel like a letdown.

But let’s get a few things straight. “Part 2” of the special was airing as an episode of Batwoman, so of course Batwoman is the Paragon. These TV shows are not just platforms for the crossover train to stop between. They’re still episodes of a television show starring a specific protagonist. “

“Part 1,” a Supergirl episode, began on Earth-38 because that’s where Supergirl takes place. The next episode, “Part 3,” will finally make or break on its promise to show Flash “vanishing” in the crisis because it will be an episode of The Flash. What else was Batwoman going to do when its dramatic question is “Who is the Bat of the Future?”

Beyond that, there’s also the matter of the Arrowverse writers and producers upending expectations. “Crisis on Infinite Earths” is very much about making fans’ dreams come true, but to just give fans everything is the most boring outcome imaginable.

By allowing Conroy, an accomplished theater actor, who only happened to have been excellent at cartoon voice work, to show a different range as Batmanpays respect to his talents as an actor. To just make him do the same stuff he’s always doing isn’t just boring, it’s insulting.

Lastly, the twist with Batman only makes the Kingdom Come reference cooler. In that book, Batman aligned with his former enemies, including Catwoman and Riddler, causing tension between himself and the rest of the Justice League. It’s later revealed to be a gambit so Bruce can get closer to their evil plans.

That twist is fine for Kingdom Come, a story with its own set of rules and demands to satisfy. “Crisis on Infinite Earths,” the TV special, is a different beast. By acknowledging “evil Batman” and keeping him that way, it is a totally fresh take on an extremely familiar character that’s already had every unique remix thought possible.

Even Kevin Conroy found it interesting. As he told Entertainment Weekly in a preview interview, “In this, I explore a lot of dark corners of Bruce Wayne … different than the ones I explored on Batman Beyond. I never approached this character from that physicalized aspect.”

Making Kevin Conroy’s Batman “evil” isn’t ruining anyone’s childhoods, yours or mine. It’s making everything, including the rare opportunity to have Kevin Conroy appear onscreen in his most iconic role, far more interesting than any of us ever could have thought. And that it’s to help make Ruby Rose’s incredibly good Batwoman — and she’s very, very good — become more heroic is exactly the kind of selfless deed that Batman would be proud of.

“Crisis on Infinite Earths, Part 3” premieres tonight, at 8 p.m. Eastern on The CW.