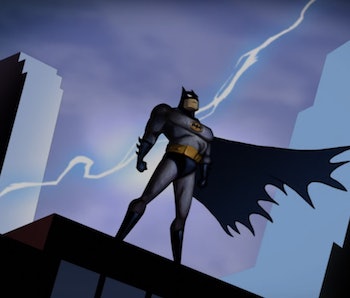 Chief among the many, many, problems with Batman v Superman: Dawn of Justice was the generous time spent on Bruce Wayne’s origin story. It was just a few scenes in the opening credits, but with a slow and indulgent pace, it felt like all of Batman Begins crammed into a grand movie that promised Batman v’ing Superman to kingdom come. (They “v” for like seven minute). With Batman’s story definitively told, not to mention the Gotham TV series airing on Fox, does anyone need a refresher course on Batman?

The writers behind the animated series didn’t think so. A hero on Reddit uncovered the series bible — in TV, writers use comprehensive documents called “bibles” for reference — for the Emmy-winning Batman: The Animated Series, which aired in 1992 for three seasons on Fox Kids. In the bible’s first few pages is the show’s mission statement, in which the writers unambiguously resolve to ditch telling Batman’s origin entirely.

“Chances are, anyone who’s reading this already knows a considerable amount about Batman,” it reads, almost as if it knows human beings are capable of remembering things. “Now that we’ve dealt with his origin, we can put it out of the way for the remainder of the series. We’ll say it here first — in the run of our series, we will do NO STORIES ABOUT BATMAN’S ORIGIN.”

The document goes on to cite the Tim Burton films released just before production on the series began – and decades of comics – as reasons not to tell the same story over and over again. How is this from 1992, and why aren’t we doing this in 2016?

The writers did sort of go back on their word, however. In episodes like “Perchance to Dream”, the animated series did explore Bruce and the pathology of his deceased parents, but it wasn’t out of a need to explain or catch viewers up. As all good writers do, they used it to explore a character’s rich mythology, and no one is richer than Batman.