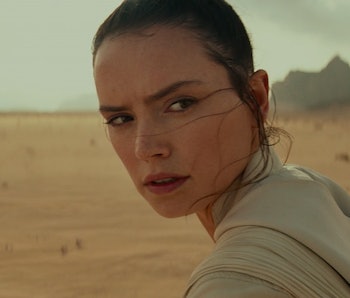 When a lightsaber doesn’t work, could a Jedi use their fists? A small bit of insight into Star Wars: The Rise of Skywalker hints that Daisy Ridley’s Rey could actually go Billy Blanks on Palpatine’s ass, which would be a fun visual to see from a galaxy far, far away.

Let’s be clear. We’re not saying Rey, once again surrounded by old, scowling men who want her for her Force powers, will sock Palpatine in the jaw. We’re saying it’s theoretically (and physically) possible. Just hear us out.

Speculative spoilers for Star Wars: The Rise of Skywalker ahead.

On Tuesday, Entertainment Weekly published a long feature into Star Wars: The Rise of Skywalker. Among several revelations, including when in the timeline the film takes place (spoilers: a year after The Last Jedi), EW reported that Daisy Ridley continued her kickboxing training, which she first took up after landing the role for 2015’s Star Wars: The Force Awakens.

While it’s not unusual for the star of a big action movie to take up physical training, what is interesting is that EW said Ridley continued kickboxing specifically for The Rise of Skywalker.

Ridley trained in kickboxing for the final chapter as well, but says the emotional toll of Rey’s journey was more difficult than any combat scenes. “It’s a heavy story for Rey,” Ridley says. “There were days where I was literally like, “I can’t do this, I’m so tired, I don’t know if I can like reach that emotion again.”

Based on the trailers for The Rise of Skywalker, we know Rey is going to kick a respectable amount of butt. But whether her butt-kicking will be actual, literal butt kicking is yet to be determined. The Jedi, of which Rey is on her way to becoming, have rarely fist-fought in any known Star Wars media. It’s either lightsabers or Force powers, or nothing at all. It’s only been The Mandalorian where we’ve seen any actual live-action Star Wars punching.

But what if, and hear us out on this one: In the throne room where Palpatine brags about not being dead and exudes all the Force energy he possibly can, Rey powers through it like she’s walking through a hurricane, and just punches him? Rey is a Jedi whose previous exploration of the Force scared even Luke Skywalker. That means she’s totally, absolutely capable, of punching Palpatine in the ol’ kisser, right? Right. Moving on.

Throughout the new Star Wars trilogy, Ridley has taken up some very specialized physical training that reflects Rey’s journey with the Force. While there are no Tae Bo gyms on Jakku (that we’re aware of), it is a perfect catch-all that gets anyone into shape through focus on cardio and upper- and lower-body movements. In The Force Awakens, the then 23-year-old Dasiy Ridley took up kickboxing and rock climbing, which mirrored Rey’s survival as a scavenger. Lucasfilm’s Kathleen Kennedy also said at a press conference in Japan that Ridley studied Bōjutsu, or Japanese staffs, for her signature weapon.

For 2017’s The Last Jedi, Ridley trained with Chinese martial artist Liang Yang, whom she called in a now-deleted Instagram video a “Wushu fricking master” for her lightsaber training. Fun story: In addition to stunts, Yang has had several roles in the Star Wars universe, including Stormtrooper FN-2199 (“Traitor!”) in The Force Awakens and one of Emperor Snoke’s Elite Praetorian Guards in The Last Jedi. He also fist-fought Henry Cavill in 2018’s Mission: Impossible — Fallout.

For The Rise of Skywalker, more information has yet to spill about what Ridley underwent behind the scenes to become one with the Force. We do know that lightsabers have gotten physically lighter, which allowed the cast to have “the most epic fights in Star Wars.” Sounds great, but you know what would be epic? Rey socking Palpatine like it was Punch-Out.

Star Wars: The Rise of Skywalker punches its way to theaters on December 20.