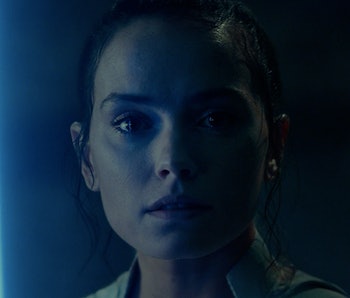 When do you become a Jedi? When you face your fears? Or, when you wear a helmet that covers your eyes and do nifty things with a lightsaber? If you’re anything like most people you know the answer is the former, but in your heart, you think it’s the latter. But don’t worry, it looks like The Rise of Skywalker is going to let us have it both ways. A newly leaked image of a Star Wars toy has explained exactly what is going down with Rey’s Jedi training in Episode IX, and reveals we were all wrong about a certain helmet from one of the trailers.

Mild spoilers for The Rise of Skywalker follow. These are mostly spoilers connected to an officially released toy, so really, you could encounter these spoilers just by going to Target or something. Still. You’ve been warned!

After the final Rise of Skywalker trailer, everyone was buzzing about the mysterious helmet that dropped on the ground when Rey was running through the jungle. Yours truly speculated it was an homage to a similar helmet worn by Princess Leia in Return of the Jedi, but it turns out, that’s not exactly the case. According to several sources online (including Star Wars podcaster, and all-around nice guy, Steele Saunders), this helmet is actually linked to Rey training with a classic Jedi remote.

Created by HotToys, this Rey toy is part of a two-pack that also comes with the new droid, D-O. Detailed images from Hot Toys on the fansite Fantha Tracks confirm that yes, this helmet comes with a blast shield, very similar what Luke first used when he trained with the exact same lightsaber in A New Hope.

So, what does this mean for The Rise of Skywalker? At the beginning of the final trailer, we saw Rey deflecting a laser blast with her lightsaber, and this new toy seems to confirm that blast comes from a training remote. Now, because the training remote is red, it seems like its a different one than what Luke used to train on the Millennium Falcon back in the day. Since this is a new helmet with a blast shield, seems to suggest Rey got this training gear from somewhere else.

Basically, all of this could play into the theory that Rey is being trained by Leia at the beginning of The Rise of Skywalker, and this gear could belong to Leia specifically. The helmet design could be a hint: If Leia favored this kind of helmet in the past, it would be a cool visual reference in Episode IX to have a similar helmet be passed on to Rey. (It all comes back to cool-looking helmets, doesn’t it?)

It’s also possible the origins of this Jedi-training gear will never be explained. It looks awesome and it is clearly meant to evoke Luke’s initial training in A New Hope, but because it’s not one-for-one the same gear, it feels like this could be something J.J. Abrams leaves vague. Either way, the existence of the remote and the blast shield, strongly suggests we’re getting a Jedi training scene. And if there’s Jedi training, then it follows there needs to be a teacher present.

Star Wars: The Rise of Skywalker: Rey Gets a New Helmet is out everywhere on December 20.